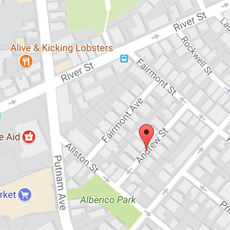 Officers conducted a protective sweep for an invader described as wearing cargo pants and a black hoodie and carrying a gun and knife. Having not found him in the Andrew Street home, officers were searching the surrounding Cambridgeport area, Warnick said.

But the alleged victim was later taken to a local hospital for a mental health evaluation. “It was determined by investigators there never was a suspect,” Warnick said.

The false report had significant impact in the area.

As a result of the police report, police ordered a “Secure & Hold” at the nearby Amigos School, and the school district put heightened security measures  in place for schools and afterschool programs at the Morse School, Putnam Avenue Upper School and Dr. Martin Luther King, Jr. School.

Students at Amigos were held past their usual dismissal time “out of an abundance of caution,” the district said in an email, but shortly after 4 p.m. the hold was canceled and students were allowed to leave. Parents were told to expect delays to bus routes serving Amigos and Extended Day schools.

“Police continue to investigate, but have found no evidence of any danger that would prevent schools and afterschool programs from operating as normal,” the district said. “Please know the safety of our students is our top priority, and we will always err on the side of caution to keep students and staff members safe.”

This post was updated Oct. 16, 2017, with information from Cambridge Public Schools, and then with the news that the home invasion likely did not occur.