Worth some study: 31 ideas for the city emerging from the council campaign 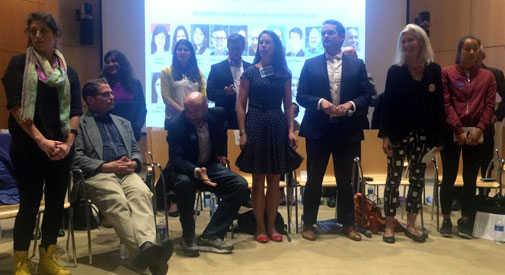 Worth some study: 31 ideas for the city emerging from the council campaign

Even candidates for City Council who don’t get elected – or reelected – have ideas that should survive the campaign at least long enough for thorough consideration, though of course the people proposing the ideas want the chance to pursue them personally from City Hall.

Candidates post these suggestions on their websites and bring them up at forums, which is where we heard or found them, but neither medium is perfect: A posted platform is often static and incomplete as a campaign charges on, and forum discussion is often directed away from what candidates want to talk about, and don’t always allow a lot of detail.

This list is similarly imperfect. Capped at 31 for now, it’s incomplete and subjective, and is focused on ideas that seem new and unique over ideas that are already being explored or have been floating around the city for at least the past council term. While the list begins with some ideas brought up by more than one candidate, it is weighted toward ideas belonging to only one. That means that this list is weighted heavily toward challengers, who have no legislative track record, over incumbents who have been proposing and working toward their own proposals all along. And, indeed, every councillor running for reelection have had exciting ideas and argued them eloquently in the past two years, often with success that has improved the city. And some challengers have made more of a point of explaining their point of view and intent than finding never-tried solutions, and this doesn’t invalidate their candidacies – it’s just a different approach.

Because this list is imperfect, we invite people to contact us or comment below with other ideas from this campaign that are new, unique, compelling and worthy of a deeper look no matter who wins Nov. 7. We will update the list with convincing arguments or corrections and tweet out updates as necessary; but keep in mind that not every idea from every candidate is included here just because it has one or more of the qualities that won others inclusion.

(Some of the text below is taken directly from candidate websites or lightly edited; some is summarized from forum appearances.)

Small-business resource center: A one stop shop to support small businesses has been proposed by Sam Gebru and Vatsady Sivongxay.

Time-shared parking lots: Parking lots that open up to residents when not in use by businesses or other institutions has been raised most aggressively during the campaign by Hari Pillai, but Alanna Mallon and Adriane Musgrave also mention the concept on their websites.

Green infrastructure: Replacing pavement with plants and soils and adding more green spaces to reduce flood risks is an issue most identified with Quinton Zondervan, but Adriane Musgrave is also a proponent.

Sean Tierney: Use Chapter 40R, the state’s Smart Growth Zoning and Housing Production Statute, to develop sustainable, multi-use neighborhoods that allows the city to access state funds as well as insurance against increased school costs that result from population growth due to new housing.

Quinton Zondervan: Institute a tax on foreign buyers of Cambridge property, which could stem land banking and speculation that drives up real estate prices.

Alanna Mallon: Establish community land trusts, in which land is owned and managed by its residents and cannot be resold – it is leased long term with affordability requirements for homeowners, business people or farmers – as implemented in neighborhoods around Greater Boston, such as on Dudley Street.

Marc McGovern: The city can offer gap vouchers to people who need housing but must make the financial leap from what their Section 8 housing vouchers provide and what landlords charge.

Gwen Volmar: Adopt a program in place in Dallas in which the city rents apartments and sublets to Section 8 voucher holders who face “persistent bias.” In addition, the city should aggressively prosecute landlords who refuse voucher-holders if the voucher covers the rent.

Nadya Okamoto: Build a city-sponsored facility to house grad students from any Cambridge university with financing from each: Harvard, Lesley and the Massachusetts Institute of Technology.

Jeff Santos: Establish a rent-to-own program, starting at the Volpe redevelopment in Kendall Square, in which one floor of a rental tower let tenants who pass a credit check, pay rent on time and are good citizens of the building own that unit in year two and pay a mortgage at the same price as their first year of rent.

Adriane Musgrave: Establish a Community Contract Enforcement Office so developers are held accountable for their final projects, specifically so that the community’s negotiated requirements have been implemented.

Sumbul Siddiqui: Work on a regional strategy to incentivize small landlords to maintain rents below market, getting a $1,500 tax credit for each unit rented below market in a two- to 4-unit building.

Gwen Volmar: Create a 24-hour safe keeping center where homeless people can learn about services, store their belongings in lockers and get mail, which makes it more likely for them to get jobs lifting them out of homelessness.

Sumbul Siddiqui: The Community Development Department can offer entrepreneurs and small businesses more traditional and nontraditional finance opportunities, such as partnering with local banks to offer a low-interest loan fund for new retail and restaurant venues, and create a small-business retention program that would offer applicants grants, loans and technical assistance. Memberships to Cambridge Local First can be subsidized for low-income entrepreneurs.

Gwen Volmar: Incentivize developers to separate the retail added into their buildings into “condo” spaces so small-business owners can also own the property that holds their business.

Richard Harding: The city needs to take its nightlife to the next level by piloting 4 a.m. entertainment licenses – with adequate transportation infrastructure to serve it.

Olivia D’Ambrosio: Create two to three arts and culture kiosks that promote Cambridge events and sell reduced or consigned tickets to them.

Olivia D’Ambrosio: A first-in-the-nation “Steam” Exchange program would make access to the arts free by taking a tiny portion of profits from our city’s science, tech, pharma and other STEM-related corporations and redistributing those resources to arts organizations on a percentage-based scale – doubling, tripling or even quadrupling each of our arts organization’s operating budgets and freeing them from the burden of having to sell tickets. People taking advantage would still park at our meters, eat at our restaurants and otherwise contribute to our economy.

Sumbul Siddiqui: Set aside space in city-owned buildings for artists and innovators. (Hari Pillai says he too has suggested this.)

Alanna Mallon: Creating housing districts for artists and other “makers,” where they can live and work in at reduced costs. Start at the MIT Museum, which will be vacant with a relocation to Kendall Square.

Olivia D’Ambrosio: Extend City Council terms to a minimum of three years. Stagger council elections so only three seats are up for grabs in each election cycle. Put in place $10,000 publicly funded elections and limit election season to no more than three months.

Adriane Musgrave: Conduct an evidence-based, government-wide audit to understand how current policies and systems may perpetuate the racial opportunity gap; the Government Alliance on Race & Equity is working with more than 50 governments across the country, including Boston, to acknowledge histories of racial inequity and to restructure government to be more equitable.

Adriane Musgrave: Expand Community Engagement Team hours to full time so each liaison is fully equipped to support and advocate for immigrants and minority residents within city programs, schools and partner providers.

Quinton Zondervan: Establish a carbon fund of payments from large property owners and big developers. The money raised from them to offset their emissions would be used to reduce energy consumption and improve comfort in public and low-income housing around the city.