‘Roman J. Israel, Esq.’: No winning the case of an attorney stumbling after taking stands 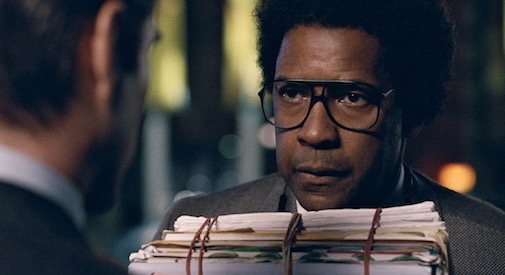 ‘Roman J. Israel, Esq.’: No winning the case of an attorney stumbling after taking stands

“Roman J. Israel, Esq.” has positively no idea what type of film it wants to be. Perhaps it did at one point, but from shooting to airing in cinemas, the intent got lost on the editing floor. Much has been written about the fact that director Dan Gilroy edited 12 minutes out of the official running time, and what’s left remains both convoluted and stalled, trying to preach big ideas without ever following through on them. For all the weighty topics it covers and ideas of the good and evil that lie within all of us, even the most noble, the greatest fault of “Roman J. Israel, Esq.” is how unfathomably safe it is. 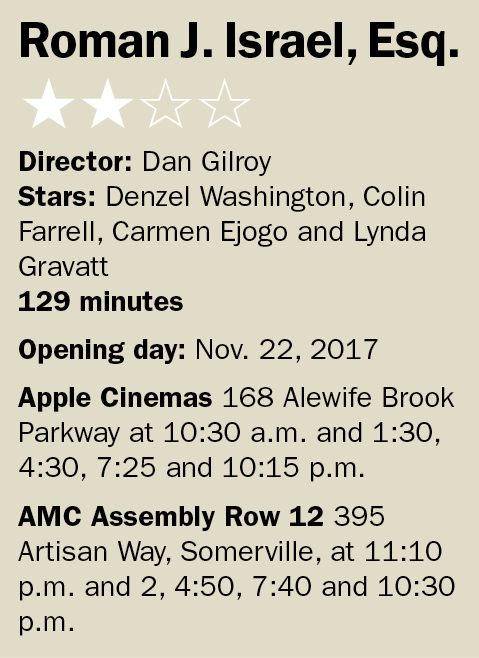 Gilroy’s directorial debut, the cynical and brutal “Nightcrawler,” set the bar impossibly high for this follow-up, which was admittedly rushed from announcement to production to release when it could’ve used more time both in the think tank and on the editing floor. With “Nightcrawler,” Gilroy created a career-defining role for leading man Jake Gyllenhaal in the midst of his revival and crafted a taut thriller from beginning to end, haunting us with Gyllenhaal’s gaunt and wolfish grin and the harrowing closing moments – a man’s death, captured on screen for the early bird news. It’s grim and daring and everything that “Roman J. Israel, Esq.” clearly wanted to be. What it proves is that even the most fabulous lead performance (and Denzel Washington is admittedly superb) can carry a film only so far. Decent men have always been the hardest to convey intriguingly in film, which is why so many popular series and films rely on the charms of the anti-hero; it would’ve been a surprise had Gilroy and Washington managed to accomplish it.

Instead, we’re left with a flat, tepid film that wants to be a heart-pounding thriller, a moral drama about the follies of man and a workforce that bullies them down, a character-driven meditation on one man’s pursuit of nobility and a brief lapse of judgment, together equaling almost two hours of wasted time. It’s perplexing to see just how greatly the creative team missed the mark.

Washington stars as the titular Roman, who finds his orderly and meticulous life disrupted when his partner suffers a heart attack. Despite qualms, he goes to work for the bigger firm that takes over, led by George Pierce (Colin Farrell – serviceable and given far too little to do), and from there, his life continues to unravel. Faced with having to essentially start over after decades following his own style of work, he makes a decision that has serious repercussions.

Farrell and Washington are such naturally charismatic performers that it’s a shame that they share so little, consequential screen time together. Carmen Ejogo is given even less to do in an enjoyable subplot that doesn’t fit effortlessly into the larger plot.

The cinematography by Robert Elswit is sun-scorched in daytime scenes, and suitably moody – inspired by film noir shadows and lurking figures – at night. Elswit’s work along with Gilroy’s direction in the quieter moments, and Washington’s superb work, save the film from being a total loss, but we can’t help but engage in the lingering “what ifs” that are poison to any film: What might’ve been had the film had a tighter script, a more sound vision, a creative team that gelled? We don’t know, and what we’re left with is a half-baked film that disappoints both with what is and what could have been.