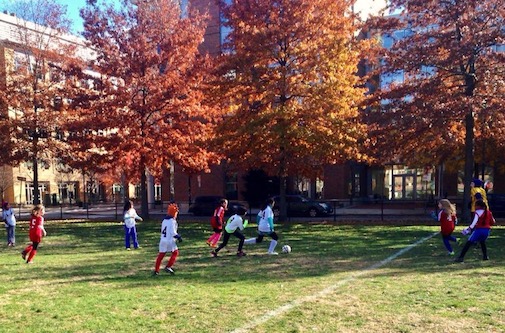 A second community group has come forward with concerns over a recent “codification” of fees for the use of school buildings, asking the School Committee for reconsideration of charges that could hit some families hard.

Alex Loud, a public schools parent and longtime coach for Cambridge Youth Baseball and Soccer teams, said he was surprised to suddenly find new custodial fees for using gyms. Reserving space for a 12-week winter soccer clinic for Cambridge kids, he found “new fees” adding up to $1,020 – fees that “now have to be borne by all the families of the kids participating,” he said.

“This only exacerbates the gap between those who can afford the program and those who cannot,” he said. “It gives our organizations less of a cushion to offer scholarships. It puts more pressure on us to raise fees, and, most likely, to opt to cut programs.” Various program fees, Loud said, can now add up to $50 to $60 dollars per family each year, not insignificant to many of the city’s families.

“Cambridge is a wealthy city,” Loud said. “We need to extend these programs equally to all members of the community” – without asking the building custodians to “share their overtime pay” as one solution.

In September, members of the North Cambridge Family Opera succeeded in getting a change to a “clarification” of an existing fee structure that they said would add 30 percent to 40 percent to their $10,000 budget through an equipment charge at the Peabody School – a charge they had never faced in several years of using the space. The committee changed the policy, led by school department Chief Financial Officer Claire Spinner through Manikka Bowman’s buildings and grounds subcommittee, to apply the equipment fees only to the new school buildings for the next year, as a trial. (This includes the nearly $100 million new King School/Putnam Avenue Upper School building, and the upcoming King Open/Cambridge Street Upper School building, currently priced at $160 million.)

Member Fred Fantini addressed Loud’s concern through a motion “that the administration review our policy and determine what is happening and recommend a course of action.” The motion passed unanimously and was sent to Bowman’s subcommittee.

At an October 2016 meeting of the subcommittee, Spinner explained that a project to implement an online system for school building rentals revealed a hodgepodge of inconsistently applied rental, equipment and custodial fees. “Understanding how the permit system worked was a bit of an undertaking, since little was documented in writing and several long-serving staff members with institutional knowledge had departed,” Spinner explained recently.

Spinner and Chief Operating Officer Jim Maloney said that, especially with the new King/Putnam Avenue Upper School building coming on line, fees needed to be predictable and better enforced to “protect our investment,” be consistently applied and ensure that the district was covering its costs of allowing others to use the buildings.

It was the newly charged custodian fees that surprised Loud – fees not evident in the table of charges but delineated in the district’s policy and procedures document. These charges for custodians who need to be in the building during off-hour activity – no matter the type of user – do not represent a change in policy, Bowman and member Patty Nolan said. “It’s not that we added anything to the policy,” Bowman said. “For whatever reason, how it was implemented and who it applied to was different” than it should have been.

“The fees charged for custodian, security and other required staffing details are separate from rental fees,” Spinner said this week, “and can apply to any category of user if the event requires this staff. These charges are just pass-through – we charge only what we have to pay the staff for their time.”

Member Emily Dexter pushed back at the meeting, echoing comments from the North Cambridge Family Opera discussion. “For any organization getting money from the city,” Dexter said, “we should not ask them to pay it back to us.”

Newly created or not, it’s likely that other longtime users are going to be surprised by fees they haven’t paid before. At the first buildings and grounds subcommittee meeting in October 2016, Nolan flagged the need “to reach out to current users to review before you make recommendations.” Now that the online structure is in place, what to do about the response of at least two community groups has been sent back for review. Fantini and Nolan join Bowman on that subcommittee.

Bowman said she was “more than happy to have the necessary conversations,” as long as charges are equitably applied.

The administration received the latest in a series of motions from member Richard Harding asking that it report on the “elimination of the ‘College Prep’ [course name] from the Cambridge Rindge and Latin high school course catalog.” Similar motions have been passed, only to disappear without action.

“With as much angst as I possibly could, I hope [the ‘college prep’ term] is changing,” he said. The last time he raised this issue, in July, Harding said, “we were assured it would be taken care of.”

“We ordered it to be done, but administration said the catalog had already been printed. I have no time for this on this issue,” he said, exasperated. “I don’t know why this isn’t changed.”

“I fully support changing the language,” Bowman agreed, “but I don’t care what we name it. I do care that our general education should be on a quality that it puts kids on a path to do whatever they want to do post-secondary.”

Student member Paul Sullivan, a senior at the high school, explained that a school-wide discussion has begun about the implications of the terms. “We can and should eliminate ‘college prep,’” said Sullivan, who is also on the school government. “Words carry a lot of weight. Though we are changing the words, we are not changing the circumstances,” he cautioned.

Superintendent Kenneth Salim said that “inclusive process” is underway with “a plan to have a change in time for the next course catalog.”

Dexter proposed amending Harding’s motion to have the high school stop using the “college prep” name in the next school year and to “consider and reflect on alternative names for ‘honors’ as well as college prep. The amended motion was passed unanimously, with Kelly and Mayor E. Denise Simmons absent.

Football, sugary drinks and thanks

Also passed were a Harding, Fantini and Simmons motion to ask the superintendent to work with the athletic director to bring back “the longtime tradition of the Thanksgiving Day football game,” with Harding saying “there was no reason” to move the date; a Fantini request to receive a report on the number of students taking advantage of an occupational and vocational education collaborative; a Dexter motion to congratulate Cambridge homeless advocate Hasson Rashid for completing a leadership Commonwealth Seminar; and a motion by Nolan and Dexter to congratulate state Sen. Sal DiDomenico and others for overturning a state ban on bilingual education for English-language learners.

Dexter calendared her own motion for a report on “the extent to which sugary drinks are made available” in school cafeterias, apparently to allow for further discussion with district foods service director Melissa Honeywood; and also a Nolan and Bowman motion to mail a school budget document to all Cambridge households, pending more research on cost and effective presentation, she said. Simmons, who arrived for the last half-hour of the meeting, calendared without discussion a Dexter motion to thank “adults who work in our schools” for their work “in response to unusually difficult local, national and global events and circumstances” of the past year – a motion Harding said earlier in the meeting he supported.

Members passed, with Kelly and Simmons absent, revisions to staff family and medical leave policy (for which union President Dan Monahan thanked the committee in public comment) and a weapons and assault policy to reflect that students in kindergarten through second grade are not eligible for suspension; contract awards of $1.6 million for out-of-district special education services, $40,000 for uAspire college financial aid counseling services, $45,000 to Enroot for a mentorship program for select English Language Learner high school students, $50,000 to Doc Wayne for a therapeutic sports program, $49,000 for computer support for a staff attendance system, $60,000 for electrical supplies, $42,000 for an out-of-district student bus contract, $30,000 for 52 string instruments at the elementary schools, and $67,000 for instructional materials for a high school-level bio-manufacturing program; a recategorization of about $400,000 to “better meet educational needs”; and grant and gift awards of in-kind donations to the Peabody School and the Visual and Performing Arts Department, $5,000 to establish a summer camp tuition for an autistic child in memory of Jim Conry, $2.6 million in federal funds toward special education; $82,000 in federal funds for summer enrichment programs for English-language learners, a $380,000 increase in federal funds to supplement an earlier grant for improving teacher quality and a $24,000 Massachusetts Cultural Council grant.