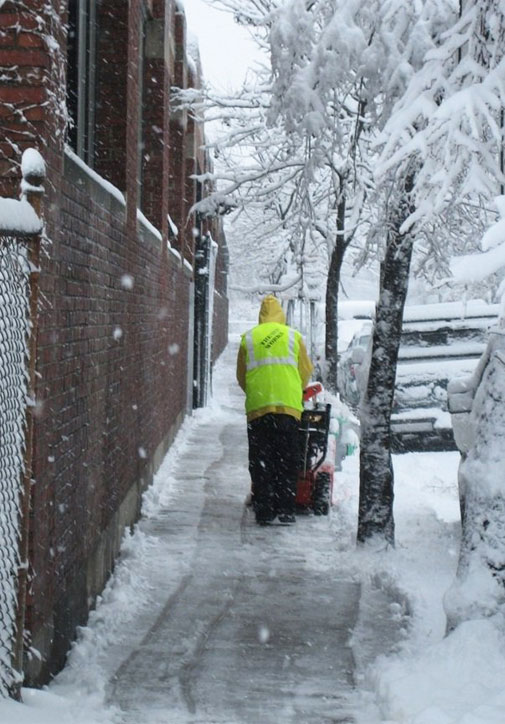 Up to 15 inches of snow are being talked about from the winter storm due to hit early Thursday, though the National Weather Service is warning people to look for a slightly more sane total snow accumulation of 8 to 11 inches. The results of the “bomb cyclone” will last at least from 7 a.m. to 7 p.m., though “snow, ice, rain, strong winds and tidal flooding” could hit Cambridge and the entire East Coast.

A “bomb cyclone” is a technical term for a winter storm that has seen “bombogenesis,” meaning storm pressure has fallen by at least 24 millibars in 24 hours. The coming winter storm has surpassed that, weather experts said.

The effects began hitting the Southern United States on Wednesday, but it was Massachusetts and the Northeast being warned that “winds gusting as high as 60 mph will cause whiteout conditions in blowing snow. Significant drifting of the snow is likely. Scattered to widespread power outages are anticipated.”

“Do not travel. If you must travel, have a winter survival kit with you,” the National Weather Service warned. Snow is expected to develop as early as 2 a.m. in some locations and continue throughout the day into the evening commute, according to the state Department of Transportation.

Power outages are expected, considering the forecast of snow and high winds, and should be reported directly to Eversource at 1 (800) 592-2000. It’s bad timing, considering the historically cold temperatures facing the region: Temperatures have seen lows below zero for several days running, and wind chills could go as low as -35 on Friday in parts of New England.

The Massachusetts Emergency Management Agency warns of potential frostbite or hypothermia from even short exposure to the wind chill, and of risks from fire, monoxide poisoning and bursting water pipes.

A coastal flood warning has been announced for 11 a.m. to 4 p.m. Thursday, and the region has been warned that the storm could even blow in ice chunks from the ocean.

Closings, and a rare open business

The city saw its own flurry of announced closings as people were expected to hunker down in their homes: Cambridge Public Schools, administrative offices, libraries, Department of Human Service Programs preschools, after-school programs, community schools and youth centers, the War Memorial Recreation Center and Community Learning Center, DHSP administrative offices, including the Multiservice Center and Fuel Assistance, and senior centers will be closed, said Lee Gianetti, the city’s director of communications. Hubway closes at 6 a.m. Thursday.

A number of business have announced their closings on Thursday, with Kendall Square Cinemas joining the crowd with a 10:29 p.m. tweet. A rare exception is UpperWest, the North Cambridge wine bar and charcuterie, which said Wednesday afternoon via email that it would be keeping its 1 Cedar St. location open as a Co-Working Cafe, where people could “bring your computer or a book and hang out with us,” with food, coffee, tea and a full bar throughout the day.

Parking, ice and snow in Cambridge

A snow emergency parking ban goes into effect at 6 a.m. Thursday, meaning vehicles parked on streets labeled with “No Parking during a Snow Emergency” signs will be ticketed and towed until the ban is lifted, he said. Free parking provided at several spots citywide opened Wednesday. They can be found listed at Cambridgema.gov/Snow.

Cars that will stay on unmarked streets should park at least 20 feet from a street corner. “Parking this far away from the corner improves visibility and safety year-round … in the winter, it also allows plows to push snow away from crosswalks,” Gianetti said in a press release.

In Cambridge, salting and plowing operations cover 125 miles of roadway and more than 23 miles of sidewalk, including sidewalks and ramps abutting schools, public buildings, high-volume bus stops, parks and other public areas, according to the city’s budget.

The state’s Highway Division will have up to 700 people doing snow and ice removal on more than 15,000 lanes miles of roadway and said there will be some 4,200 pieces of state and vendor equipment available using more than 150 depots and storage locations. This includes more than 1,300 plow and spreader combos, 2,100 plows and 460 front-end loaders.

Last winter, Cambridge got about 43 inches of snow, demanding a $2.9 million appropriation from free cash to help pay the total cost for plowing, salting and clearing public areas.

The city got only about 30 inches of snow the previous winter.

And the winter before that was the “snowpocalypse,” when about 111 inches blanketed the region – in Cambridge, it’s officially 110 inches.

But all of that came without a “bomb cyclone.”

Updated information will be available at CambridgeMA.GOV/Snow throughout the storm. The public is also encouraged to follow updates on Twitter and Facebook. The city will be using the hashtag #CambMASnow to help the public follow the conversation.