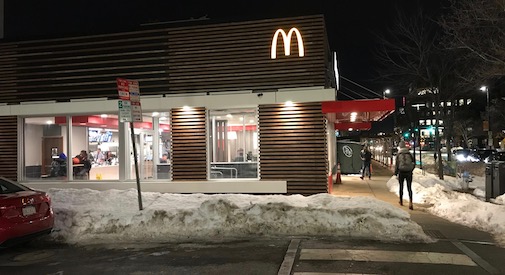 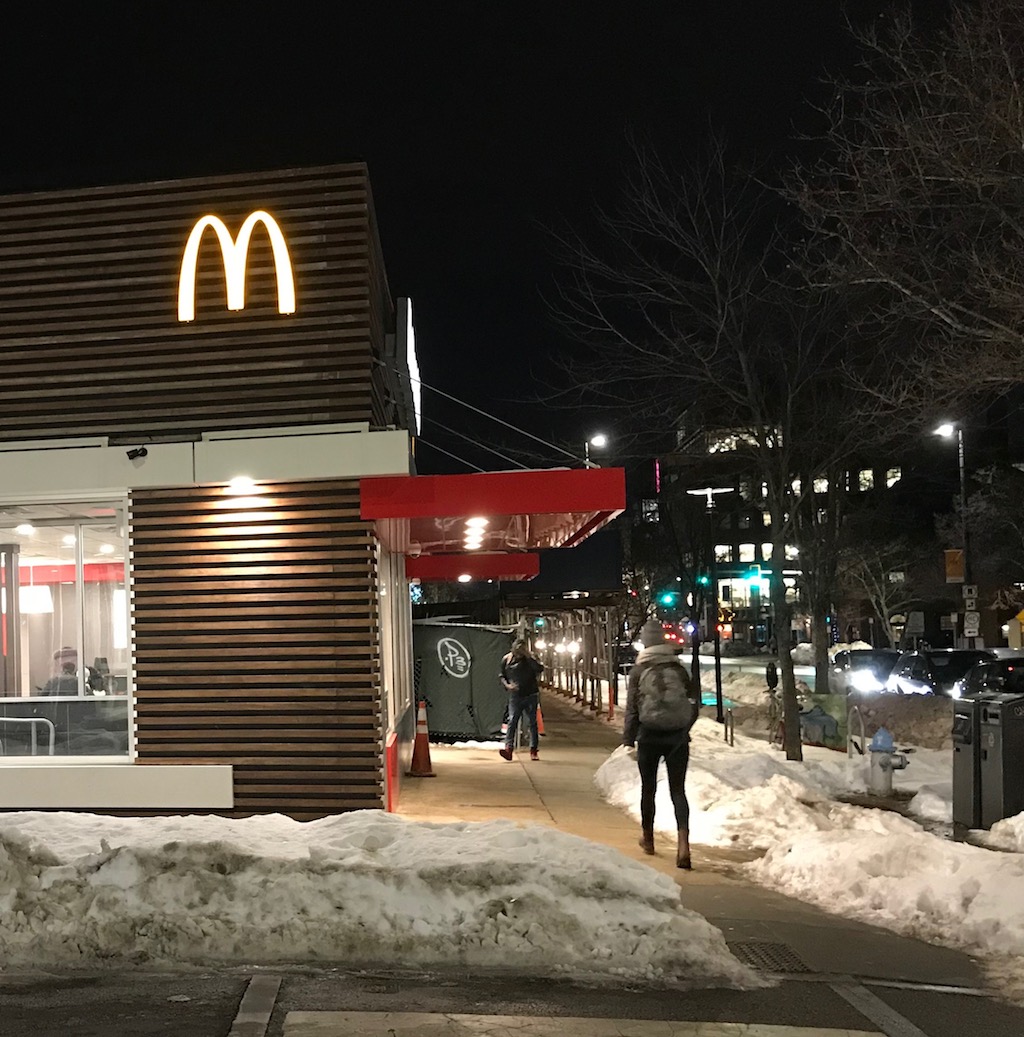 The McDonald’s in Central Square stays busy up until closing at 2 a.m., the owner says. (Photos: Marc Levy)

Late-night snackers will be happy to hear that Central Square could soon get its second 24-hour eatery: the McDonald’s at 463 Massachusetts Ave., which already has a license to stay open to 2 a.m., but closes its doors before reopening four hours later for the breakfast crowd.

“You may as well just stay open for the four hours. The business warrants staying open late,” owner Vern Chin said after a License Commission hearing Wednesday, affirming how good late closing times has been for business. 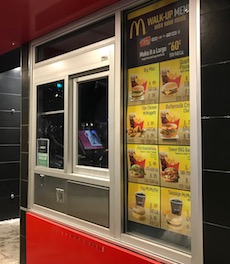 The walk-up and pickup window at the McDonald’s in Central Square.

It’s due not just to walk-in customers, but to walk-up customers, thanks to the opening of Greater Boston’s first street serving window on Dec. 18, 2013, and its ability to quickly serve crowds hungry after getting out of nightclubs such as The Middle East. Since then, the seven-person staff that Chin keeps on hand nightly has added service for Uber Eats, which lets people order online; Uber car-service drivers are summoned to the window to pick up food and deliver it. “We’ve run [the McDonald’s] like a drive-through restaurant,” Chin said.

“When we close at 2 o’clock, actually a lot of people are upset. ‘Can we get an order in?’ And I say 2 o’clock is 2 o’clock, because the cops roll in and they could give you a hard time and shut you down,” he said.

The early morning crew is sent home by Uber as well, since trains don’t run at that hour, and are “all in agreement” that they should be making that money instead of seeing it go to drivers, then taking the T at the end of a full shift at 6 or 7 a.m., Chin said.

The city and Central Square has improved dramatically since 1992, when Chin arrived, and the he said he saw more good signs in the development underway around the eatery, such as the Mass+Main project. Its 308 units – in two neighboring buildings and on Bishop Allen Drive – should be ready for move-in late in 2019.

“It’s only going to be vibrant in the square. And the city is trying to make that area the go-to neighborhood,” Chin said. “It’s a great idea.”

McDonald’s will have to seek approval from abutters to stay open all day, but Chin is confident the Sater family at The Middle East, the developers at Mass+Main and the nearby bank – which is where he banks – will support the move.

Central Square already has a 24-hour restaurant – Cambridge’s only – at CloverHFI, the 496 Massachusetts Ave. branch of the popular healthy fast-food chain.

Clover won approval from the License Commission in July 2014 with two members in favor and then-police commissioner Robert Haas abstaining. Haas feared sporadic violence seen outside Central Square nightclubs would spread or be sustained by crowds given a reason not to go home. But the rowdiest of the clubs, known as Moksa and then Monroe, closed; and Haas’ fears were never borne out.

McDonald’s also has a clean disciplinary record, before and since getting its 2 a.m. closing time, commission chairwoman Nicole Murati Ferrer said.

Chin said he was excited to expand his hours again.