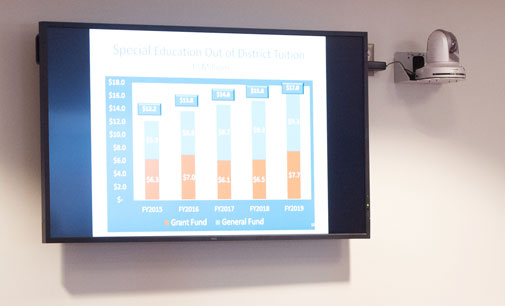 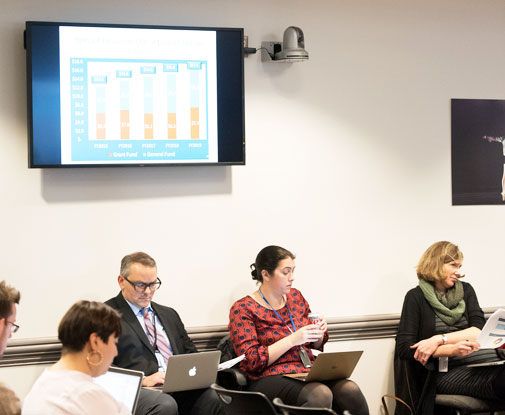 Two fast-approaching school budget roundtables will be livestreamed, cable broadcast and archived officially, after months of School Committee non-action on allowing anything but “regular meetings” to be seen unless people sit in the actual room where they happen. The change came since the new committee was inaugurated in January.

Marc McGovern replaced E. Denise Simmons as mayor – and therefore as leader of the committee – and newly elected Laurance Kimbrough took a seat as veteran member Richard Harding lost a bid for election to the City Council.

With Harding and Simmons arguing regularly that cameras hindered “honest” and “open” dialogue, earlier motions to televise roundtables had difficulty getting traction. Fred Fantini, who last term was chairman of the governance subcommittee charged with coming up with a recommendation, notably did not put forth one while Simmons was mayor. On the second meeting under McGovern, who supported opening up once-private meetings as the City Council made its own rules changes, Fantini and member Emily Dexter made the motion that kicked off the recent successful round of rule changes.

The committee adopted the rule unanimously. 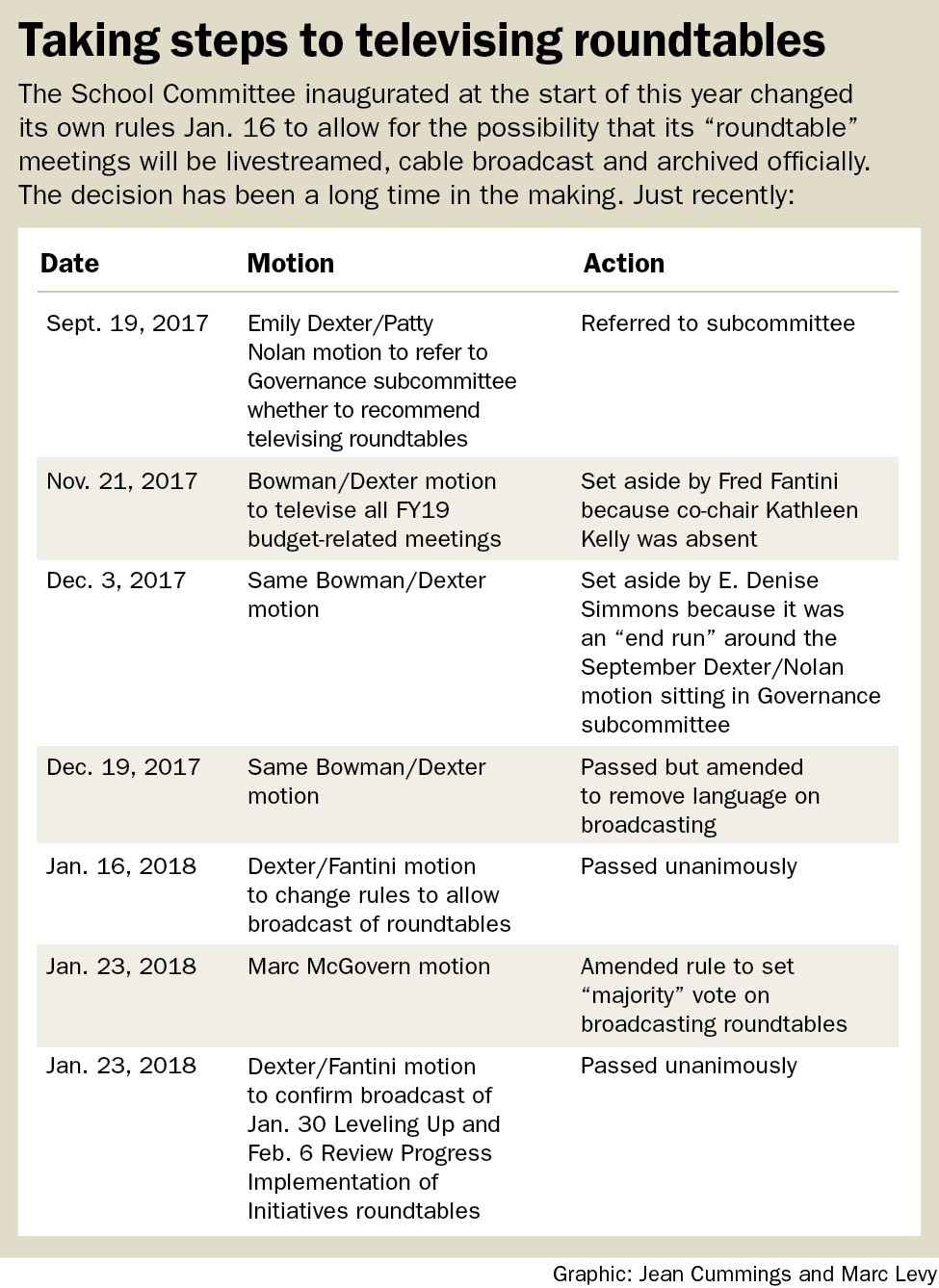 What’s in a “roundtable”

The committee’s rules – written by the committee itself – identify several different kinds of meetings, such as “regular,” workshops, retreats, special meetings and roundtables. Roundtables are generally more relaxed than regular meetings, where each speaker needs to be addressed by the mayor under Robert’s Rules of Order. Without required microphones and camera-visible seating, they can allow more give-and-take between committee members and district administration staff, and usually allow a deeper discussion of data and issues.

By definition, then, roundtables are often the most interesting and valuable exploration of the most important issues in the district. Roundtable topics from last year – all untelevised – included updates from special education services, high school staffing and world language in the elementary schools.

But until the Jan. 16 vote, committee rules prohibited televising roundtables, retreats and subcommittee meetings (unless they are the “subcommittee of the whole,” such as annual budget subcommittee meetings). This week’s votes at a special meeting specifically set broadcast of the upcoming Tuesday roundtable on the first year of the Leveling Up initiative ending academic “tracking” of ninth-graders in English classes, and the Feb. 6 roundtable reviewing progress of recent program initiatives. Since accurate meeting announcements must be posted at least 48 hours before the event, the rule change came too late for this week’s roundtable on the elementary schools program review to be taped.

In Superintendent Kenneth Salim’s first year, committee roundtables underwent significant changes. First, the quality of presentation and discussion rose considerably from those under previous superintendent Jeff Young. As repeatedly praised by each subcommittee member, roundtable presentations quickly became shorter, more focused and easier to digest, yet also showed pros and cons of roundtable subjects and allowed for more questions and give-and-take between committee members and district staff. A December 2016 roundtable on high school staffing, for example, had guidance counselors and department heads speaking frankly about their challenges and needs; those conversations may have been responsible for the inclusion in that year’s budget for more high school science teachers and guidance staff.

At the same time, these in-depth discussions on programs and initiatives were newly scheduled as roundtables, disallowing broadcasting and archiving. Before Salim, such budget-related presentations were often part of budget subcommittee meetings – which by committee rules must be videotaped and streamed. In the 2014-15 school year, there were six roundtables; in 2016-17, there were nine, with a tenth rescheduled to October.

At the time, Fantini and budget subcommittee co-chair Kathleen Kelly said the choice to decrease the number of televised budget-related gatherings was in deference to the superintendent, then newly arrived. It allowed him to “feel more comfortable” as he started the job, Fantini said.

With the new rules allowing the broadcast of roundtables, the committee will still need to vote on each upcoming roundtable as they come up. The votes need a simple majority in favor to pass.