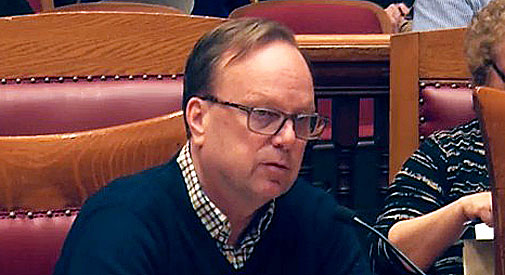 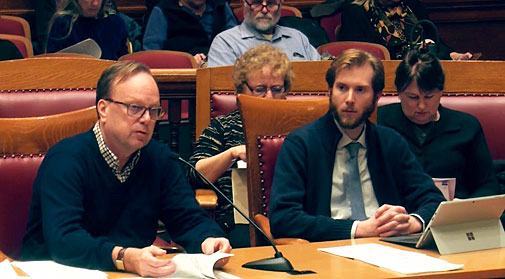 The Harvard Square zoning petition submitted in September by Peter B. Kroon, intended to promote retail vitality and enhance the square, died in committee Wednesday night when the City Council’s Ordinance Committee adjourned its marathon 4.5-hour hearing with no recommendation and after making it less than halfway through the petition.

Technically the zoning petition expires Feb. 20, but the full City Council would need to pass it to a second reading Jan. 29; publish it in the newspaper; wait two weeks; and vote to ordain it Feb. 12, because Monday, Feb. 19, is a holiday (Washington’s birthday). Given the lack of action Wednesday and the number of open issues, there is no realistic possibility of the required vote on Monday.

The Kroon petition is lengthy and has eight disparate goals: protecting the square’s retail ecosystem; improving the engagement of the Harvard Square Advisory Committee; tightening rules for a fund that collects payments in lieu of construction of parking; requiring smaller retail spaces; limiting bank frontage; restrictions on the appearance of chain stores; incentivizing basement development; and limiting height or requiring something in exchange, such as residential development. 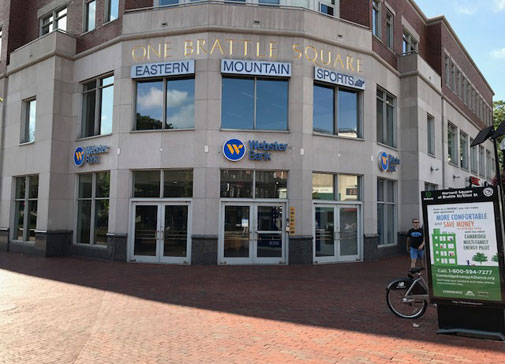 Kroon’s proposal sought to address issues such as bank “dead zones” that could be livelier as retail or restaurants, with bank frontage minimized for passers-by. (Photo: Peter B. Kroon)

In addition to timing, Kroon’s petition was beset with procedural difficulties, many of his own making. Kroon is a Linnaean Street resident and entrepreneur who had successfully spearheaded a 2016 zoning change to incentivize retail uses along the Massachusetts Avenue corridor between Harvard and Porter squares. He worked with the Harvard Square Neighborhood Association and others to address concerns in Harvard Square.

Kroon (pronounced CRONE) filed his petition in September (first on Sept. 21, missing the filing deadline by 63 minutes, and then again Sept. 28 to resolve a dispute about whether all resident signatories supported the entire wording). But then, on the eve of the Nov. 14 Planning Board hearing, after learning the Harvard Square Business Association and a dozen local businesses had written in opposition, “our group has decided to withdraw the current petition altogether and resubmit a revised petition,” Kroon wrote in an email.

But he didn’t withdraw. On advice from Planning Board member Hugh Russell, Kroon gave his presentation to the board that night anyway. Most in opposition did not attend, believing the petition withdrawn. Concerned about a fair hearing, the board gave feedback but advised Kroon to present again to avoid confusion about the withdrawal.

When the Planning Board took it up again Jan. 2, Kroon presented a slightly different version. The board based its report on it, and recommended adoption of goal-oriented aspects and further study of others, including all provisions recommending dimensional or numerical changes. But that new version caused problems Wednesday with the council’s Ordinance Committee.

“Is this properly before us?” councillor Tim Toomey asked. “Is it okay for someone to amend it without the approval of other petitioners?”

Dennis Carlone, chairing the meeting, proposed a motion to substitute Kroon’s revised text (used Jan. 2) as a basis for the council’s discussion, hoping to avoid references to the revised version used by the Planning Board. A 40-minute discussion and debate between councillors, the city solicitor and planning staff ensued, questioning whether Carlone’s motion would fix any problems. “We were told the solicitor felt it was fine, as long as we vote on this motion,” Carlone said.

“I cannot guarantee that it’s, quote, ‘fine,’” said Nancy Glowa, the city solicitor. “There is a procedural deficiency. The question is how significant it is, and whether it can be cured.”

To further complicate, the council had in front of them the Sept. 28 petition; a redline of changes recommended by the Planning Board from December; a new redline with the December board changes in one color and the January recommended in another; as well as numerous other documents. The new redline was made available only at the start of the meeting, and was not online. It was added to the table quietly after many picked up the handouts, confusing many in the audience. “We only had them done in time for the meeting,” said Iram Farooq, the city’s head planner.

To address concerns that it should not be considering the multicolored redline, the committee took that document and began to read and vote each change separately. It was not clear how that procedure would cure any procedural difficulty, but it slowed the meeting to a crawl.

“This is on cable television – lawyers going to have a field day,” Toomey said. He proceeded to vote either no or “present” on all votes.

“This is a un-fucking-believable,” said one member of the public. “This is insane,” affirmed others.

Although multiple councillors suggested taking public comment before detailed discussions, Carlone said he was determined that the committee should make clear which text should be commented on … and that meant a laborious reading and discussion of each change.

The council approved several minor goal-oriented changes before discussing proposed changes to the membership of the Harvard Square Advisory Committee that reviews zoning changes and permitting in the square.

The council spent nearly an hour on those, of which term limits was most controversial. Because terms are three years, the petition proposed a limit of two terms – six years – with a required one-year gap before potential reappointment.

Councillor Quinton Zondervan suggested four three-year terms with no gaps, amounting to 12 years. Craig Kelley wanted to keep the gaps and proposed an amendment to Zondervan’s amendment. Kelley’s amendment failed, and the council deadlocked 4-4 on Zondervan’s. (Councillor E. Denise Simmons did not attend the meeting.) A proposal from Jan Devereux for three three-year terms without gaps (nine years) finally won the day.

In keeping with the spirit of the meeting, the councillors debated whether “five members representing each” of the adjacent neighborhoods worked out to 25 members or five members.

One of Kroon’s goals was to ensure turnover in the position of the committee chair, which was been held for many years by John DiGiovanni, president of the Harvard Square Business Association. Kroon’s language required the chair to turn over each year, with potential reelection after a one-year gap.

Mayor Marc McGovern said he thought the choice should be up to the committee. “We’re entrusting these people to make a lot of important decisions. We can’t even trust them to elect their chair?” McGovern’s proposal passed 7-1, with Toomey opposed.

At this point, more than two hours into the meeting, Kelley proposed a motion to take public comment, and the committee did so for an hour, ending just after 8:45 pm.

Retailers and residents spoke to the petition, with agreement on its goals but disagreement as to whether it would achieve them. Most comments were at a high level, rather than with specific language.

The council then turned to a provision requiring residential units in any newly constructed space in buildings above 60 feet. Although Kroon had proposed such language originally, it had been withdrawn at the request of the Planning Board. Nevertheless, the council discussed it for an hour.

Kelley expressed uncertainty at the committee’s effectiveness, given the clock: “Do we go ahead with anything? I honestly think at this point we will not come to anything useful.”

Carlone replied that he intended to keep going “until everybody walks out” with a quick followup: “Please don’t walk out!”

Some were concerned that removing the height provision might prevent introduction of similar language in the future, because Massachusetts zoning has a prohibition on repetitive petitions within a two-year period for an ordinance “which has been unfavorably acted upon by a city council.” There was substantial uncertainty on the meaning of “unfavorable.”

“The question maybe is being asked … would that potentially be considered negative action? I don’t necessarily think it would be,” said Jeff Roberts, the city’s zoning planner.

“Mr. Roberts has properly identified the question,” Glowa said. “I do not agree with his legal analysis or recommendation, and I don’t feel comfortable answering that question right now because that is a difficult question from a legal point of view.”

After further discussion, and shortly after 10 p.m., the committee concluded it was too tired to make meaningful progress and adjourned without a recommendation on the petition.

Kroon said he was comfortable with working to reach out to concerned business interests, revising the petition further and refiling it. His prior zoning petition took two rounds of submission to be enacted, so he has been down this road before.

Although the hearing lasted four hours and 35 minutes, City Council Rule 32B requires “public hearings shall not be more than two hours at any one sitting.” The meeting was one continuous sitting with no breaks.