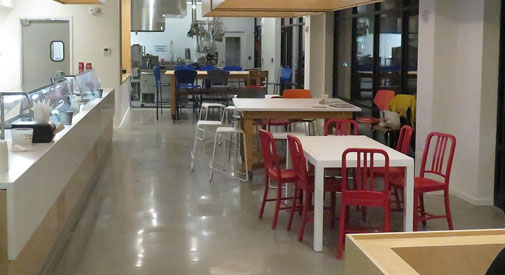 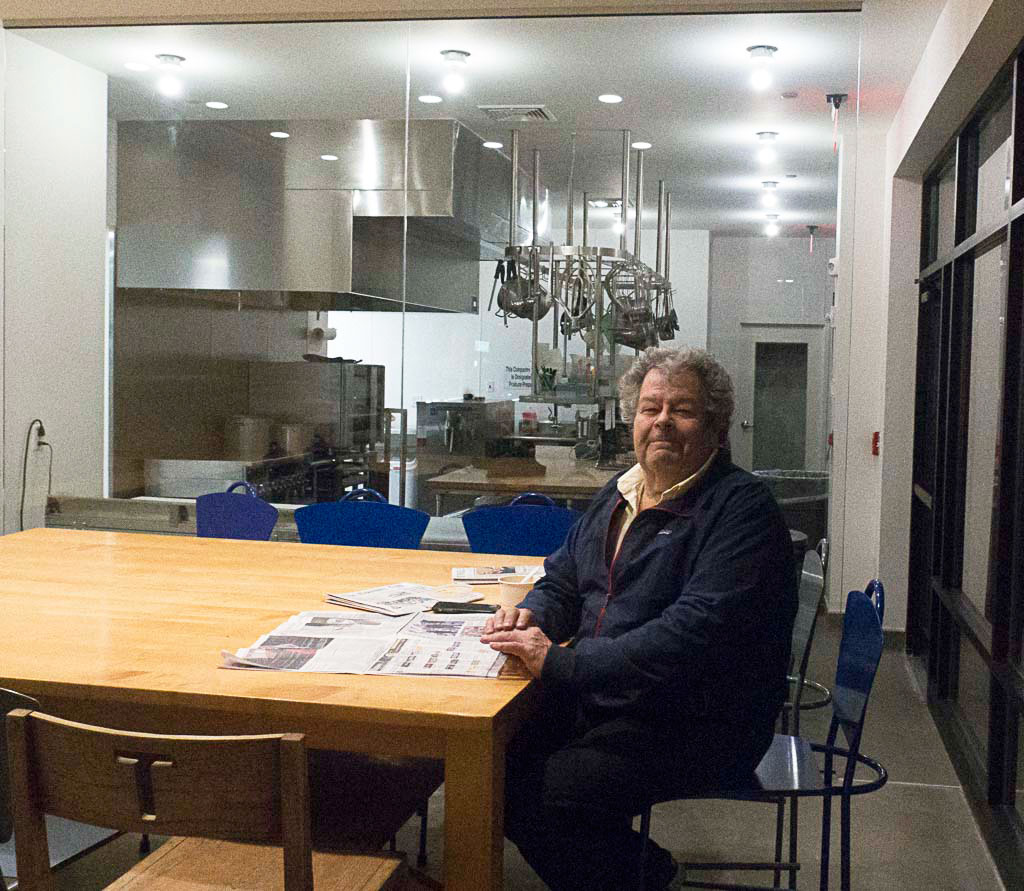 Gus Rancatore sits at the “Big Table” in the Toscanini’s Ice Cream in East Cambridge; behind him is the store’s kitchen. (Photo: John Hawkinson)

Cambridge favorite Toscanini’s Ice Cream has expanded from Central Square to a location at 159 First St., by the Cambridgeside mall in East Cambridge, with owners Gus and Mimi Rancatore opening it today just after 5 p.m. The old store at 899 Main St. closed Tuesday while the building above is transformed into a boutique hotel, leaving a one-day gap in ice cream continuity. 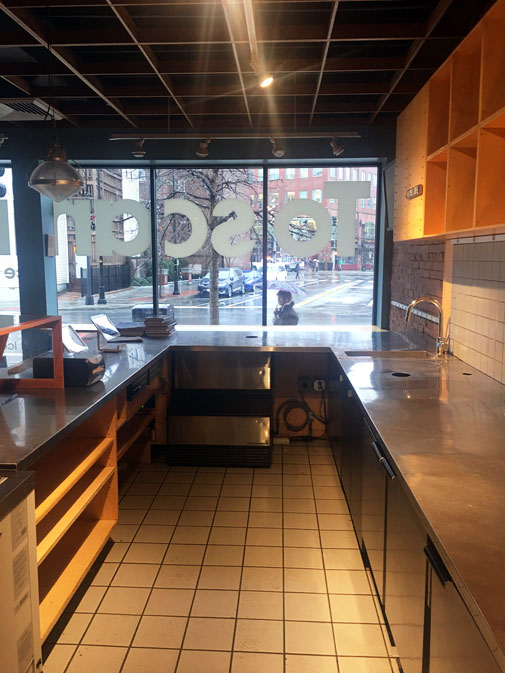 As of Tuesday, the Main Street store is empty. (Photo: Gus Rancatore)

Gus Rancatore had been characteristically vague about the stores’ scheduling, hinting in early January that the new store would open soon. “We didn’t know until yesterday,” he said today. “After many misadventures we are open,” he wrote in an email at 5:30 p.m. Thursday.

The move was first announced on Twitter with an oblique papered-over storefront photo just after Christmas.

The famed “Big Table,” designed by Adam Simha, moved to the new store Jan. 9. It no longer dominates the space –it’s off to the right side of the store and is instead one of five major seating areas, and offers a view into ice cream kitchen.

“Since 1981 we have been making ice cream here in Central Square,” Gus Rancatore said two weeks ago. “Next week we will move our production to a bigger new space at the corner of Rogers and First Street. The new store will also sell ice cream and will be the only place to get Toscanini’s when this store is renovated to meet handicapped-access requirements.” 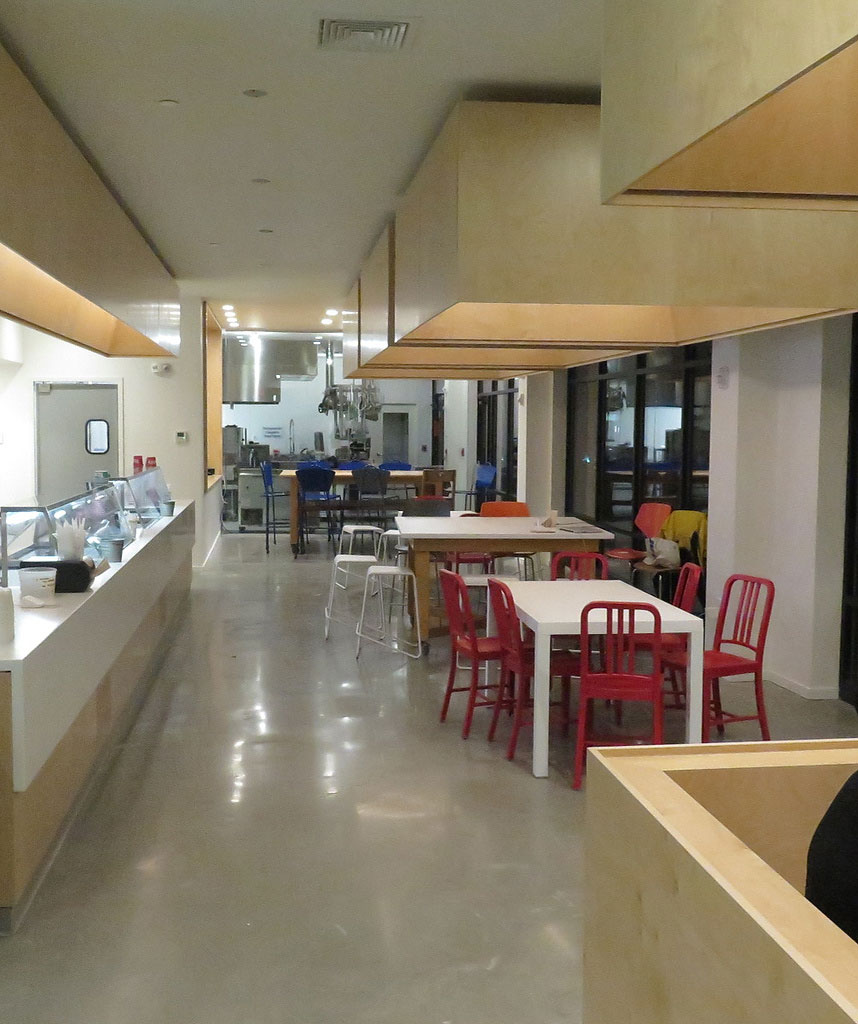 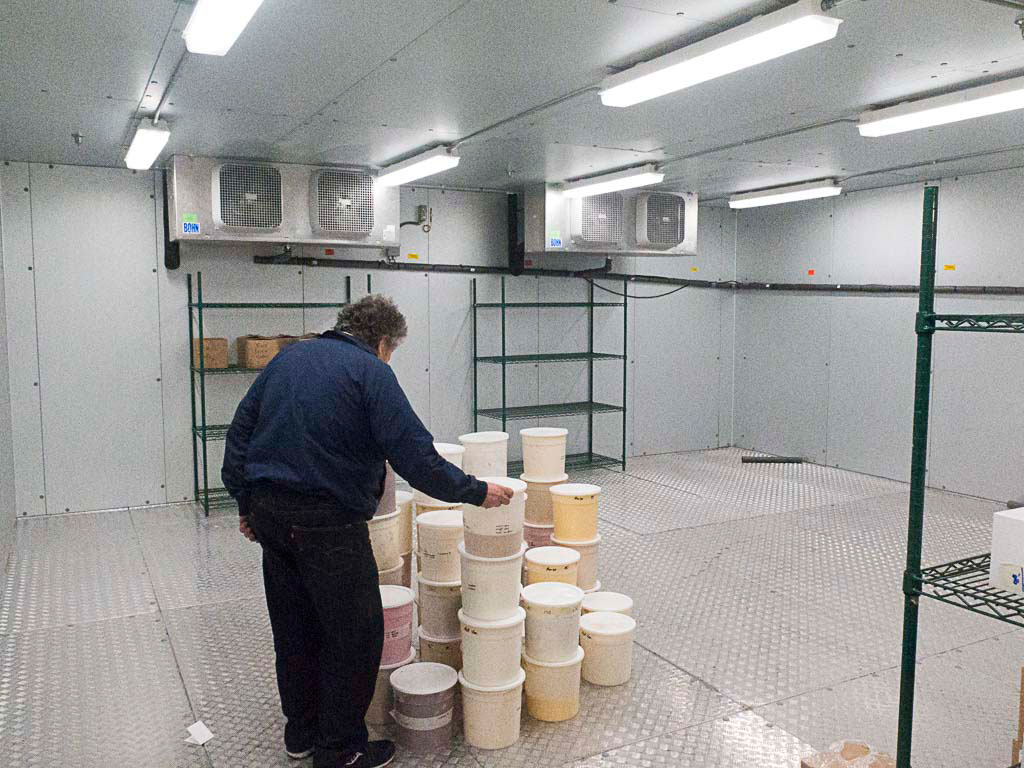 … and a humongous walk-in freezer with plenty of space for more ice cream. (Photos: John Hawkinson)

The new store is a massive 3,500 square feet, and the retail area is double the size of the old store. At the moment only half of the retail freezers are running, so there are only about 16 flavors. Coffee products will come in a few days.

It’s not the first time Tosci’s has expanded. Although 899 Main St. has always been the primary store, in the 1990s there was a store on the first floor of the MIT student center at 84 Massachusetts Ave., and a Harvard Square outpost on the 1300 block of Massachusetts Avenue in the early 2000s.

The Main Street store will be closed through July, said Patrick Barrett, owner of the building and budding hotelier. The hotel project is doing structural work that’s not conducive to retail operations. When Toscanini’s reopens there, it will have an ADA-accessible ramp instead of steps up from the street, and the kitchen facilities one door down will be given over to the hotel.

The store format has also gone digital. Instead of a modular board with wood-and-slate flavor inserts, customizable with chalk, now there are seven huge monitors. But of course, “we can’t update it … yet,” the scoopers on duty said.

The new Toscanini’s store and production facility on First Street, wrapping around to Rogers Street.