Council backs tenant ‘right of refusal’ bill, so long as Cambridge gets to alter it to fit 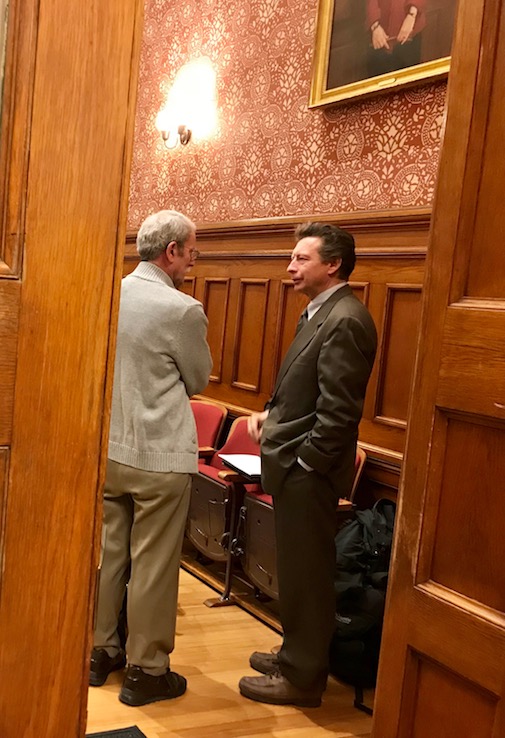 Council backs tenant ‘right of refusal’ bill, so long as Cambridge gets to alter it to fit

Jonathan Seward, president of the Massachusetts Association of Housing Cooperatives, was among around 20 speakers coming to support or oppose a tenant “right of first refusal” bill. (Photo: Marc Levy)

A “right of first refusal” bill to give tenants first shot at buying their unit when a building’s owner sells won City Council support 7-2 on Monday, but even councillors voting in favor want a guaranteed right to change its specifics to fit the needs of Cambridge.

They wanted to look at making the rules kick in only for larger buildings, instead of any building of three or more units that isn’t owner-occupied, and maybe only for much larger landlords; ensure there are exemptions for fast home sales in an emergency or below-market sales to immediate family members; and maybe allow for faster sales than the 165 days outlined, starting with 45 days for a deposit.

“I’m in favor of anything that keeps units affordable and prevents displacement,” councillor Alanna Mallon said. “I am going to be in support … but I look forward to making sure we’re going to do this right.”

The bill – supported by the city’s entire legislative delegation and with state Rep. Denise Provost as lead sponsor – was presented by some councillors as “enabling legislation” that, if passed on Beacon Hill, would let Cambridge change those specifics to fit. But councillor Craig Kelley, seconded by Mayor Marc McGovern, had doubts.

“I’m looking at the bill. Can you point me to where it says that we can do that?” asked McGovern, who supported the bill but was wary. “It’s not completely clear to me that we can.”

The reassurances were soft. The bill starts by saying it applies to “any city or town which votes to adopt the provisions,” and councillor Dennis Carlone said he’d received further assurances during State House testimony that it could be changed upon adoption. He and co-sponsors vice mayor Jan Devereux and councillors Sumbul Siddiqui and Quinton Zondervan also stressed that there were many steps to go before the bill might become a law, and that they believed Provost, state Sen. Pat Jehlen and state Reps. Mike Connolly, Marjorie Decker and Dave Rogers would be open to hearing and communicating Cambridge’s concerns.

The council order itself doesn’t support the state bill as written, Devereux pointed out. It offers support only “with an amendment for cities to provide final implementation modifications as needed [and] requesting the state delegation propose said amendments.”

“We’re saying we want our state delegation to give us the ability to tailor it to our own needs, and that seems reasonable given that cities and towns do have different circumstances in their housing markets,” Devereux said.

Going into detail about desired changes “would in a sense be us drafting our own version, and we’re not at that point,” she said – although that’s exactly what Kelley wanted to do, and McGovern as well if there weren’t a deadline: The bill must be reported out of the Legislature’s Joint Committee on Housing on Wednesday.

The issue drew comment from nearly 20 members of the public, with most speaking in favor. The most impassioned comment came from opponents of the bill, although not every opponent seemed fully informed on the details. More than one opponent described their fears of the bill’s effects despite owning two-unit or owner-occupied buildings that wouldn’t be affected, or described bad effects from a similar law long in use in Washington, D.C., although the particulars of the law are different.

Some opponents argued that the city’s tax base would take a hit, leaving Cambridge less able to pay for its operation and capital projects. Others said simply that they had made an investment in Cambridge property and, especially because they might rely on the sale of their house to pay for retirement, deserved to get all the money from it the market could bear – not just what the bill proposed as fair market value based on one or more professional appraisals.

“Appraisals don’t do it, because the market is running so fast. An appraisal based on market sales in the past six months might give you something at a value of $600,000 that tomorrow would sell for $800,000,” said North Cambridge resident Bill Donaldson.

… but an “unfair market”

Abra Berkowitz, resident of The Port neighborhood, supported the bill based on losing “friend after friend” who left the city after being unable to buy a home – including dual-income doctors and lawyers with no children “unable to compete in the real estate market [who] could actually pay for a $1 million house if they just had the opportunity to present their offer first. That’s really important to consider. We’re not talking about preventing people from making a really great, solid profit.”

Devereux agreed that in Cambridge, “you don’t have a fair market, you have an unfair market,” in which properties “go up 10 percent a year and you see every property selling for over asking price with multiple offers.”

In the end, council opposition to seeing the state bill advance was limited to Kelley and Tim Toomey, who said it held too many flaws and uncertainties and was “a smokescreen to avoid the real issue of how we’re providing affordable housing.”