‘Red Sparrow’: The war is colder than ever for alluring naked spy forced into killer role 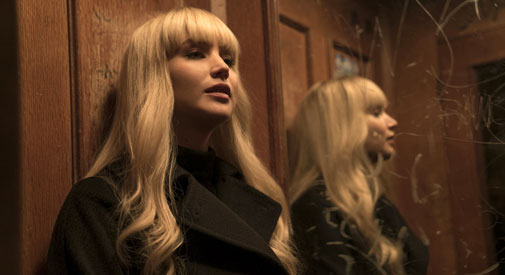 ‘Red Sparrow’: The war is colder than ever for alluring naked spy forced into killer role

Plots within bloody plots fill this thinking person’s spy thriller that’s two parts “Atomic Blonde” and three-fifths “Tinker Tailor Soldier Spy.” Forget all the flap about the dress – Jennifer Lawrence is a big screen star. If there was any question (as after 2016’s sci-fi miscue, “Passengers”), “Red Sparrow” should squelch doubts. We all knew the outspoken actress could bring mettle and grit from the “The Hunger Games” series, but here, in this chilly bit of Cold War espionage rewarmed – and aptly so, given the Mueller probe – she takes it up a notch. Much must be delivered to the screen: ballet dancing, full frontal nudity (close enough) and a Russian accent, and Lawrence does it all convincingly so, at least for the most part. Not that she or the film are going to make off with an Oscar, but they may knock “Black Panther” from its box office roost, though the R rating makes that an extra tough go. 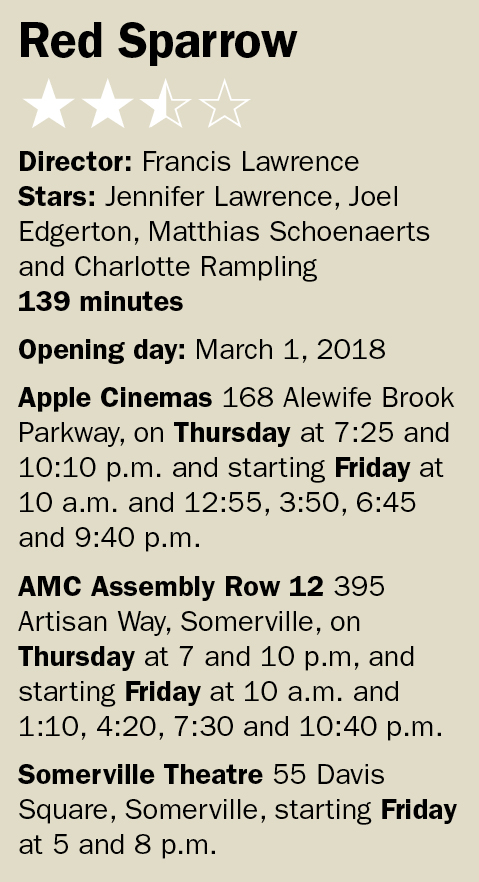 Steamy and ever shifting, “Red Sparrow” takes us back behind the curtain, ostensibly of Putin’s Russia, where the commoners live hand-to-mouth and at the mercy of the state. It’s there that Lawrence’s Dominika lives a cut above as the lead dancer of the elite Bolshoi Ballet, but just as we drink her in, up on the stage beguiling a packed house, a freak accident ends her career and she’s suddenly on the cusp of being evicted from her cozy pad and there’s no money to care for mum (Joely Richardson) who’s suffering some kind of illness. No worries, uncle Vanya (Matthias Schoenaerts), an intelligence officer, steps in and gives Dominika a “one-off” job that will solve her problems. All she’s got to do is lure an admiring fan and enemy of the state into a sting. The grand hotel where it all goes down, draped in red and gold, is regal and inviting; the mark, not so much. Needless to say, things veer off script, but in the end, Dominika gets it done. From there she’s in too deep – an intelligence liability, so to speak – so it’s either back to school or into the harbor.

The “sparrow” school, where the objects of the film’s title are cranked out, is something of a coed finishing school where all the enrolled are comely young pots of desire; but the finishing in this oft-tagged “whore school” is that if you flunk a test, you’re taken out back and shot. Students are trained to detach themselves from their bodies so that on assignment they can bring pleasure to obese, hairy men – death might be a better option. To prove the point, a Gollum of a sex offender gets waltzed in on one unlucky student who’s instructed to give him what he desires. The concept is simple: Give a mark what he or she wants and you can control them. Mercifully all these sex charades at the fore of the classroom – Dominika bare and unabashed in her exam – are orchestrated by a very solemn and deliciously cold Charlotte Rampling as the “sparrow” instructor, who keeps the “Fifty Shades of Grey”-esque scenes from diverting into laughable spectacle.

Ultimately Dominika gets handed an assignment to track down a mole and try to turn an American agent (Joel Edgerton). Things get complicated and bloody – there are scenes of torture that’ll make most gawk through their fingers – and Jeremy Irons drops in as an intelligence higher-up, not even attempting a Russian accent, but avuncular and cobra mesmerizing enough to get a pass. Mary-Louise Parker also practically walks off with the film as a booze-addled assistant to a U.S. senator who can be bought for a fifth of good vodka and a satchel full of cash.

For much of its long (139 minutes) running time “Red Sparrow” resisters as engrossing twists of intrigue punctuated by lurid sex and violence. Based on the novel by Jason Matthews, the allegiance shell game gets too convoluted for its own good as Dominika gets caught up in a pickle play between the KGB and CIA and director Francis Lawrence, who teamed with his star for the final “Hunger Game” chapters, slack with the reins and lets moments linger too long, hanging incessantly on Dominika’s face. The young actress loses her hook, appearing blank and lost, the bravado washed from her creamy countenance.

Weirdly too, it’s hard to know when exactly “Red Sparrow” goes down: There are laptops that seem a bit too clunky to be current, and the passing of information on discs is a total eyebrow riser, yet the cars look to be the latest makes and there’s smartphones to be had. Not that it’s a huge detriment, but it’ll likely make most take pause.

Also, given the #MeToo moment and all the violence directed at women (let alone the misogynistic objectification – but hey, it’s over there, by the same miscreants who hacked our election) – some might take exception. Like “Atomic Blonde,” though, these women can take care of themselves; most of the creeps get what’s coming to them. “Sparrow” is not as fun, kitschy or stylized as “Blonde”; it’s something more provocative, tawdry and complicated. Things get lost in the fold, but a game Lawrence and her iron supporting cast hold the wall.