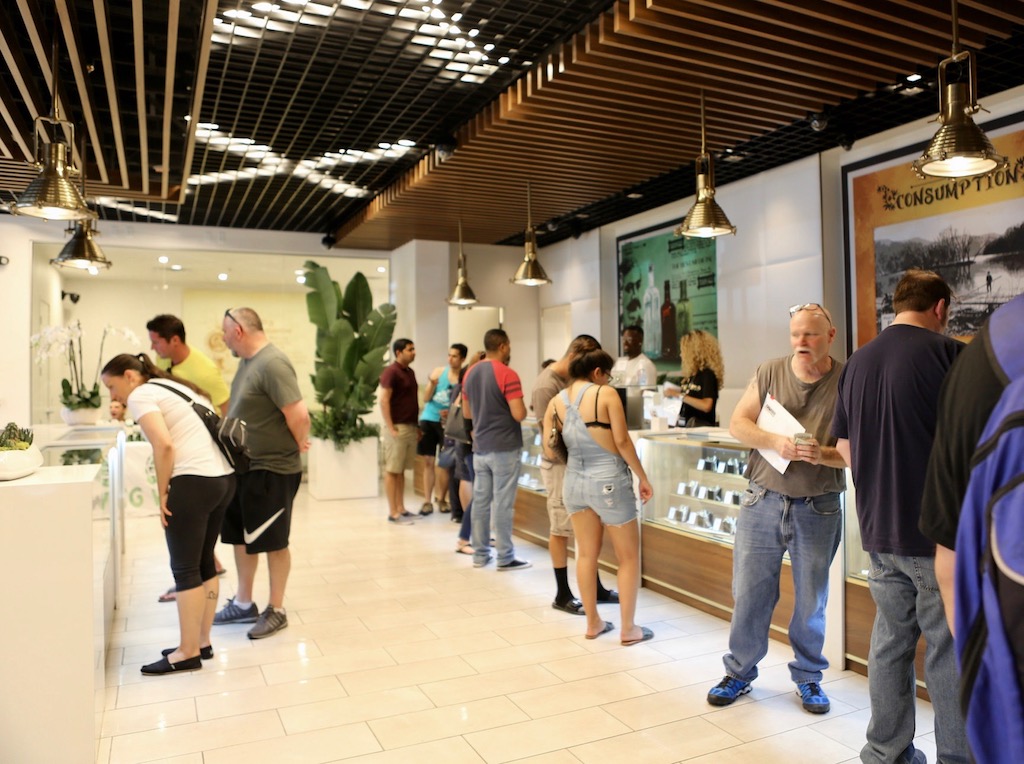 Legal recreational marijuana sales begin in Nevada on July 1, including at Piso’s Dispensary in Las Vegas. In Cambridge, such sales could be as little as three and a half months away. (Photo: Beverly Yuen Thompson via Flickr)

A special meeting being rushed to take place within the next couple of weeks will help Cambridge get ready for sales of recreational marijuana, which could start as soon as July 1.

City councillors had a chance to approve an order Monday that would let applications come in April 1, so long as the “Host Community Agreement” signed by the city manager included the maximum 3 percent taxation from the shops allowed by state and rules that were “substantially similar to or the same as those under which current medical cannabis establishments operate in the city.”

But the number of councillors’ questions and varying interpretations of state law made it clear that before definitive steps were taken, it was necessary to pull together a meeting for guidance from the city solicitor.

As of Monday night, it wasn’t clear when the meeting would be, but the short timeline suggested it would have to be held during the day, Mayor Marc McGovern said. But a time and date hadn’t been identified – or even the kind of meeting or the body that would be identified officially as bringing the meeting together.

Update on March 26, 2018: The special meeting of the City Council was set for 3 p.m. April 5 in Sullivan Chamber at City Hall, 795 Massachusetts Ave., Central Square.

Fortunately, of the businesses able to move most quickly toward selling recreational marijuana in Cambridge – the city’s two active medical marijuana dispensaries – neither had yet held their own public meetings, which are required before applying to expand into selling “adult use” pot, McGovern said.

And only a medical marijuana dispensary operating last April could actually move forward without a Host Community Agreement in place, councillor Craig Kelley noted, which limited the possibilities in Cambridge ever further: Only the Sira Naturals store at 1001 Massachusetts Ave., in Mid-Cambridge, was selling at the time. It opened March 30. (Healthy Pharms, which opened Dec. 30 at 98 Winthrop St., Harvard Square, would be the next dispensary considered.)

Sira had its own question to consider in how it would open its highly regulated, high-security prescription-driven sales floor to recreational pot buyers, considering a current clientele of people with serious illnesses and chronic pain. Some customers have told McGovern they are comfortable in the quiet, hospital-like setting of dispensaries and “not sure I want to go into a place that’s more like a pot shop,” he said.

Kelley also wanted to add issues of use to the questions about sales, because “selling is a secondary challenge to smoking,” not to mention the possibility of the city hosting cafes where cannabis products would be enjoyed. Other councillors reminded him that neither social consumption or home delivery were being taken up by the state until next year.

“These are important conversations to have, but I do want to be very cognizant that we have two operators that are willing and able to start this process very quickly, so I want to be mindful that we are not getting bogged down in details we don’t need to right now,” councillor Alanna Mallon said.