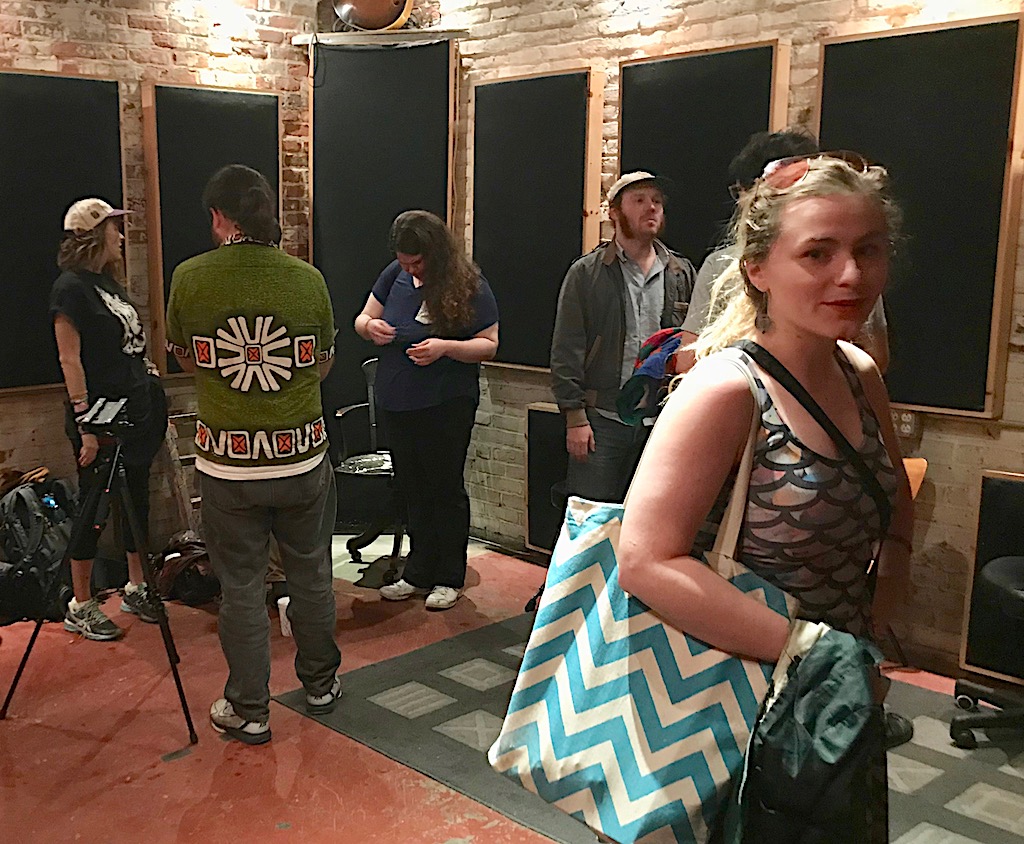 EMF tenants wrap up a meeting Saturday in a recording studio at the Brookline Street arts building near Central Square. Melissa Lee Nilles, a member of a tenants’ leadership group, is at right. (Photos: Marc Levy)

Answers about the fate of the EMF Building and the hundreds of musicians and artists who work inside have been further delayed, with a report by city inspectors listing problems with the building but not whether fixes can be done at a cost considered acceptable by the city.

Based on what they’ve seen, building tenants doubt the city will step in as a savior, and they have started to explore other options.

“We’re worried that it’s pretty unlikely the city would approve something, based on the fire report,” said Melissa Lee Nilles, a member of the EMF tenants’ leadership group. She described tenants’ mood as “neutral leaning toward pessimistic.”

The report from city fire and inspectional services departments arrived Friday, and Mayor Marc McGovern said he discussed it with EMF building tenants that afternoon. The tenants met at the building Saturday to discuss the situation. 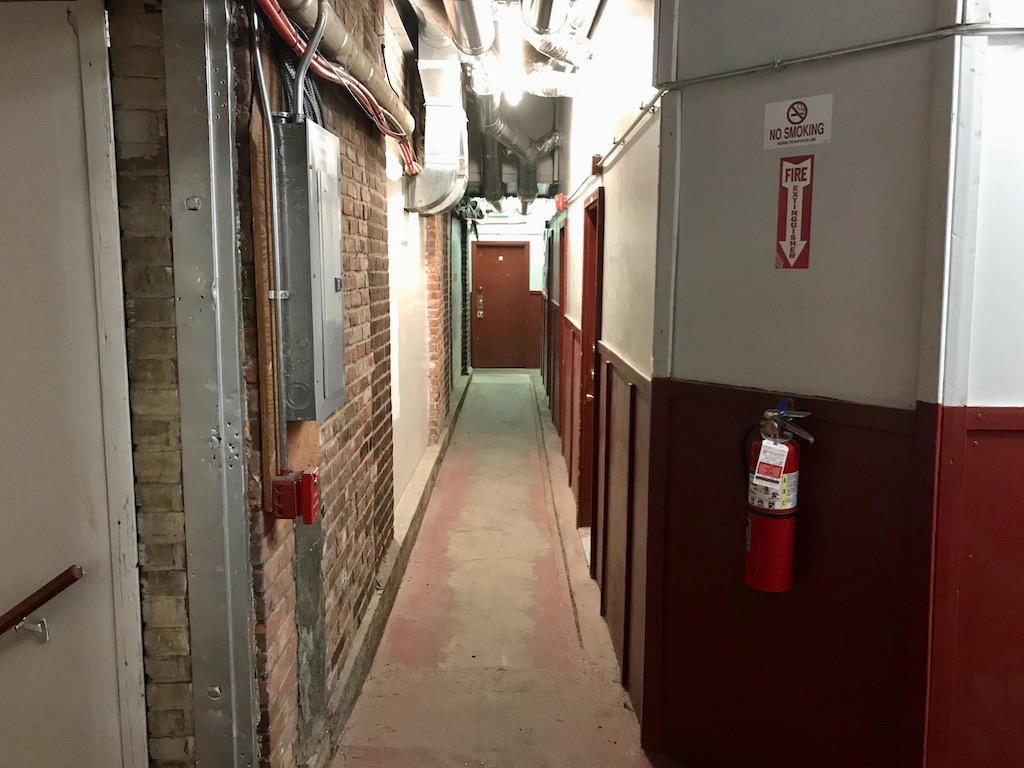 The EMF Building has an industrial feel that safety officials said suffered from a confusing layout and other flaws.

Barring the city stepping in take a long-term lease on the 120 Brookline St. building near Central Square, where hundreds of local creators rent rehearsal spaces and record works at the New Alliance studios, the building will be emptied by the end of May by John DiGiovanni, president of the Harvard Square Business Association and Trinity Property Management, who bought the building for $4 million in 2016 through his business Ledgemoor.

The city won’t continue the building’s use as a rentable arts space if the cost of making it safe is prohibitive, McGovern has said, and an inspection this week – delayed from mid-April – showed “a host of issues.” 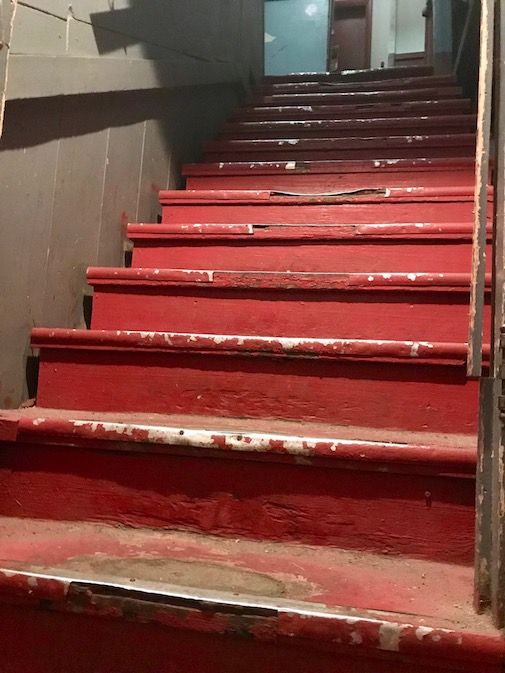 Uneven flooring, many stairwells and locked doors were cited by safety officials as problems at the EMF Building.

The report discussed issues with contaminated soil; asbestos; a deteriorating foundation; confusing layouts with uneven flooring, many stairwells and locked doors; unheated areas where tenants have brought in space heaters; and exposed wiring. But questions arise from the findings, for which inspectors were shown five of more than 60 rooms by management (“the others were described by management representatives as ‘similar,’” according to the report by Tom Cahill, the Fire Department’s chief of operations), including statements of fire hazards that tenants say are provably wrong. Though the documents sound dire, the building and its safety systems have been judged acceptable in recent inspections; the reports also include notes such as “sprinkler system may need to be updated or tested” and “roof needs to be inspected and replaced if necessary” that don’t appear to mean anything.

“We’ve been told many times the building is safe,” Nilles said. “The Fire Department [has been] adamant the building was safe, and now they’re saying that it’s not.”

Based on the report, the city’s Law Department advised the city not to get involved at EMF. But the report is not what was expected, the mayor said.

“What I don’t know is if [the problems inspectors listed] are fixable. While a lot of concerns were raised, we didn’t get answers” about the cost of repairs, McGovern said, or what kinds of expense the city would take on to help prevent more artists from leaving the city, where the arts economy generates $175 million annually with only a small investment by government.

“Certainly in its current condition, the city does not want to be [involved] – but I don’t think anyone thought the building would stay the same,” McGovern said, vowing to follow up with City Manager Louis A. DePasquale in the coming week.

The EMF community is looking into private investment and nonprofit status as a way to keep going, Nilles said, and two efforts to raise consciousness about the arts – especially in Central Square – are in the planning stages.

A “May Day Anti-Art Event” from 6 to 10 p.m. Tuesday at Massachusetts Avenue and Norfolk Street – in front of the former Out of the Blue Art Gallery, which left the city in December after being unable to keep up with rent payments. At this event, on a date significant to the labor movement, musicians will play instruments silently (such as on a guitar with no strings), hang “anti-art” signs, distribute a manifesto and encourage passers-by to sign a petition and other support the arts and artists. “The idea is that it’s being performed, but you’re not getting the benefit of it, because it’s not going to be here,” Nilles said.

An EMF open studios event from 2 to 6 p.m. May 19 with details depending on permitting from the city and a sign-off from DiGiovanni, but possibly including art displays and band performances inside the building and in the parking lot, and an Aeronaut Beer sampling for those 21-plus. All would be invited; neighbors would be invited through building-by-building door knocking. “It’s an attempt to show the bands that would be displaced and invite people in to see what’s happening at EMF, instead of being this mysterious place until ‘Oh, it’s gone now,’” Nilles said.