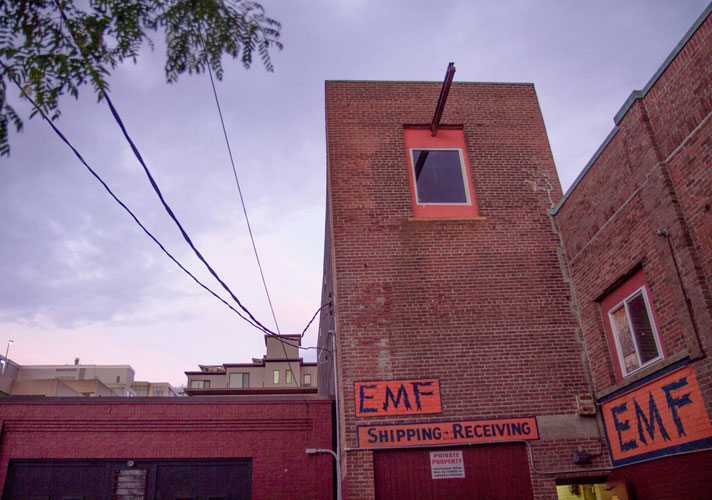 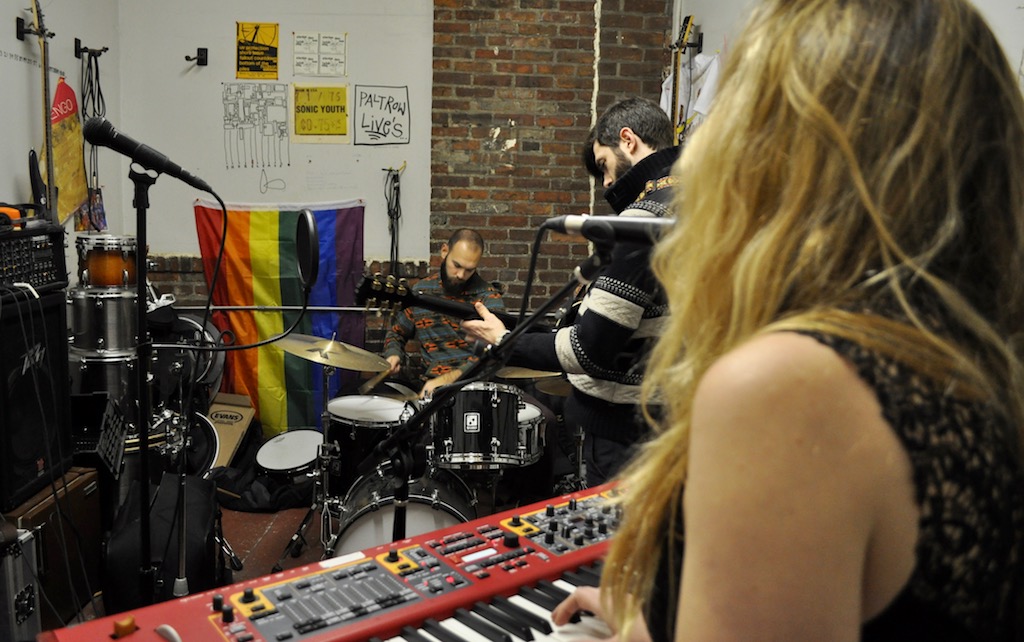 The band Miele rehearses in December in its EMF Building rehearsal space. A fourth member, bassist Cedric Lamour, is elsewhere in the cramped space, rented for a few hundred a month at 120 Brookline St. near Central Square. (Photo: Austin Su)

A team of city officials and staff plan to tour the Central Square music complex known as the EMF Building today or Tuesday to see if it can be kept operating, Mayor Marc McGovern said Sunday.

Otherwise, the hundreds of musicians and artists in its rehearsal spaces and studios will have to leave by the end of May – an additional month from the original eviction notices sent by building owner John DiGiovanni, president of the Harvard Square Business Association and the company Trinity Property Management.

DiGiovanni bought the building two years ago for $4 million and has told The Boston Globe that he had planned a “wholesale renovation” resulting in a building with “some work space,” though he has not discussed the 120 Brookline St. building’s expected ultimate use.

The tour of the building will include City Manager Louis A. DePasquale and representatives of police, fire and inspectional services departments, the mayor said by phone from a weekend education conference. The building was renovated for use by musicians and artists a dozen years ago by William “Des” Desmond, who runs other art spaces in Greater Boston under the Sound Museum label. The building has a suitably rock ’n’ roll industrial shabbiness – but the city has a high standard of safety to meet, and some upgrades are certain to be required.

“They’ll go in with contractors who’ll say ‘This is what it’ll cost to do the work,’ and we’ll see where it goes from there. Hopefully by the end of the week [the city manager] will know whether it’ll take $1 million in repairs or $10,000,” McGovern said.

Former Out of the Blue Arts Gallery founder Tom Tipton guests on WEMF Radio during the days the station was based on Brookline Street. (Photo: Steve Onderick)

DiGiovanni, who bought the 23,554-square-foot, three-story brick structure from 1921 under the business name Ledgemoor, suggested to the Globe that he expected repairs to be significant and impossible to do “in a piecemeal fashion” – similar to earlier mentions of safety hazards and ground contamination that couldn’t be done while the building held tenants, though artists and a legislative aide to city councillor Quinton Zondervan couldn’t find documentation to back up those concerns.

If EMF Building repairs cost a reasonably low amount, the city will ask DiGiovanni for a long-term lease, McGovern said, and the city would turn to running a “request for proposals” process to find a manager for the building, keeping its current uses intact.

“We would want to write an RFP making it as open a process as possible,” he said.

But the costs of repairs do make a difference, he said, despite the fact the city wouldn’t expect to make a profit by running the building.

“We understand this is not a money-making venture. We’re not doing this because the city’s going to make money,” McGovern said.

Not from EMF alone, anyway. City officials voiced approval for an arts overlay district for Central Square on March 26, noting their interest in giving a boost to the square’s cultural offerings through zoning and keeping the city’s annual $175 million arts economy intact. EMF Building tenants have reminded city councillors in public testimony how much money is spent in Central Square as a result of their presence.

The Central Square Cultural District has struggled to advance since winning the state designation in 2012, notably with the loss of a few signature festivals. In December it lost the Out of the Blue Art Gallery to rising rents after two decades, leaving owner Tom Tipton hosting private events in Medford while considering a move as far away as Malden. “Got a lot of verbal support from the city,” Tipton has said. “Verbal support only goes so far … and it’s not far enough.”