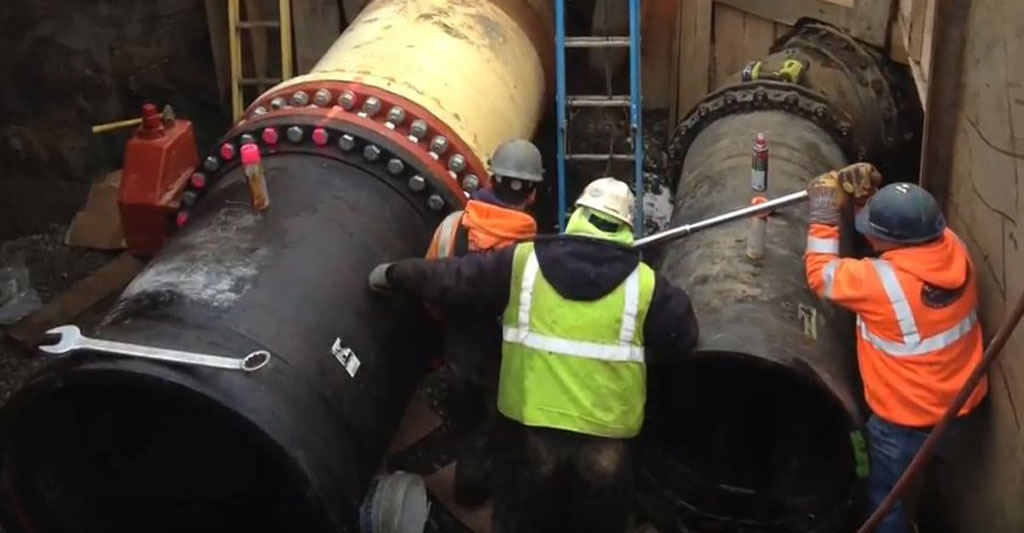 City workers examine pipes being used in the Alewife Sewer Separation Project in an image posted in February. (Photo: Department of Public Works via Twitter)

A long-simmering controversy over the possible use of plastic lining to repair aging water mains surfaced at the City Council meeting Monday when five councillors sponsored an order saying the technology raised “significant health concerns” and asked for assurances it won’t be used in Cambridge without gathering “all relevant scientific information.”

Within minutes, City Manager Louis A. DePasquale addressed the council and gave those assurances. And councillor E. Denise Simmons killed the measure for now by exercising her charter right to delay it by one regular meeting, after criticizing the supporters for questioning DePasquale. “It flies in the face of the competency of our city manager, and that’s something I can’t stand behind,” Simmons said.

But the issue won’t go away so quickly.

The city manager gave similar assurances to councillors almost exactly a year ago – on May 15, 2017. In that message, he said there are “no plans to install ‘plastic’ pipes, including cured-in-place pipes,” known as CIPP. He added, however, that in five years the city may need to repair or replace a large transmission line connecting the water treatment plant with a storage tank at Payson Park in Belmont.

“At this time, we expect this project to use the standard ductile iron cement-lined pipe, and any recommendation from a consultant for deviation from this standard would be discussed at public meetings and would need to meet national standards,” he said.

The CIPP technology was developed in the 1970s and became a popular way to repair sewer and stormwater pipes initially and, more recently, pipes for drinking water. It’s an attractive option because pipes can be fixed without digging up the street: Workers insert a pliable plastic tube in the pipe while it’s underground, then harden the lining and attach it to the pipe interior with heat or ultraviolet light. Boston and other Massachusetts communities have used the method for drinking-water mains, according to a message sent to councillors by the City Manager’s Office. Many more localities, including Cambridge, use it for sewer repairs.

In the year since DePasquale’s original message, members of the city’s Water Board have remained worried that the city will use the method without adequate study, letting chemicals leach from the plastic lining into drinking water. The board held a public presentation May 2, 2017, at which two academics questioned the safety of plastic-lined pipes. One, Purdue University environmental engineer Andrew Whelton, said chemicals in water discharged from CIPP-repaired stormwater pipes had caused fish kills, among other environmental damage. Whelton said the National Sanitation Foundation, which has promulgated standards for the method in water mains, doesn’t test drinking water in affected pipes for all chemicals of concern. Some foundation-approved products have leached chemicals, he said, and overall, “there is very little information available.”

The other speaker, Princeton University biologist Joan Ruderman, said “many epoxy resins” such as the plastics used in those pipes contain bisphenol A, or BPA, which can affect the endocrine system, Ruderman said. After information about BPA emerged, many makers of plastic products removed it from their merchandise.

The city has continued to assure the board in general and in relation to the Payson Park transmission line that CIPP won’t be used unless it’s shown to be safe. But the issue has continued to percolate, apparently coming to a head this month when the Water Board was told that the technology had been employed in the water system, albeit in a small section of pipe that doesn’t serve residential customers and where a conventional repair would have been very difficult.

Nine hundred feet of pipe on Main Street, between Ames and Wadsworth streets, was repaired with CIPP in 2014 to plug a leak, when Richard C. Rossi was city manager. DePasquale’s office told councillors about this May 18 after a couple who attended the Water Board meeting wrote to the council expressing outrage that CIPP had been employed despite concerns about health impacts, and urging that the plastic be removed to eliminate “contaminated water.”

The city has also used other plastic pipe repair techniques when Robert W. Healy was city manager: in an 800-foot line serving the MBTA/Amtrak repair facility near CambridgePark Drive, fixed in 2008; and a pipe under the Little River between Discovery Park and the Wetland Park at the end of CambridgePark Drive, repaired in 2011, DePasquale’s office said. All three pipes using plastic were described as presenting special challenges to repairs.

Asked when DePasquale found out about about the prior uses of CIPP and plastic pipe, and whether he knew when he gave assurances in May 2017 that the technology wouldn’t be employed without study, spokesman Lee Gianetti didn’t answer. He said the city manager took office in 2016, after the three cases, and that DePasquale wrote “to clarify questions he received after the May 2, 2017, Water Board meeting” where the academics raised safety concerns.

Hotels, eateries, offices – but no residences

Water Department Managing Director Sam Corda confirmed Thursday that none of those pipes serve residential customers. The department turned to CIPP on Main Street because the MBTA subway tunnel on Main Street made excavation difficult, he said.

That section of Main Street includes hotels, stores, restaurants, office buildings and technology centers – but no residential customers. Corda pointed out that the lining material the city used has been approved by the state Department of Environmental Protection and the American Water Works Association and met the NSF standard. “We have never installed anything” that didn’t meet state and foundation requirements, he said.

Corda questioned fears about bisphenol A, saying he had seen test results of water from plastic-lined pipes where the BPA level was undetectable. He also said Whelton, the Purdue University environmental engineer, “has never provided any information” to the department contradicting authorities’ approval of the plastic linings.

The Water Department intends to hire a consultant to research available data on water quality in CIPP-repaired pipes, Corda said. Results will be discussed in a public workshop of the Water Board and Water Department officials, probably in September or October. Then staff at the city’s Public Health Department will examine the health risks and benefits of using the technology, reporting on that at a public meeting probably held in November or December, Corda said.

At the same time, the Water Department is inspecting the condition of the 12,000-foot, 40-inch pipe from Payson Park to the Cambridge treatment plant, Corda said. Depending on what needs to be done, if anything, and what the studies show, the department could recommend using CIPP or a traditional cement-lined iron pipe, he said.

He reiterated that “it would be foolish” to employ CIPP before it’s shown to be safe. “We always want to do the right thing” to protect drinking water, Corda said.

This post was updated May 26, 2018, to add comments by city spokesman Lee Gianetti.