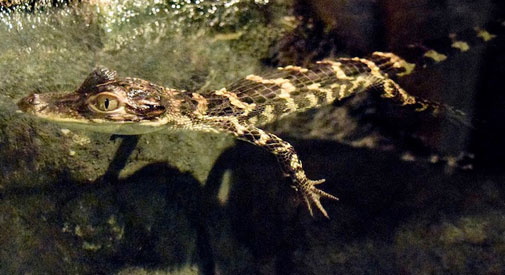 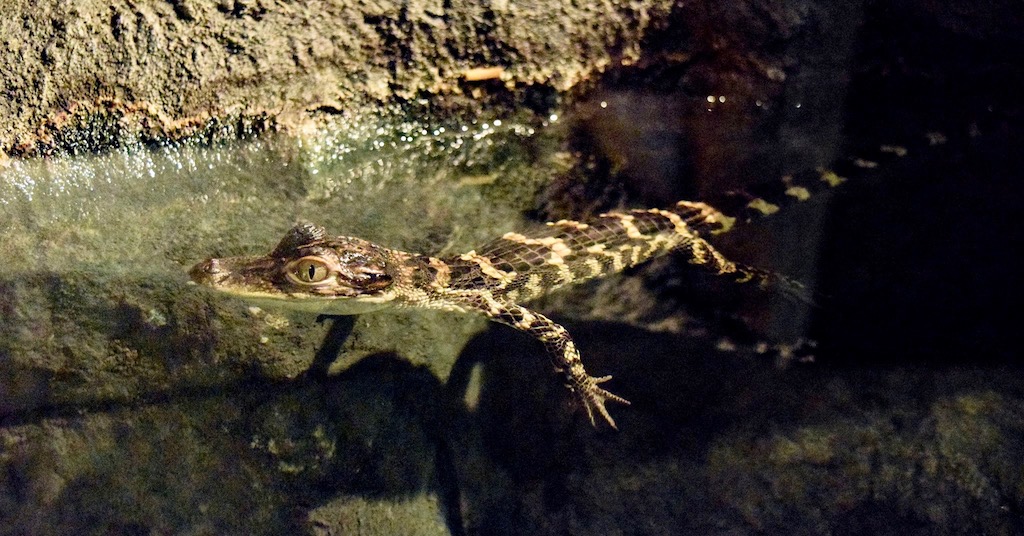 “They’re not real, are they?” a woman asks, standing in front of a glass case of American alligator hatchlings.

They are indeed real, but with these often statue-still animals, it can be hard to tell the difference without a label marked “live animal” and “model” – in this case, “live animal” is circled. Each of the hatchlings is about 9 inches from nose to tail, at most. They wouldn’t look out of place in a pet shop, with their big eyes and perpetual smile. It’s hard to believe they will grow into up to 15-foot predators.

The Museum of Science’s summer exhibit, “Crocs: Ancient Predators in a Modern World,” shows visitors that crocodiles and alligators are more than swampy ambush predators waiting to drag them under, but a unique and successful group of animals that have outlived even the dinosaurs.

The medium-sized exhibit (about a 45-minute minimum time commitment but can take easily over an hour to take in the full experience) is colorful and interactive for kids, but with enough depth of information to be interesting for visitors of all ages, making it a solid choice of family activity.

The exhibit is crammed with digital content, stopping just short of being overloaded. “Digital assistants” – recorded videos of experts – are placed every few steps throughout, triggered by motion sensors as you walk by. A touchscreen lets you choose a question to ask, an elegant solution to providing information without excessive text. For the most part, these are unobtrusive, thanks to low volume and subtitles, but certain videos are too loud.

Digital media aside, “Crocs” still has a healthy dose of traditional museum props: the posters filled with colorful diagrams and factoids, small activities to show crocodiles sounds and bite strength and, of course, live animals.

At least four species are on display – two types of caimans, the alligator hatchlings, and the critically endangered Siamese crocodile. The Siamese is the biggest at about 5 feet. In the case of live animals, the Museum of Science could have taken better care. Aside from two bored teenaged staff members, there was no one near the animal cases to prevent visitors (especially young children) from tapping on the glass and harassing the animals.

At its heart, the exhibit is about conservation. Despite having survived for more than 200 million years, this wildly successful group of animals could be wiped out virtually overnight. After bombarding you from all directions with interesting facts, the exhibit wraps up by examining modern crocodilians’ relationship with humans. Aside from a couple of the biggest species, for most crocodilians, humans are not on the menu, and we’re a bigger threat to them than they are to us. Despite their fearsome appearance, it hasn’t gone well for the former due to hunting and habitat loss.

“Crocs” will be open through Sept. 3 at the Museum of Science, 1 Science Park, Boston, on the Cambridge border. The exhibit is on the first floor of the museum’s Blue Wing and is included in the price of general admission (that grants access to everything in the museum) which is $28 for adults, $23 for kids and $24 for seniors.