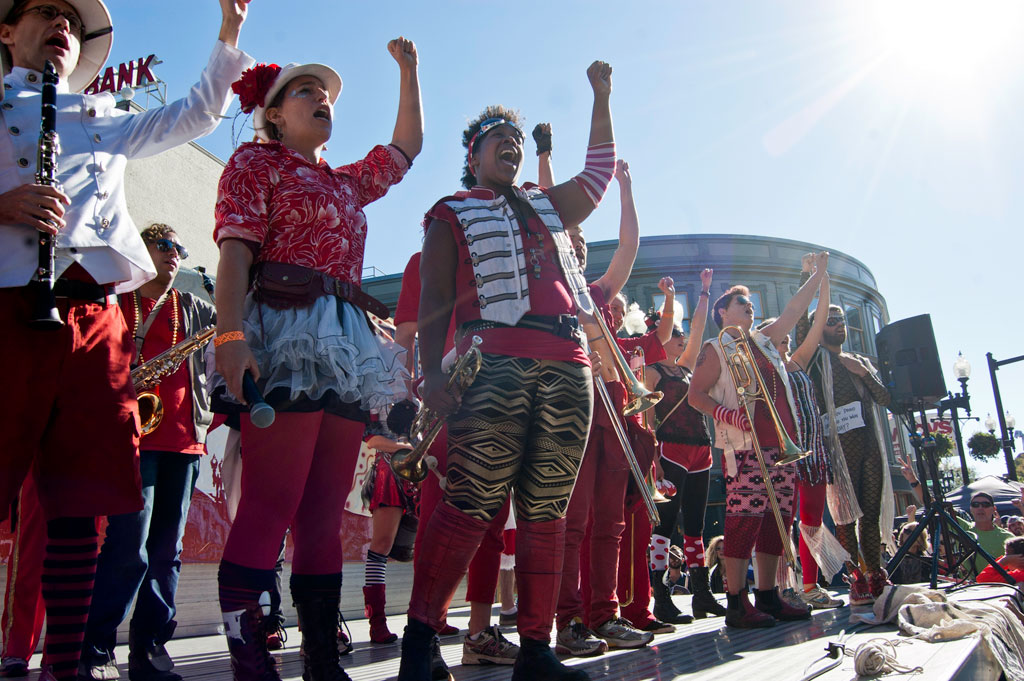 The organizing committee for the Honk! Festival of Activist Street Bands considered skipping its annual parade to Harvard Square’s Oktoberfest this year as a way to protest artist evictions at the EMF Building near Central Square.

The building is owned by John DiGiovanni, a businessman who is also president of the Harvard Square Business Association’s board of directors. The association organizes the Oktoberfest event; in addition to the 40th annual Oktoberfest, it will be the 13th time Honk! bands will march to and play during the event after two days in Somerville’s Davis Square.

DiGiovanni bought the EMF Building two years ago for $4 million and this spring gave its 200-plus artists and performers short notice to leave so he could renovate the building for a new use, contributing to an exodus of arts as the city becomes increasingly unaffordable – but acting as a patron of the arts when it benefits Harvard Square and the business association. EMF artists formed the Cambridge Artist Coalition to fight the eviction and protest DiGiovanni.

“The organizing committee has been very aware of the EMF situation and have been discussing for probably two months ways that the Honk! Festival may want to do the right thing,” said Ken Field, a member of the committee. “We waited for a while because we had understood that the [EMF artists] might call for a musical and artistic boycott of Harvard Square.”

Instead, the committee and EMF artists decided together to continue the Oktoberfest tradition and use it as a way to communicate concerns to the more than 200,000 people who attend, Field said. “We also appreciate the opportunity to reach out to that huge audience for other issues that we try to allow the bands to bring to the table,” Field said.

The street bands come from around the country and world to play music and address social justice issues; a $15 minimum wage has been a focus in recent years. Some 600 musicians typically take part in the event, and event publicist Mary Curtin said Thursday that she expected this fall’s event would be “as large, if not larger” than previous top turnouts of up to 30 bands, “given the raw political climate.”

It’s the size of Honk! and numbers of people involved that made the arts activists question the feasibility of redirecting the parade away from Harvard Square as a show of solidarity, said Ben Simon, an EMF musician and coalition leader.

“Because Honk! is coming up so soon, and redirection would be a huge undertaking, they instead offered to give us some sort of platform to get a message out at the festival,” Simon said. “We’re still in the process of figuring out exactly what that will look like … needless to say, whether it will be specifically about the EMF situation or not, we will be looking to elevate the issues facing artists living in Cambridge and Greater Boston.”

Honk! is a free festival taking place Oct. 5-7, ending that weekend at Oktoberfest. More details will be available after the Labor Day weekend, organizers said.

The EMF effort has an earlier calendar date to watch for: Simon and others are asking the Historical Commission to consider landmarking the EMF Building, a 1921 brick structure that housed an electrical supply company before being turned into an arts building more than a decade ago while retaining the industrial look and feel. A landmarking would force DiGiovanni to also keep the exterior intact without commission approval for changes.

“This protection might prevent DiGiovanni from turning the building into luxury housing which would require adding windows to the building, and might in turn make it more likely that the building could return to its former function as an music rehearsal space. At the very least it would send a powerful message to DiGiovanni and other developers that they cannot trample our community in pursuit of profit with impunity,” coalition members said.

The commission will hear testimony about a potential landmarking at its meeting at 6 p.m. Thursday at City Hall, 795 Massachusetts Ave., Central Square. Information is here.