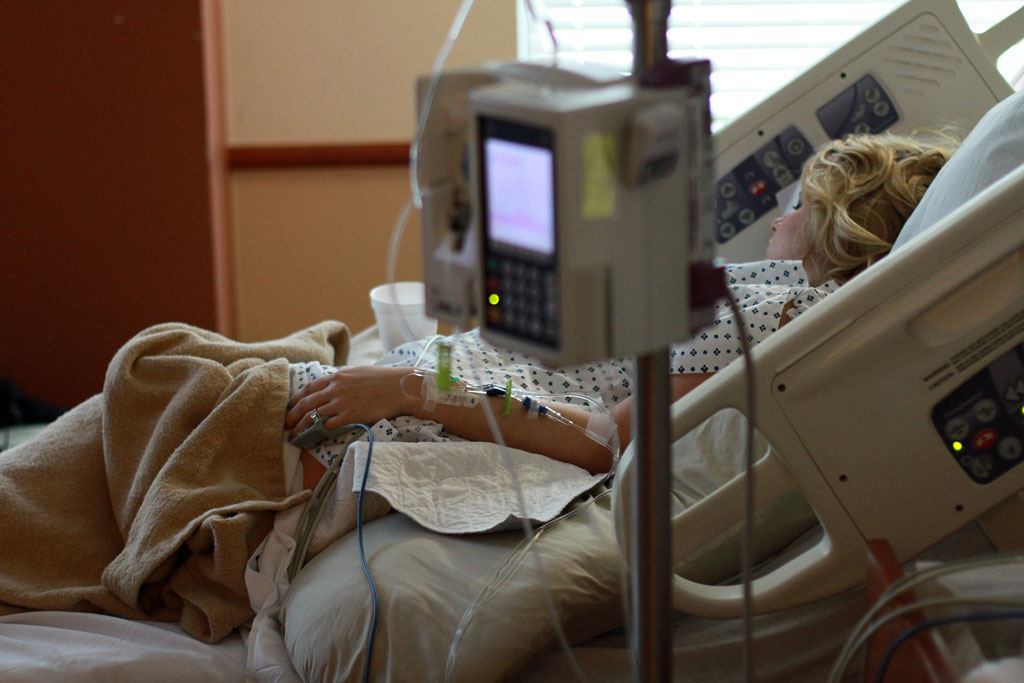 Cambridge Health Alliance told state health officials it has changed its policy for management of patient who have ha cesarean birth procedures. (Photo: Parentingupstream via Pixabay)

A woman suffering a rupture of her uterus in childbirth is an exceedingly rare and dangerous event, occurring in about 26 out of 100,000 births, according to federal statistics. Yet it happened to two women giving birth at the Cambridge Health Alliance’s Cambridge Hospital on two consecutive days last November.

Those incidents and a third, when a patient at CHA Everett Hospital was sent back to a nursing home with an incorrect list of medications and had to be rehospitalized, drew state inspectors to the Health Alliance in January. The Department of Public Health cited the Alliance for serious violations – not for the occurrences themselves, but mostly for taking months to correct the problems that contributed to the incidents.

Inspectors found the health care system in compliance on a follow-up visit in March.

The uterine ruptures occurred Nov. 11 and 12. Both women had undergone at least one previous cesarean and wanted to give birth vaginally, a known risk factor – though a low one – for rupture. Labor failed and doctors had to perform emergency cesareans; the inspection report didn’t say whether the emergency surgeries were needed because of ruptures or for some other reason. 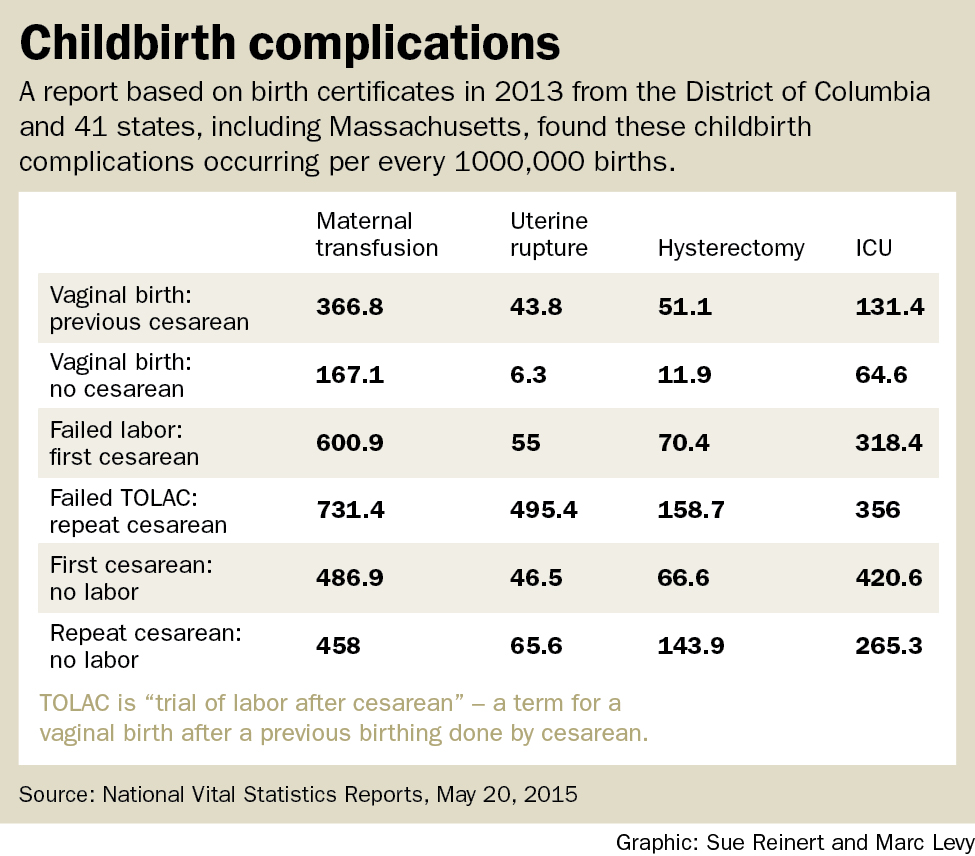 The report quoted hospital documents as saying the babies were “wellborn” but didn’t mention the mothers’ conditions. And a hospital spokesman declined to provide more, saying CHA does not disclose “individual patient information.”

In a statement, spokesman David Cecere said the Alliance “actively promotes a culture of safety and is committed to delivering the highest quality of care and safety for our patients and their families, staff and providers.” It also encourages “transparency” and urges employees to report mistakes, he said.

According to the inspection report, both women were being cared for by certified nurse midwives. There were few other details about the events except for dates and times. But some clues about what might have gone wrong was provided in a list of “contributing factors” prepared by CHA after an internal investigation and quoted in the report. Those included:

“Inconsistency” in how patients trying to give birth vaginally after cesareans were managed jointly by nurse-midwives and obstetricians.

No policy for when such patients would be tested to determine what type of blood was needed for transfusions.

Nurses not being empowered “to advocate for patients for robust integrated clinical management.”

Waiting too long to talk about anesthesia decisions, which should be discussed during pregnancy and again during labor “prior to urgent need for anesthesia services.”

Not enough communication over “proper patient management and awareness of birth treatment plan as labor evolved.” More than “twice-daily rounds” was needed, according to the list.

Screening of nurse-midwife patients who were to be managed with obstetricians, which needed to be reviewed.

The hospital told state health officials it changed its policy for “Management of the Patient with a Prior Cesarean/Cesareans,” but the state document didn’t say how. Asked for details, Cecere didn’t answer the question, but said: “Any changes to our processes are in the spirit of continuous improvement for the quality and safety of our patients and services.”

The hospital’s plan to correct the violations, included in the state inspection report, said “communication around management of TOLAC patients has become more prescriptive,” using a term for “trial of labor after cesarean.”  Cecere didn’t explain that statement when asked, but said the hospital continues to care for such patients.

Despite the hospital itself identifying nurses’ not feeling able to advocate for patients as a contributing factor to the uterine ruptures, the health care system’s plan of correction said there was no problem on that issue based on a 2017 survey of nurses.

The system was found in violation because officials hadn’t corrected procedures months after the ruptures and the medication error; changes weren’t in place when inspectors arrived on Jan. 8. The Nov. 12 rupture wasn’t even reported to managers until Dec. 5, when the Alliance’s risk manager heard about it “verbally,” the report said.

The hospital’s internal investigation of the ruptures didn’t occur until Dec. 20, and the Alliance’s chief medical officer postponed action on the report until Jan. 30. The system’s response to the findings said the incidents had “undergone review by the obstetrical service” at meetings Dec. 14 and 21 with “proposals” for improving patient safety “already in place.”

The changes outlined in the Alliance’s response had completion dates in January and February of this year, though.

The medication error Oct. 13 occurred because the doctor who discharged the patient used an outdated medication list from the Alliance instead of checking the list of drugs sent by the nursing home where the patient lived, the report said. The patient suffered low blood sugar and low blood pressure because of the mistake and had to be transferred to a hospital again, the state report said.

After the incident, a senior physician spoke to the medical resident – a physician-in-training – who discharged the patient and “reviewed” with the resident that “the most accurate list of medications for a patient admitted to the hospital from another facility … is the list on that referral form,” the report said. But managers didn’t inform any other residents, and apparently didn’t consider doing that until the state inspectors pointed out the omission in January.

There has been growing concern about the increasing number of cesarean sections; the surgeries are not always necessary and increase risks and costs. In Massachusetts, cesareans rose from 22.3 percent of births in 1990 to 31.3 percent in 2016, the most recent state analysis says. Trying to counter the trend, public health officials, professional medical groups and women’s advocates have encouraged vaginal birth after cesarean, or VBAC, when it’s safe. Studies have shown that some women may be better candidates than others; for example, those with multiple previous C-sections generally face more risk than those with one. Research has also shown that inducing labor in “trial of labor after cesarean” patients can increase risk.

Women who try to deliver vaginally after a cesarean can be successful as much as 70 percent of the time. But if they aren’t, and have to undergo another cesarean, their risk of complications rises. A report based on birth certificates in 2013 from the District of Columbia and 41 states, including Massachusetts, found that the incidence of uterine ruptures per 100,000 births was seven times higher for failed TOLAC attempts as it was for cesarean deliveries without a trial of labor.

Massachusetts’ latest birth report, for 2016, found that at Cambridge Hospital, 33 births of a total of 1,019 were successful vaginal births after cesarean. There were 275 cesareans.

The state’s inspection visit from Jan. 8-10 was the latest in a string of inspections for the Alliance, the ninth in the past three years. The health care system has been cited for numerous violations of Medicare standards and safety requirements, ranging from minor to serious.

In December, the Alliance agreed to pay a penalty of $90,000 in the case of a woman who died after she couldn’t get into the Somerville Hospital emergency room and employees didn’t search for her outside. The Office of Inspector General of the federal Department of Health and Human Services said its investigation found that the door to the emergency room from the ambulance bay was “locked and unattended.” The state investigation report said the woman couldn’t find the entrance.

The penalty was for violating a federal law that requires hospitals to evaluate anyone who comes to the emergency room, and to treat an emergency condition or stabilize the patient before transfer. The law was enacted to prevent “patient dumping” – refusing to treat emergency room patients because of inability to pay or, in some instances decades ago, race.

The Alliance is also in the process of buying and installing new beds for psychiatric patients, beds that don’t have potential attachment points for cords that could be used by patients to harm or kill themselves. CHA promised to replace its beds during an inspection last year that occurred after a patient committed suicide. The suicide didn’t involve the beds, a spokesman said last month.