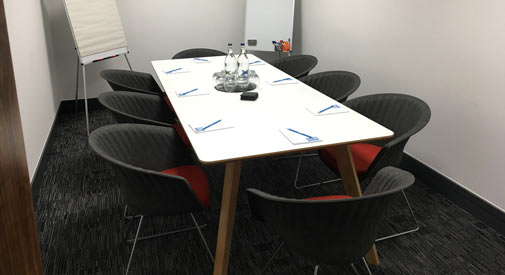 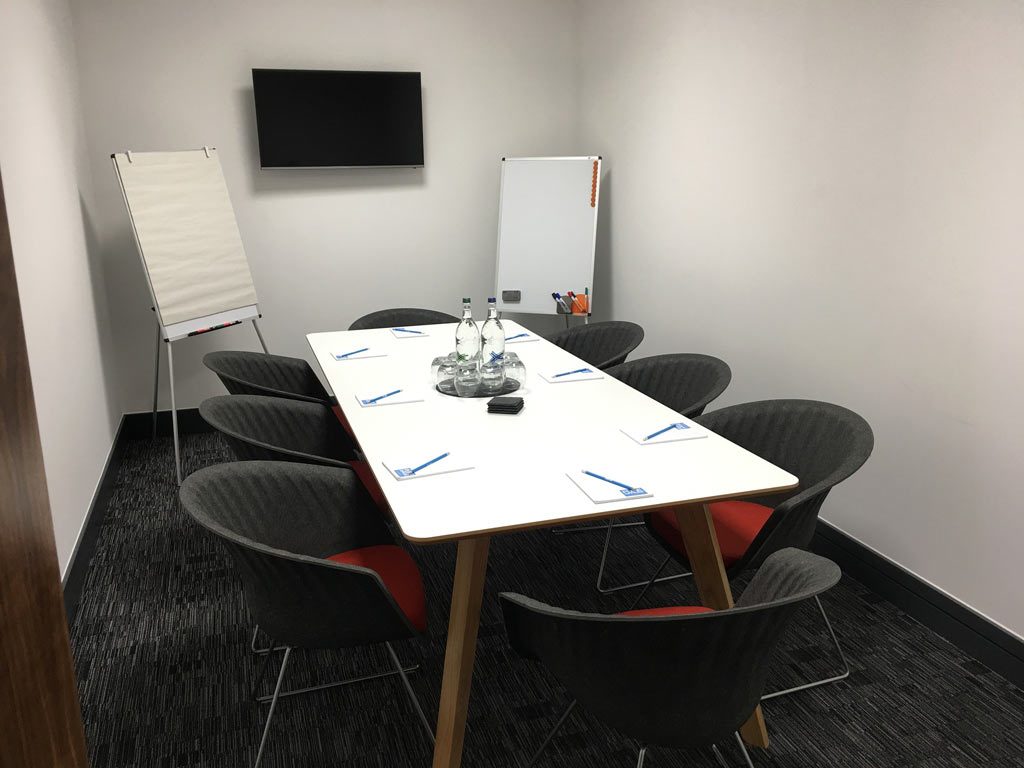 Oh, did we not say why anyone should bother to attend this meeting? (Photo: Joanne1965 via Pixabay)

Our city government has a general, fuzzy commitment to the idea of transparency without caring about how to pull it off, and certainly no displayed sense of urgency about following through. Last December, city managers and Lee Gianetti, the city’s director of communications and community relations, received an eight-page, 35-minute summation of several transparency concerns about Cambridge government. In what has become classic form for the City Manager’s Office, the officials simply haven’t bothered to respond to the points outlined in the document or at that meeting nine months ago.

There are longtime issues, but some have worsened since the arrival of City Manager Louis A. DePasquale in October 2016. (For instance, the License Commission transcribed its meetings in full through Aug. 17, 2017, but after that went to audio records and sketchy minutes that at least initially gave time stamps for the audio, so you knew where to look in hour-plus recordings; that effort lasted only a couple of weeks, and the commission hasn’t pretended to make things easy for a full year. Total city manager efforts toward transparency in the past year seems to be getting the commission to post those terse minutes as searchable text, not as an unsearchable image.) The city managers were also alerted that the commission Web page document search function doesn’t work. Nine months later, it still doesn’t, with no word on why; if there’s a workaround; or if anything is being done about it.

The contempt with which the City Manager’s Office treats concerned citizenry and its careless approach to government transparency is a constant surprise considering how often elected officials talk about the value of public engagement and the constant need to bring more people into civic life. This is also a city that showed in the Sept. 4 primary that it wants Jay Gonzalez for governor and even more strongly hoped Josh Zakim would be secretary of state (51 percent of the vote in Cambridge, only 33 percent statewide), and both had government transparency as prominent parts of their platforms.

There’s a more basic problem here, though: the inconsistent and all too often perfunctory entries on Cambridge’s online calendar.

If you’d been interested in municipal meetings this week, for instance, you’d have found this agenda for the Peace Commission – note the lack of linked documents, let alone a description of what will be addressed in the “executive director’s report” or even a description of what constitutes “unfinished business” or if the commission knows any of the “new business” that will be brought up: 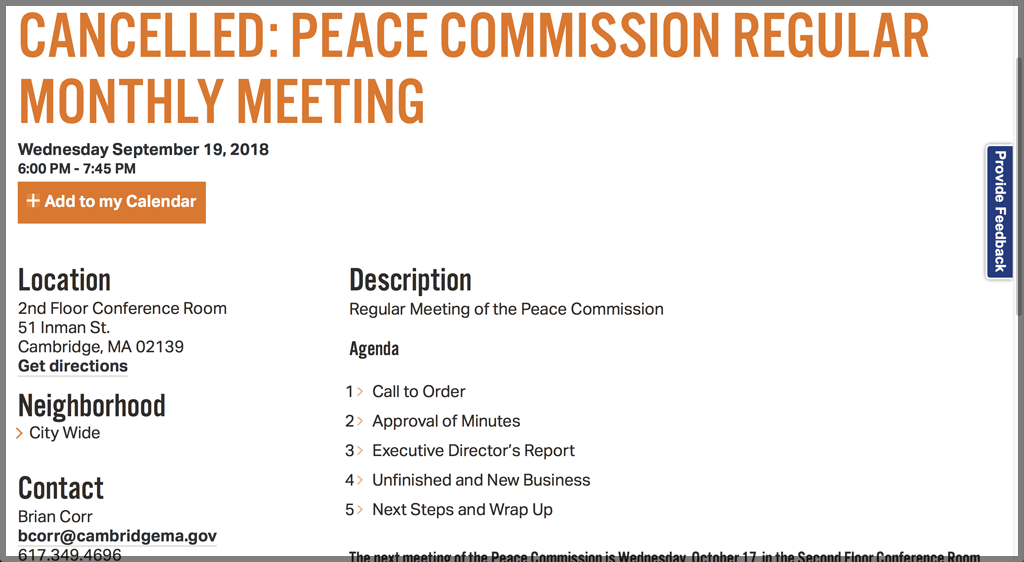 How about the Family Policy Council meeting the next day? It says there will be a “Cradle 2 Career Pipeline Presentation and Discussion,” but there’s no link to the presentation. 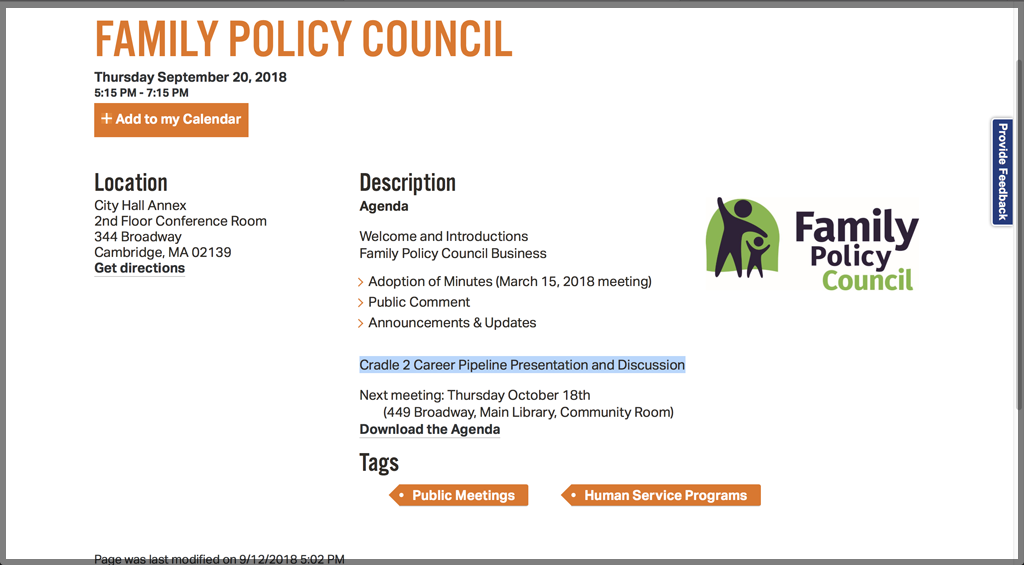 There’s a link to download the agenda, but here’s what you see when you click on it: An identical lack of information. 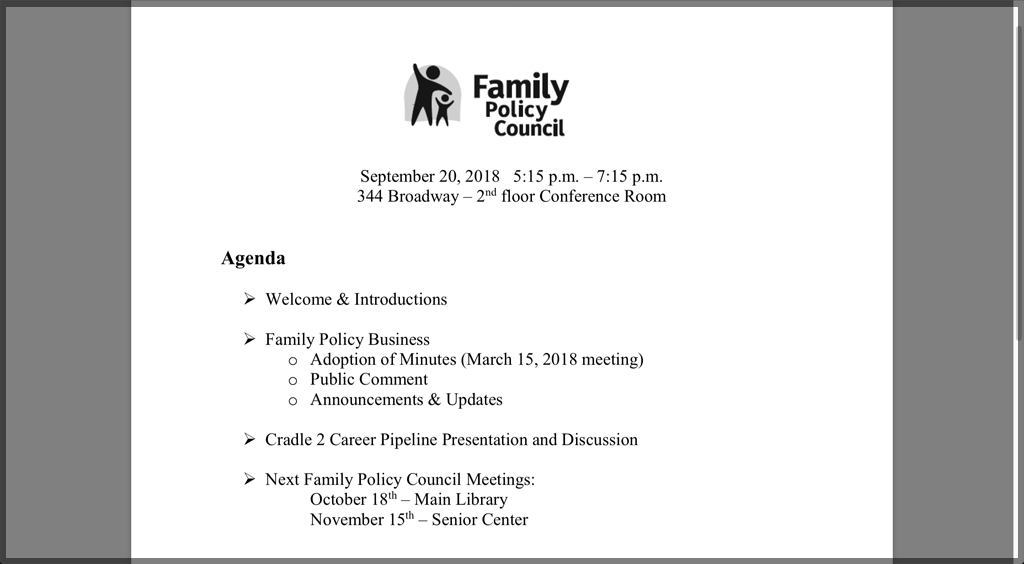 How about Envision Cambridge, the $3.3 million citywide development master planning process meant to guide us through the coming decades? You might have seen this two-hour event on the city calendar: 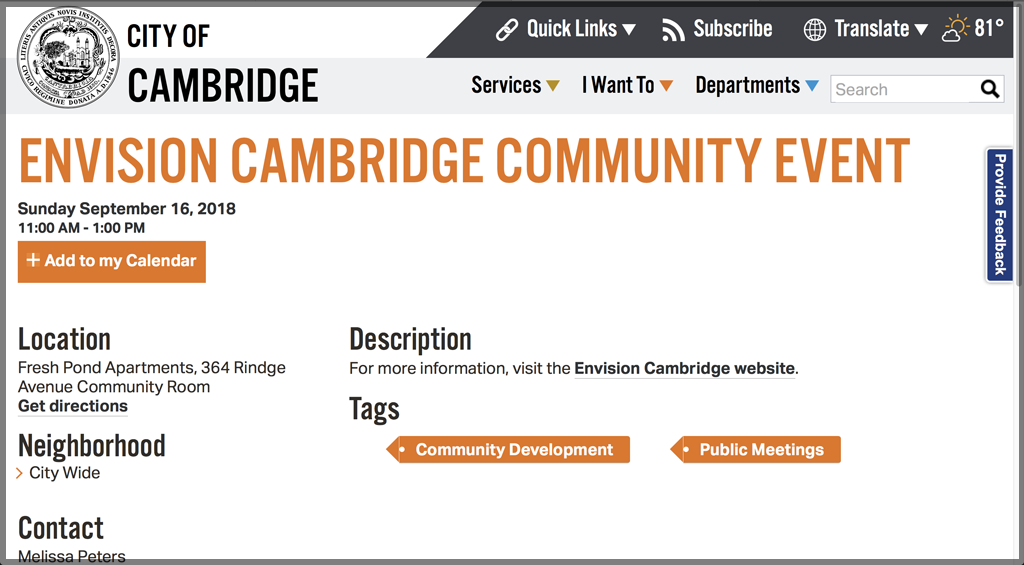 For the missing information on this “community event,” you might have gone to the Envision Cambridge website, where you would find this explanation of what it’s all about: 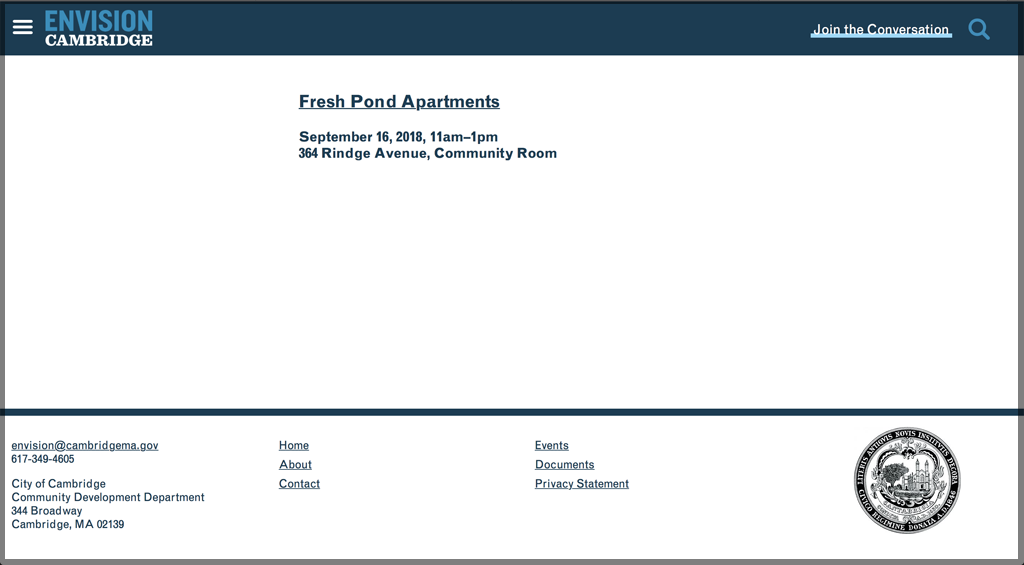 These are the efforts of a process that boasts of its outreach efforts (“an inclusive and wide-reaching engagement program”) in getting public opinion on Cambridge’s future, but can’t be bothered to add a sentence explaining a community event the community is ostensibly supposed to attend. It’s also at least the third example within a week of a nearly information-free entry on a website into which the city has likely poured significant initial resources for righteous purpose – only to squander it. While there are several calendar postings that at least provide the ability to follow links to serious information (A-listers such as the City Council and Planning Board), too many are boiled down to information that’s of the barest use to anyone not already in the know. If you already want to go to a Peace Commission meeting, you can use the calendar to find out when and where it is; if you don’t already want to go to a Peace Commission meeting, you’ll never be induced to attend by learning it will include “unfinished and new business.”

This is in line with the feckless approach taken to transparency issues in general by the City Manager’s Office – of course we care, but we already proved that by creating a citywide calendar – and representative of too many initiatives where the process can’t achieve the goal. It’s why developers have been obliged to build ground-floor retail (so we can have activated city streets) that goes unfilled for years, or why we have formula retail rules (chains are “less-desirable uses”) to promote small business that can be thwarted by Amazon capitalizing a single letter on its sign. In this case, agencies, programs or departments such as the Peace Commission, Family Policy Council or even Envision Cambridge don’t have standards to which they must adhere, or at least there isn’t anyone making sure the standards mean anything.

Without that, the city isn’t getting the value it put into that calendar, and it won’t get the kind of engagement officials say constantly that they want. If the city doesn’t want to fix its transparency failures, maybe it can at least fill in the calendar.