A week of events in Cambridge Somerville: Susan Orlean, holiday pops, Bard in the Yard 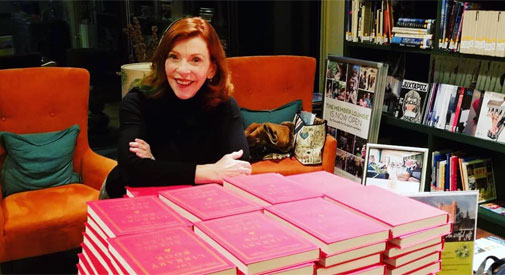 A week of events in Cambridge Somerville: Susan Orlean, holiday pops, Bard in the Yard

Susan Orlean reads from “The Library Book” from 6:30 to 8 p.m. at the Cambridge Main Library, 449 Broadway, Mid-Cambridge. Free, sponsored by Harvard Book Store, Mass Humanities and 826 Boston. Orleans, author of “Rin Tin Tin: The Life and the Legend” and “The Orchid Thief,” will talk about what happens behind the stacks and explore the mystery behind a 1986 inferno at the Los Angeles Public Library that consumed 400,000 books and damaged 700,000 more. Information is here.

Tufts Flute Ensemble performs from 8 to 10 p.m. at the Granoff Music Center at Tufts University, 20 Talbot Ave., Somerville. Free. Expect music from the 18th to the 21st century for piccolo, C flute, alto and bass flutes. Information is here.

Bard in the Yard from 5:30 to 7 p.m. at Houghton Library, at Quincy and Harvard streets in Harvard Yard. Free, but RSVP. The Hyperion Shakespeare Co. presents an evening of scenes from “Twelfth Night,” “Othello,” “Henry IV, Part 1” and “Sir Thomas More” staged throughout the library galleries. Information is here.

Prohibition Repeal Party from 5 p.m. Wednesday to 12:30 a.m. Thursday at Saloon, 255 Elm St., Davis Square, Somerville. Entry is $15 (with fees, $16.49). Federal Prohibition on alcohol ended this day in 1933 – celebrate the anniversary by showing up in period finery, listening to jazz and swing and imbibing classic cocktails, starting with a glass of punch included in the price of admission. Information is here.

Myles Taylor reads at the Boston Poetry Slam, 7:15 p.m. to midnight at The Cantab Lounge, 738 Massachusetts Ave., Central Square. There’s a $3 cover for this 18-plus show. The slam master of the Emerson Poetry Project and editor of the @Corridors literary magazine reads after an hour of open mic starting at 8 p.m. Information is here.

Ice Sculpture Stroll from 6 to 8 p.m. at Assembly Row, 300 Grand Union Blvd., Somerville. Free. There are nine sculptures to discover at this second annual event, with live music and retailer giveaways while supplies last. Visitors are invited to bring a new, unwrapped toy to donate to homeless children. Information is here.

Friends of Central Square Gala from 6:30 to 9:30 p.m. at Sonia, 10 Brookline St., Central Square. Tickets are $25. Performances from The Dance Complex, ImprovBoston and guitarist Fred Woodard, a silent auction including items from local stores and organizations, and food and beverages by The Middle East celebrate a year of work in the square, including its mural project, renewed designation as a state Cultural District and creation of a business improvement district. Information is here.

Old School Game Show Holiday Special from 8 to 11:30 p.m. at Oberon, 2 Arrow St., Harvard Square. Tickets are $20 to $25. Musical guest Ali McGuirk adds to the fun of this live, interactive theatre experience in the style of a 1970s television game show, with audience members able to play and win prizes. Information is here.

“Intertwined” from 7:30 to 9 p.m. (and repeating Saturday) at Green Street Studios, 185 Green St., Central Square. Tickets are $15. The Alive Dance Collective, founded in 2014 by Brenna Banister, presents its third show, a performance about the human race’s innate desire to connect. Information is here.

Arneis Quartet from 8 to 10 p.m. at Killian Hall in the Hayden Library Building at 160 Memorial Drive at the Massachusetts Institute of Technology. The quartet plays American composers Elena Ruehr, John Harbison and Ruth Crawford Seeger, including a rare performance of her 1931 “String Quartet.” Information is here.

“Santa Claus Conquers the Martians” in radio-play style from 8 to 10 p.m. (and repeating Saturday) at Unity Somerville, 6 William St., just off College Avenue near Davis Square, Somerville. General admission is $15. An original adaptation of the 1964 Christmas classic film in which Martians kidnap Santa Claus (and a couple of Earth children) and bring him to Mars to make toys for their own kids. Information is here.

An Evening with Poet Tino Villanueva from 7 to 10 p.m. at Grolier Poetry Book Shop on 6 Plympton St., Harvard Square. General admission is $50. Reading from “So Spoke Penelope,” published by the Grolier Poetry Press, as well as a discussion, book signing and a reception with wine, Prosecco, Italian and Spanish food and dessert. Maria Azucena Lopez Cobo reads Spanish translations, and Livia Meneghin reads Italian translations. Information is here.

Off-Mic comedy night from 8 to 10 p.m. Friday at Gallery 263, 263 Pearl St., Cambridgeport. There is a suggested donation of $10 at the door. This neighborhood art gallery is so intimate that amplification is often unnecessary – and without a microphone, a barrier between performer and audience is knocked down, helping give audience members a behind-the-scenes look at the creative process of performing. Comics coming to the stage include Rob Crean; Bethany Van Delft; Brian Higginbottom; Angela Sawyer; Mike Holmes; and Alex La. Beer and wine will be available. Information is here.

Holiday Pops with the Cambridge Symphony Orchestra  from 7 to 9 p.m. at The Center for Arts at the Armory, 191 Highland Ave., Somerville. General admission is $20 (with fees, $22.03). Bass-baritone Javier Ortiz and Santa Claus join the orchestra for its annual performance of seasonal, Broadway and Hollywood favorites, including traditional carols and John Williams’ “Star Wars” suite. Information is here.

“Santa Claus Conquers the Martians” in radio-play style at 2 and 8 p.m. at Unity Somerville, 6 William St., just off College Avenue near Davis Square, Somerville. General admission is $15. Information is here.

Artist Takeover from 11 a.m. to 5 p.m. at Spaceus, 20 Brattle St., Harvard Square (and continuing Sunday). Free. A shifting set of artists – though mainly in the practical art fields of jewelry, pottery and the like somewhat handy for holiday shopping – get space to showcase their work weekly. Today it’s Jessica Simes; Savannah Barkley; Theodore Sloane; Alison Vu; and Liz Segal. Information is here.