‘Mary Poppins Returns’: Grown-up Banks tots need their nanny back, and really we did also 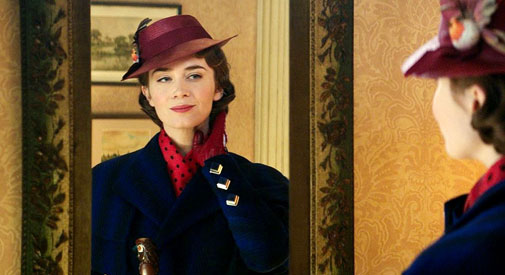 ‘Mary Poppins Returns’: Grown-up Banks tots need their nanny back, and really we did also

It’s been almost 55 years since Julie Andrews and her magic umbrella descended on Cherry Tree Lane in “Mary Poppins” back in 1964. Given that jubilee-plus swath of time, it’s amazing no one attempted a sequel, but perhaps the real snag was trying to find an actress with the right blend of creamy, wholesome strictness Andrews so imbued into that beloved nanny role. The wait, however, proves worthwhile, and the casting of Emily Blunt in “Mary Poppins Returns” is something of an inspired choice. She mixes in a dash of sass and sauce to make the role her own while paying respectful homage to Andrews. 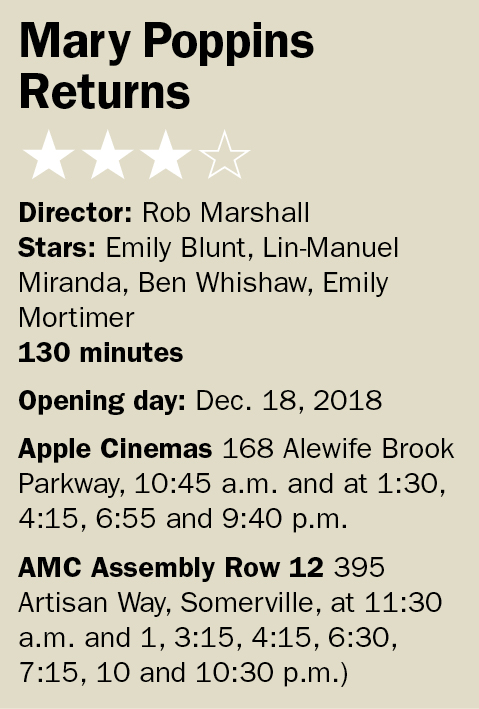 The story, penned by David Magee from P. L. Travers’s 1935 novel, “Mary Poppins Comes Back,” revolves around the now grown-up wee ones from the original, Jane (Emily Mortimer) and Michael (Ben Whishaw), with Michael widowed and living in his parents’ old home with his own charges to care for. It’s a busy house, fraught with near chaos but full of love and integrity – and the bank Michael works for (a barbed twist) wants to repossess it. The time is the economic downturn in London known as the Great Slump, and while the cruel circumstance feels like something from the pages of Dickens, it also suggests something executed coldly by the current administration.

You could imagine Magee and director Rob Marshall wrestling with the idea of trying to update the tale for contemporary times, but smartly the pair hold fast. Remember, this is the Marshall who made the Jazz Age sing in the raucous Oscar-winning “Chicago” (2002); and it’s also still Disney, which built an empire off wholesome family fare before the blockbuster wham-bam of Star Wars and the Marvel Universe. For folks who know primarily about the derrière lifts of Kardashians and the assorted dealings of former presidential attorneys, “Mary Poppins Returns” is destined to be a pure wintergreen breeze of prim revelation. In short, it’s transportive, with apt dashes of magical digression. Buttoned-up fantasia, if you will, lush and infectious.

Marshall knows musicals and gets the sets, staging and numbers down to a science, but it’s Blunt – who’s partaken in such diverse works (and with mixed results) as “The Devil Wears Prada” (2006), “A Quiet Place” (2018) and “Sicario” (2015) – who powers it all with her indelible Poppins’ resolve, finding a whole new gear here the way Renee Zellweger and Catherine Zeta Jones did in “Chicago.” Her nanny’s aloof affect and strong nature endears from the get-go, and she slips into into the musical numbers seamlessly. If there was any question she could sing or dance, they’re put to rest.

There’s also the funny, silly magical excursions – remember Dick Van Dyke and those penguins back in ’64? – such as a bath time under-the-sea adventure that add to the film’s frothy, innocent lather. The cast has many little charms as well. “Prada” co-star Meryl Streep shows up in gypsy garb as Poppins’ Cousin Topsy, who can fix anything and lives in an upside-down emporium. There are also cameo turns from a spry Van Dyke and Angela Lansbury, who sells balloons with an uplifting sense of justice; Colin Firth rounds out the cast with suavity as a stately banker who may have a foot in some devious subprime doings.

The wonderful thing about this “Poppins” is its innate infectiousness. It’ll win over the cynical and charm the faithful. Dour and bleak times call for a nanny with a stiff upper lip and take-charge can-do fixes for everything from untidy bedrooms to dicey doings in the boardroom. She’s a marvel we could use now.

Post-review note: I attended the “Mary Poppins Returns” press screening with my 9-year-old daughter, Jane, who reported that Emily Blunt was fine, but no Julie Andrews. She also observed that this Poppins seemed less “responsible” than the 1964 nanny.