‘Bird Box’: Talent stumbles down blind path with thriller that leaves bit too much unseen 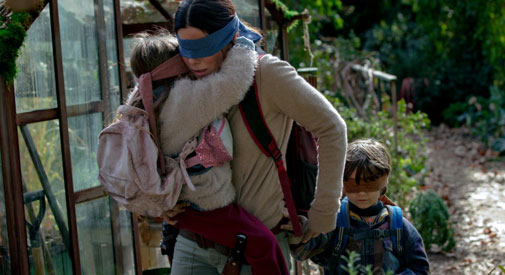 ‘Bird Box’: Talent stumbles down blind path with thriller that leaves bit too much unseen

Much will be made about the similarities between “Bird Box” and a “A Quiet Place,” which at once is understandable and also a complete crime. Sure, both take place in the wake of a near-future apocalyptic event – in “A Quiet Place,” sightless aliens who look like “Venom” extras are snapping up the last of humankind; in “Bird Box” it’s … well, you never really know what it is, and that’s the bulk of why the film never really takes hold, feeling ultimately like a cheap parlor trick. How can you have something wiping out humanity and not know what it is? An airborne virus, radioactive fallout or the sudden lack of oxygen – things we’re aware of, operating outside the purview of the eye, sure, but something that rattles forest shrubbery like a Bengal tiger, causing leaves to whip up, but is never seen? That’s not going to fly. 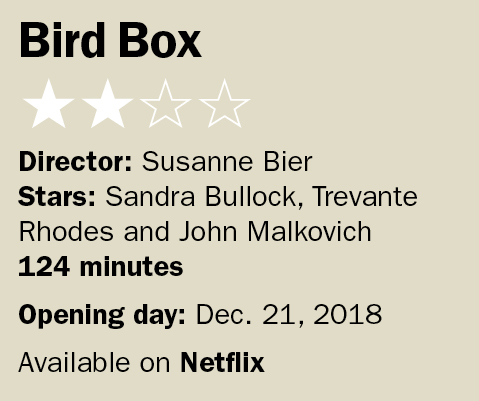 It’s actually floating that proves to be the final desperate measure as a mother and two children drift haplessly down a river, hoping for a new beginning yet never able to see around the bend. The other big surprise to “Bird Box” is the impressive throng of talent involved – and their inability to lift the project. The unexceptional script written by Eric Heisserer, a scribe who not too long ago adapted another slack sci-fi story (“Arrival”) into a sharp, thinking person’s flick, adheres hard to the flat source material by rocker-turned-novelist Josh Malerman. There’s plenty of gold in the mix too: Lead actress Sandra Bullock has an Academy Award to her credit, and director Susanne Bier also has Oscar pedigree from her 2010 Danish film “In a Better World.” What gives? For one, the producers probably held Heisserer to the best-selling book for fear they might disenfranchise their ready-made target audience. It doesn’t help that Bier shoots this in a way that feels more like a TV miniseries than a big-budget, two-hour, end-of-the-world burn.

The basic concept is that there’s something suddenly turning people mad out there, just by sight. Shortly after exposure, people either kill themselves or go on a mini mass murder spree before their own eventual end. Those that remain after the initial outbreak must wear blindfolds when outside and live in houses with all the windows blotted out. If you need supplies, you spray paint the windows of your car and use GPS to get to the Kwik-E-Mart. The problem there – more so with the story, because it too is never adequately explained – is that somehow a few people can look into the unknown terror and exist normally, though most seem to become maniacal followers of the unknown, like the infected lot in “Omega Man.”

By the third act Bullock’s mom is on that river with two young children, all blindfolded. The besieged house she leaves behind was the one source of genuine intrigue, as it held a small band of survivors with diverse personalities trying to make sense of it all and figuring out next steps as civilization and power grids crumble. Even that feels flat by comparison with “A Quiet Place” or even “Blindness” (2008). Bullock does a heck of a job to hold it all together, but in a film where even John Malkovich and the great Jacki Weaver are rendered largely inert (and also Sarah Paulson, Lil Rel Howery, Tom Hollander and B.D. Wong) maybe they all should have flown the coop before getting boxed into this flighty dystopian twaddle.

The film is available on Netflix. Originally it was screened for critics as if slated for a theatrical release, but given the result … Expect this to become more and more the trend, as Netflix (“Roma” and “The Ballad of Buster Scruggs” got micro theatrical releases before being made available for streaming) and Amazon become bigger players in the entertainment industry: If the film doesn’t look to bank big at the box office, send it to streaming and save distribution and marketing costs, while giving subscribers something to crow about.