‘Destroyer’: Limping through the grit of L.A., Kidman’s cop intends to see an ugly job done 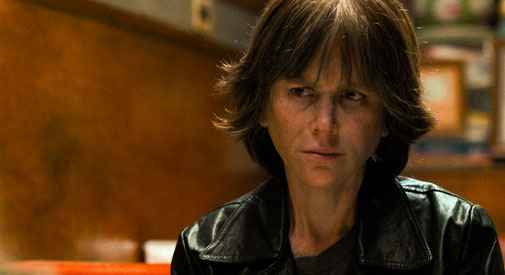 ‘Destroyer’: Limping through the grit of L.A., Kidman’s cop intends to see an ugly job done

“Destroyer” may be the bleakest cop drama to come around since Don Johnson puked up his guts as a booze-addled cop chasing after white supremacists in John Frankenheimer’s “Dead Bang” (1989). The boilerplate’s fairly similar, as we catch up with Nicole Kidman’s Erin Bell, a detective passed out in a dust-streaked car under an L.A. freeway. Gaunt and chalky, with hair matted and frayed, she looks like she’s been left in the desert to die. The radio squawks and Kidman’s trademark translucent blue eyes – encircled by bloodshot rims – open slowly. Erin can barely extricate herself from the vehicle, let alone stagger down a desolate throughway to a murder scene where she’s poorly received by the cops already on site. 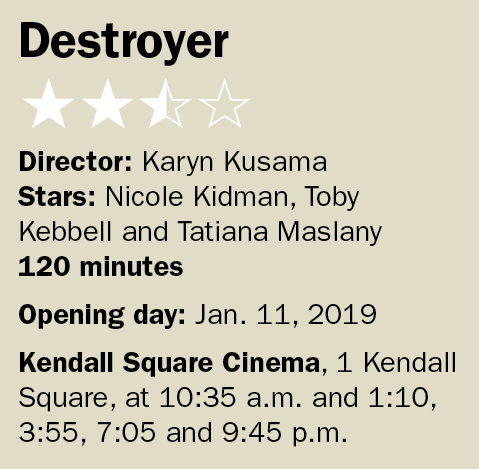 Erin’s jarring wobble is so disjointed and pronounced you wonder if she’s wickedly hungover or maybe had the shit kicked out of her. The truth is a good bit of both, and it’s a regular way of life for Erin, who’s hard to like and hard to avert your eyes from. How did we get here, how can such a shambling wreck remain on the force? The answers come in carefully meted strokes, mostly in flashbacks. Seventeen years earlier, as a rookie, Erin partnered with an FBI agent (Sebastian Stan, the Winter Soldier in the “Captain America” films) to go undercover to take down a criminal cult leader named Silas (Toby Kebbell, who’s weak tea compared with Charles Manson). She also has a teenage daughter (Jade Pettyjohn), and the two don’t get along whatsoever. Needless to say, back in the present Silas has resurfaced and Erin will do whatever it takes to bring him down, including giving a happy ending to an informant and hitting every dive watering hole the way other cops frequent doughnut shops.

Director Karyn Kusama (“Girlfight” and “Aeon Flux”) seems to be aiming for “gritty” in every frame. It feels heavy-handed from the get-go, but Kidman’s complex and nuanced performance and Theodore Shapiro’s edgy, haunting score score help sell it beyond its derivative trappings. It’s  amazing to drink in the tall, glamorous Kidman with such a dour, beaten-down countenance. Massive gobs of makeup must have been in play, because nowhere before has such natural comeliness been so sabotaged, aside from Charlize Theron playing serial killer Aileen Wuornos in “Monster” (2003). That turn earned Theron an Oscar, and Kidman’s nearly as on target here as jumps into the middle of a shootout with semiautomatics cocked, akin to Patty Hearst in her now infamous SLA pose, or pistol whips a Beverly Hills ne’er-do-well with ties to Silas. The film’s not so much a drama about a rogue cop as a showcase for Kidman’s range. It barely fires on that first chamber, but hits the mark on the latter.