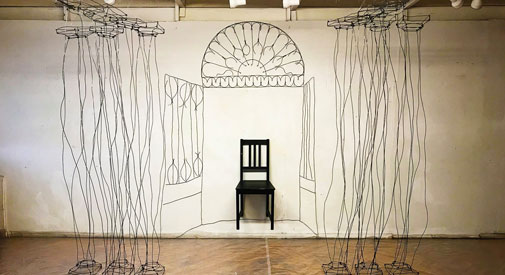 GrownUp StoryTime from 8 to 9:30 p.m. at the Somerville Media Center, 90 Union Square, Somerville. Free; there is a suggested donation of $15. Like storytime before bed, except this replaces a loved one with a weird stranger, and it’s being filmed before an audience. Short fact, fiction and other material written by the community is handed to performers to see what happens. Information is here.

David Lawson’s “Nazis and Me” one-person show from 7 to 9 p.m. in the back room of The Burren, 247 Elm St., Davis Square, Somerville. Tickets are $12 in advance, or $16 at the door. Lawson, an experienced performer of one-person shows, talks about about confronting hate in a time hateful Americans feel a strong sense of comfort: right now. Information is here.

The Flee Market from 6 to 10:30 p.m. at Warehouse XI, 11 Sanborn Court, Union Square, Somerville. Admission is $7 in advance, or $10 at the door. Why pay to get in to spend money on vendors such as Disorder + Farewell; Abhi Chandra + Sam Del Pilar; Gypsy Hill Supply; Peel Collective; Mavvro; Apparition Denim; and more? Partially to see performances by band Where’s Nasty? and others, but really because the sales benefit various charities. Information is here.

Bread & Bones dancing with live music from 7:30 to 11:30 p.m. at the Massachusetts Institute of Technology’s Building 50, also known as the Walker Memorial, 142 Memorial Drive. Free. Amy Kucharik & Tiger Moan perform a variety of tunes for dancing, with an emphasis on swing. The night starts with dance lessons at 7:30 p.m. before the live music at 9 p.m. Information is here.

Mayor’s Open Mic Night in honor of Black History Month from 6 to 8 p.m. at City Hall, 795 Massachusetts Ave., Central Square. Free. A second annual event, with all invited to take to the mic to express themselves. Physical art is also welcome to be displayed. Information is here.

Bruno Ganz “Wings of Desire” film tribute at 7 p.m. at The Brattle Theatre, 40 Brattle St., Harvard Square. General admission is $12. The film world lost a great actor this month when Ganz passed away. Most widely known for playing Hitler in the 2004 film “Downfall,” Ganz collaborated on several projects with director Wim Wenders, including “The American Friend” (1977), “Faraway, So Close!” (1993) and “Wings of Desire” (1987) – probably Ganz’s and Wenders’ crowning achievement. Ganz plays an angel overlooking West Berlin, observing a film crew and especially its female trapeze artist (Solveig Dommartin) with palpable pangs of want and a visceral melancholy. Want more Ganz? “American Friend,” (1977) with Dennis Hopper as Patricia Highsmith’s sociopath, Tom Ripley (a role played in other films by Matt Damon, Alain Delon and John Malkovich), is worth streaming on Amazon, Vudu or iTunes, as is “The Last Days of Chez Nous” (1993) on Google Play, Netflix or YouTube. Directed by the capable Gillian Armstrong, it shows a fractious household in Australia driven by shifting agendas. Information on the remastered “Wings of Desire” is here. (Contributed by Tom Meek.)

Kristen Roupenian reads from “You Know You Want This: ‘Cat Person’ and Other Stories” from 7 to 8:15 p.m. at Harvard Book Store, 1256 Massachusetts Ave., Harvard Square. Free. “Cat Person” became a phenomenon that sparked a national conversation, and Roupenian has followed up with 11 more stories that “range from uncomfortable to truly horrifying and are often – though not always – focused on the vicious contradictions of being female,” Kirkus Reviews said, calling the collection “unsettling, memorable and – maybe perversely – very, very fun.” With Meredith Goldstein, the “Love Letters” advice columnist for The Boston Globe and an author. Information is here.

“Situational: A Studio Research Residency” artists reception from 6 to 9 p.m. at The Nave Gallery, 155 Powderhouse Blvd., near Teele Square, Somerville. Free. Artists Kathy Desmond and Lauren O’Neal wrap up a residency that used a variety of materials and approaches to turn columns and gates inspired by Rome into dynamic spaces of exchange. Information is here.

Graffiti Alley Cypher from 8 to 11 p.m. in Graffiti Alley, across from Pearl Street on Massachusetts Avenue, Central Square. Free. Bridgeside Entertainment presents hip-hop artists performing organized recordings as well as going open-format for the public in Central Square’s most colorful and iconic location. Information is here.

Silent Disco from 8 to 11 p.m. at The Rockwell, 255 Elm St., Davis Square, Somerville. Tickets are $20 (with fees, $22.85) to this 21-plus event. Three DJs transmit music to wireless headphones, lit up in one of three colors so you can see what everyone’s dancing to: EDM/dance; top hits; or throwback tunes. Outside the headphones: a spectacle, and the weird shuffling noises of people otherwise silently dancing. Information is here.

Fry Off for charity from 1 to 3 p.m. at Kirkland Tap & Trotter, 425 Washington St., Somerville. General admission is $25, with free admission for accompanying kids 12 or under. Chefs including Mike Pagliarini from Benedetto and Giulia; Marc Sheehan from Loyal Nine; Kevin O’Donnell and Michael Lombardi from SRV; and Tony Maws from Craigie on Main and Kirkland Tap & Trotter go head to head to see who makes the perfect french fry, with proceeds going to the charity No Kid Hungry. The price of admission brings  all the fries you can eat and two drink tickets.  Information is here.

Peter Case performs from 4 to 6 p.m. at Atwood’s Tavern, 877 Cambridge St., East Cambridge. Tickets are $15 (with fees, $16.52). Case, founding member of the Nerves, leader of the Plimsouls (“A Million Miles Away”) and living argument for the Americana genre tours behind his widely praised “HWY 62” album. Information is here.

“The Stormy Night” screening with live musical accompaniment from 7 to 9 p.m. at the Harvard Film Archive at The Carpenter Center, 24 Quincy St., Harvard Square. General admission is $9, available by cash or check only in the lobby 45 minutes before a screening. Only around 20 films have survived from the hundreds made in China between 1921 and 1931; this silent from 1925 is a sophisticated, dramatic look at romantic longings and transgressions that unfolds with a mix of comedy and pathos. Information is here.

Somerville Songwriter Sessions from 7:30 to 10:30 p.m. at The Center for Arts at the Armory, 191 Highland Ave., Somerville. There is a suggested donation of $10. Singer-songwriters Jess Baggia, Kirsten Manville and Erinn Brown bring a variety of styles, leaning toward roots, blues and Americana. Information is here.

“Alta Trinita Beata”: Music and art of the Italian Trecento from 8 to 9:30 p.m. at the MIT Chapel, 50 Massachusetts Ave., Area II. There is a suggested donation of $20. The eccentric architecture of the chapel is a good match for the sound of Watertown’s Meravelha, doing songs from when the Middle Ages evolved into the Renaissance and using winds, percussion, harp, hurdy-gurdy and voice. Information is here.

Legends of Punk tribute from 8 p.m. to 1 a.m. from Club Bohemia at The Cantab Lounge, 738 Massachusetts Ave., Central Square. There’s a $10 cover for this 21-plus show. Charlie Don’t Surf does The Clash, No Future does The Sex Pistols and Warthog does The Ramones. Information is here.

Odds Bodkin’s “Beowulf: The Only One” from 5 to 8:30 p.m. (doors at 5 p.m. – be warned, you’re expected to be seated before the performance begins) at Grendel’s Den Restaurant & Bar, 89 Winthrop St., Harvard Square. Tickets are $15 (with fees, $17.55). Professional storyteller and musician Odds Bodkin accompanies himself musically while recounting how Beowulf sails to Denmark to kill the demon Grendel. The telling is rugged, bloody and true to the original poem, but comes with a bit of educational footnoting in a show of around 90 minutes with intermissions. Information is here. Update on Feb. 28, 2019: This show is sold out, but Grendel’s Den leaked news of the next show – “Fall of the Titans: The Original Game of Thrones,” coming March 24.

Pindrop Sessions: “bach & banjo” with Shirley Hunt and Curtis Eller’s American Circus from 7 to 10 p.m. at Aeronaut Brewing, 14 Tyler St., near Union Square, Somerville. General admission is $20 (with fees, $22.85). A unique mix of music with internationally respected baroque cellist and violist da gamba Hunt (pictured), who brings fierce imagination and integrity to the music of the Renaissance, Baroque and contemporary eras; and banjo player, songwriter and rock ’n’ roll singer Eller, with full band, who brings dynamic, highly physical stage performances and an extensive catalog of curious phonographic recordings, all largely circling a dreamlike vision of American history where all points in time have collapsed into one.  Information is here.