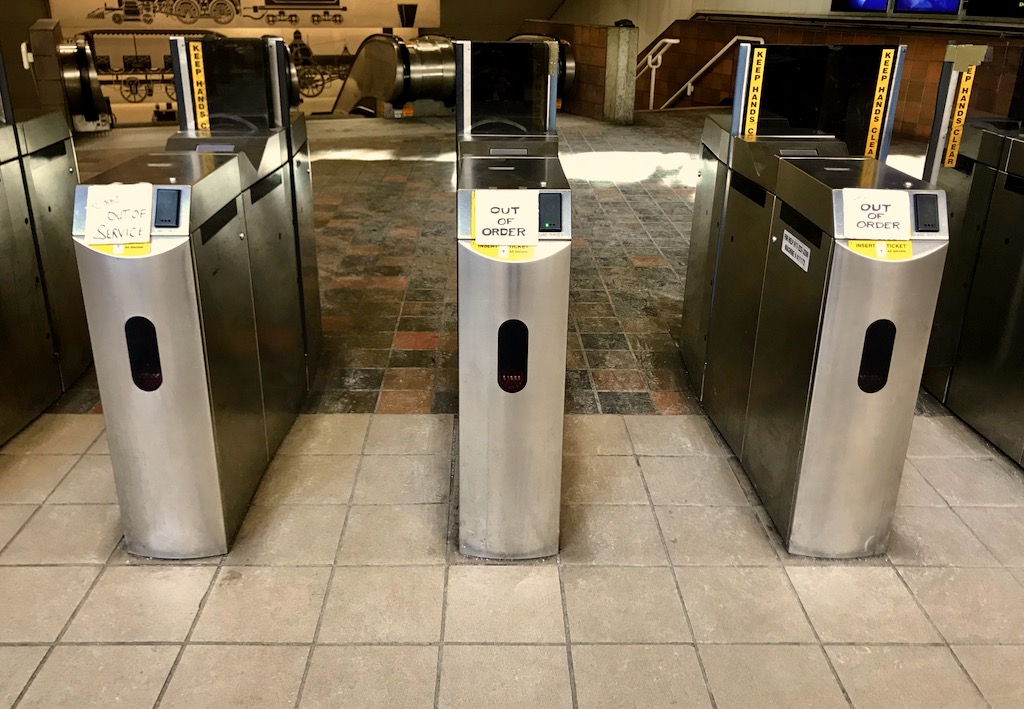 Four fare gates at the Porter Square T station are out of order Thursday, including one to the right that isn’t yet marked by a sign. (Photo: Marc Levy)

Cambridge’s mass transit riders should really be looking forward to the year 2023.

With new red line cars coming, technology being rolled out and track being rebuilt, not to mention the possibility of more buses running faster, there was plenty of official optimism on display at an MBTA community forum held Tuesday that the work would come together in around 2023 for a truly pleasing experience.

All the changes presented science fair-style at the high school – meaning people walked around from station to station to look at placards and talk to presenters – will add up within the next few years to waits of only three minutes between trains, down from 4.5 on a good day, “which will get us a 50 percent increase in capacity on the red line,” MBTA deputy general manager Jeffrey D. Gonneville said. “Really, really exciting.” 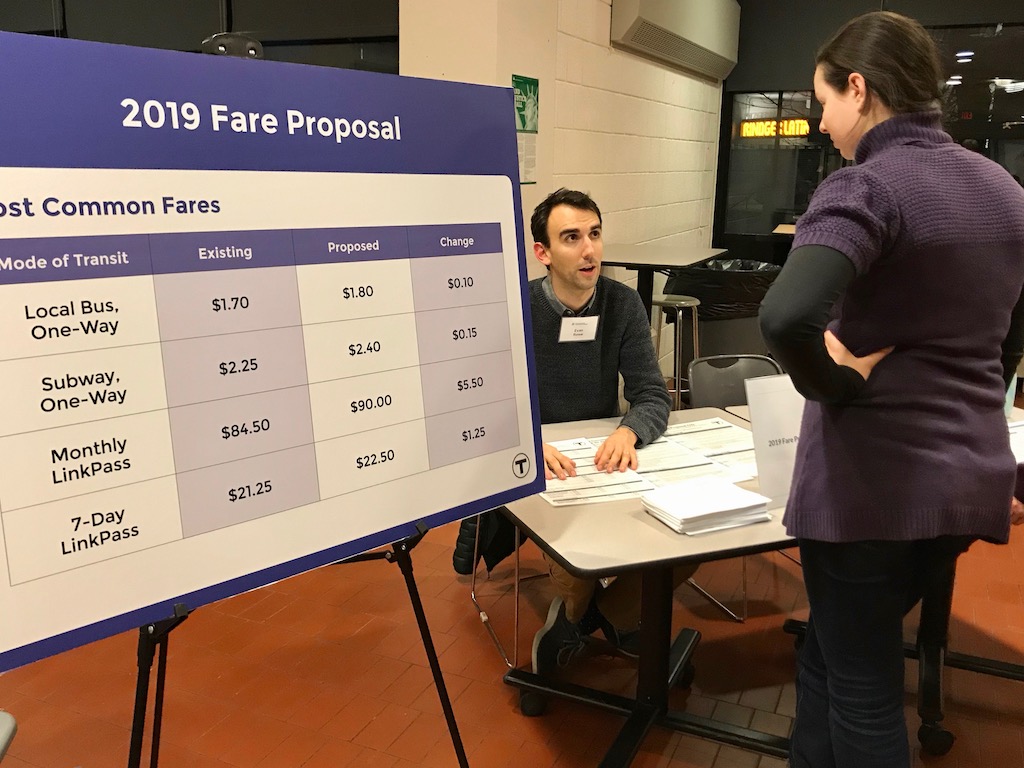 The red line, along with other parts of aging Massachusetts Bay Transit Authority infrastructure, is being rebuilt almost entirely, which is one reason why the T’s late-night routes relies on buses rather than trains, Gonneville explained: “Slow, incremental improvements” on tracks and power lines are underway, but limited to 2 to 5 a.m. when trains aren’t running; longer T hours would just slow the work further. But more reliable rail plus new, more advanced red line cars (the first should be spotted in the wild this year) should mean fewer breakdowns and more speed.

Part of the upgrades is for automation, which means that by 2023-24 trains will more or less drive themselves, “and all the porter person will really be required to do is open and close the doors” at a station, Gonneville said.

It will also be faster for people to get into a station and board a train, thanks to a $700 million fare system called AFC2, said David Perry, an MBTA project manager. Don’t bother letting the price tag freak you out – the expense was voted through by state transportation officials in 2015 and disbursements began two years ago, paid for by state bonds for a 13-year period that starts with three years of implementation. The new fare system is expected to be in limited use in 2020 and “really rolling in 2021,” Perry said, ideally decreasing fare evasion and producing more money to “reinvest for user experience.”

Skeptics might say that the real user experience is in on-time trains that don’t break down, which might make it seem like AFC2 is a $700 million doorbell on a house that’s falling apart. “I would not look at this as just a fancy doorbell. We’re doing those other projects,” Perry argued, and the new system is expected to be faster and more flexible, and to save money on fare gates that are difficult to maintain. (Indeed, at the Porter Square station this week were three gates in a row with signs declaring them out of order. A fourth broken gate was to the right, so far lacking a sign.)

Ultimately to be dubbed “Charlie” as the heir of the current Charlie Card, the system will work off smartphones or a credit card, which Perry called an improvement because it can be “very difficult to get Charlie Cards.”

The shortcomings of the T, including the difficulty of getting the cards that let you on and the mechanical frustrations once you’re aboard, has made a 6 percent increase in fares a flashpoint for riders and their elected representatives. Gonneville understands fare increases make riders “uncomfortable” but called the current proposal a “relatively moderate” rise that would be reinvested in the system.

But with the system portrayed as being at something of a breaking point and the board of directors as having limited options, it was hard to see the changes as anything other than a train running. It may take three red lines trains to come and go at rush hour before one can be boarded, for instance, and one placard at the forum noted that “our bus system runs at full capacity during rush hour [and] there are no extra bus drivers, so we can’t currently add service without cutting it somewhere else.”

The 47 proposed changes to bus routes under the “Better Bus Project,” though, will make it possible to soon add rush hour buses and drivers, and even get more buses running off-peak, Gonneville said – around the time the red line changes are in place below ground and there’s a potential 50 percent increase in capacity … a mere five years from now.