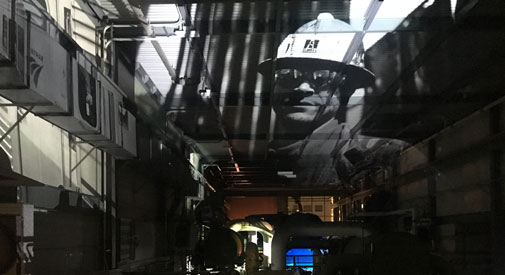 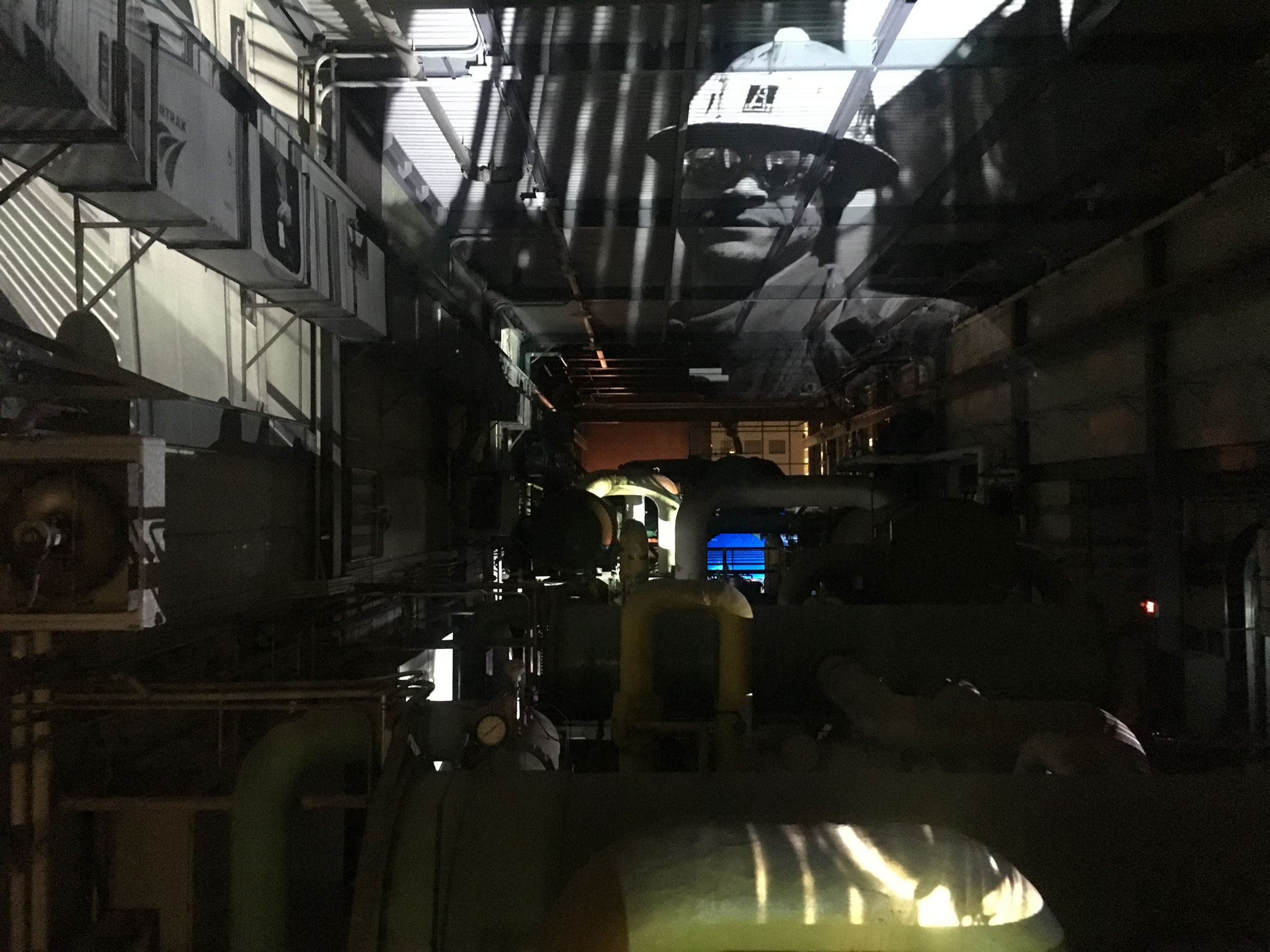 From the oil rigs to the “man-camps” where workers live, artist Valery Lyman’s two-day power plant pop-up “Breaking Ground” looks unflinchingly at the landscape of American industry. In Lyman’s moving installation, centuries of boom and bust give way to new boomtowns and the latest technology; but while the infrastructure of extraction has changed, the optimism, hard labor, risk and loneliness are a constant over more than 200 years of the American experience.

Photographs from Lyman’s work have been installed around the country and published by The Guardian, the Los Angeles Times and The Christian Science Monitor in the past few years. The installation this week at the Massachusetts Institute of Technology incorporates those images, along with audio from Lyman’s exploration of North Dakota from 2013 to 2016 – projected directly onto machinery throughout MIT’s Central Utilities Plant in Cambridge, making a singular art experience out of a plant providing electricity, steam heat and chilled water to more than 100 campus buildings.

Lyman, and then her Massachusetts College of Art student assistants, talked about what the exhibit means and how it came together. The conversations have been edited and condensed for publication. 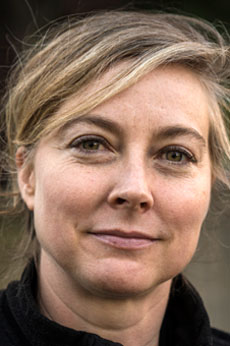 You spent four years photographing and recording audio in the Bakken region of North Dakota, documenting the rise of the oil industry there and the large migration that went along with it. What relation do these images and sounds bear to the MIT Central Utilities Plant, where you will be projecting and installing the work?

Projecting these photographs directly onto the machinery throughout this operational plant gives the public a chance to consider the human side of energy extraction. Who are the men and women working at the other end? What are their stories, their dreams? What’s the texture of their daily existence? Where do they come from, and what do they leave behind to be able to do this work?

It brings our attention to aspects of energy production that we might not realize or think about on a daily basis.

Right. I would bet a lot of people don’t know that this massive industrial plant exists right in the heart of Cambridge. I think people don’t really understand how heat gets to their house. Or gas to the gas station. And that’s part of what this project is about – making this infrastructural landscape visible. Photographing in North Dakota was one way of doing this, and opening a local utilities plant to the public here in Cambridge is another.

I am not doing this as a political act – because I think it’s “important” or anything like that. I am doing it simply because I find these infrastructural structures to be incredibly beautiful. To me, they are great works of art. The imagination that manifests them is extraordinary. It’s beyond my personal imagination – something I would neither dream nor build – and perhaps that’s why I’m so fascinated by it. I suppose it’s representative of a collective imagination, a reflection of our collective psyche. 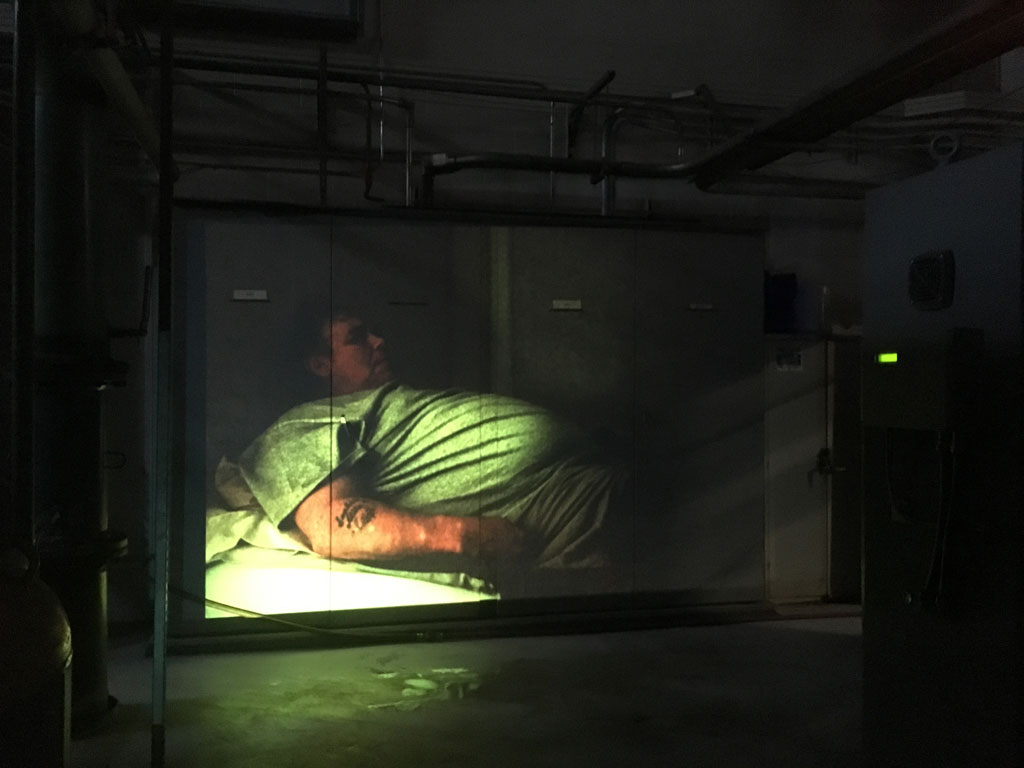 A photograph of a worker in his North Dakota room from 2015 is projected onto worker lockers in the Chiller Hall at MIT’s Central Utilities Plant in Cambridge. (Photo: Valery Lyman)

When I first saw fracking operations in North Dakota, it looked like surrealism in infrastructure. The visual power of it was stunning. No one really knows what fracking looks like because it’s so politically sensitive that they mostly keep photographers out. If you looked up fracking on Google right now you’d see a picture of something else – an oil drilling derrick, something that’s been going on long enough that people have seen images of it. In fracking, all these massive tubes look like giant octopi or sea creatures with men walking among them like weeds, tending them. It’s biblical. It’s very moving. Leave value judgements off for a moment. Fracking is part of our world. Why shouldn’t we see what it looks like?

You’re shedding light on the interior and exterior landscapes of energy production. There’s a lot to think about.

These are the landscapes created and inhabited by working people.

We know well what certain kinds of work look like – celebrate them, even. But energy workers are a big part of our economy. “Breaking Ground” also shows the sex workers that are part of the economic ecology in North Dakota, and part of building probably every major industry in this country.

To learn more about the people in the oil fields of North Dakota, you’ll have to come to the exhibit to see them for yourself, and hear them in their own voices. I believe in as direct an encounter as possible. 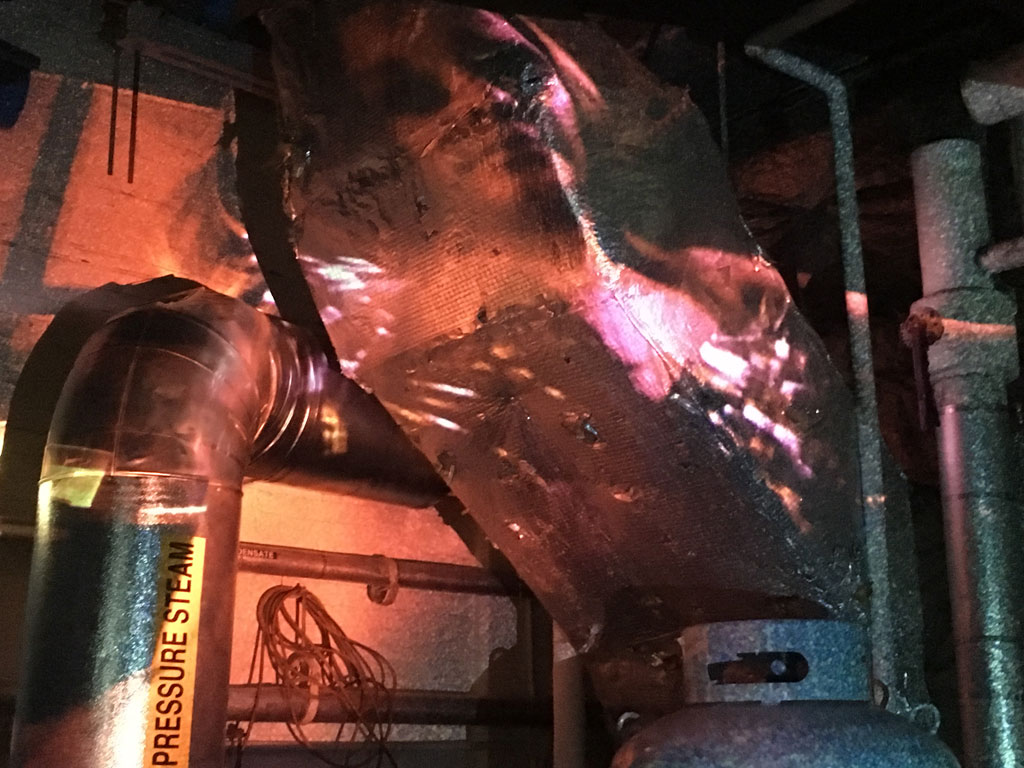 A 2015 photograph of a sex worker in North Dakota is projected onto insulation and piping at the Central Utilities Plant. (Photo: Valery Lyman)

Can you give us a little preview? How do all the pieces come together – the otherworldly mechanical infrastructure, the people, workers, families, scientists, your photographs and recordings?

The piece incorporates the plant’s infrastructure by projecting images directly onto the machinery throughout one of the large halls where air conditioning is produced. The viewer is invited to enter and wander. There are 12 projectors and four audio pieces spread throughout, and people should take it in at their own pace.

As the documentary images are texturally altered, stretched and re-formed across various structures and surfaces, we see the interrelation between human, machine and landscape – how we form and become one another over time. The plant at MIT and even those who work there now are part of that.

You’ve installed this project at a number of sites across the country – in Boston, Tulsa, Buffalo … Has there been anything unique about doing it here in Cambridge?

I’ve just loved working at the plant. These union guys have been so wonderful and generous to work alongside. I think some of them are going to bring their families – who’ve never seen where they work – to the exhibit this weekend. I’m just really happy that the public will get a chance to see the inside of this extraordinary building, and to be a conduit for that. It’s amazing that MIT and the plant itself agreed to do it. They’ve never done anything like this before. 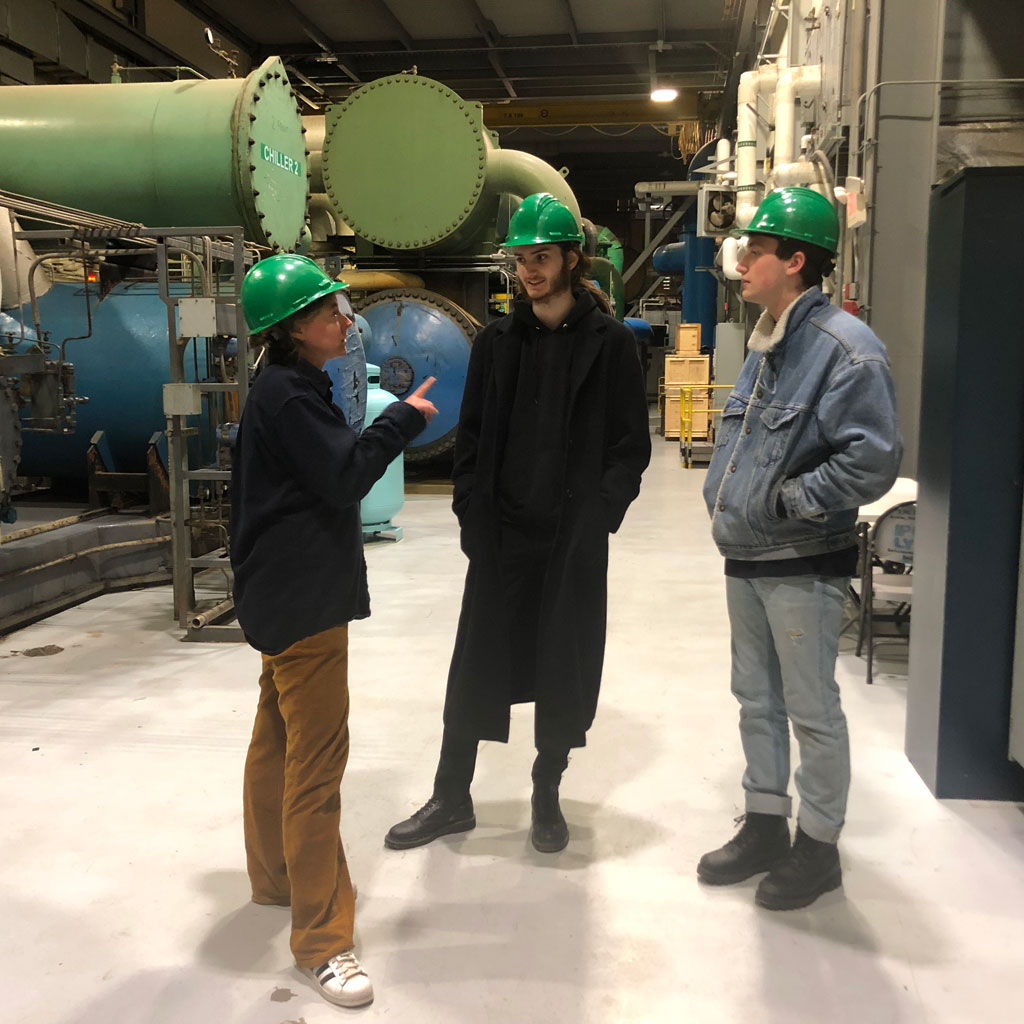 Why should people come check out “Breaking Ground”?

Jack Kineke: To see art in ways I didn’t know were possible.

Hollie Sullivan: Yeah, being able to see this space is amazing, and getting to see these images projected in this way is doubly fantastic.

Allis Oldakowski: The importance of the stories being highlighted. The collection of faces and voices from North Dakota shouldn’t be forgotten. And in combination with the powerful industrial landscape of the plant, I think it will be hard to forget.

How would you describe the piece? What might visitors expect?

JK: I would describe the piece as contemplative. The way the art is displayed creates unique associations which make me question my own perception and the way I see things. Visitors should expect to see a variety of views and ways of life. 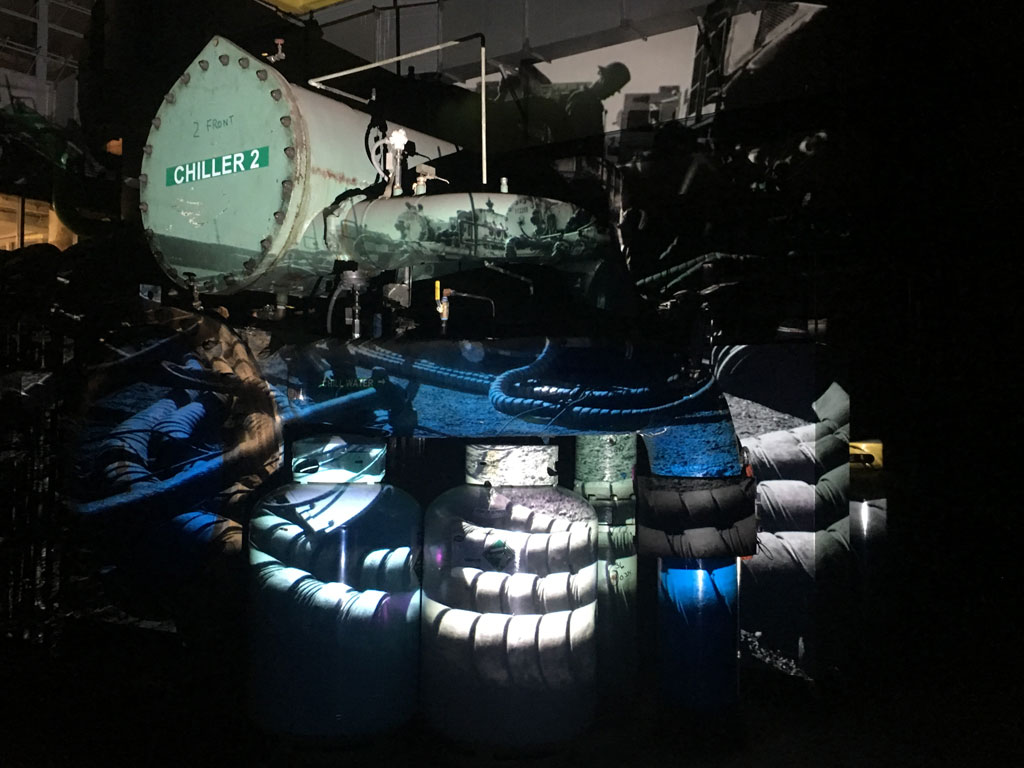 An image of fracking pipes is projected in “Breaking Ground” at the Central Utilities Plant. (Photo: Valery Lyman)

HS: It is surreal to walk around in a working factory looking at these industrial photographs while hearing audio of real conversations.

AO: Yeah, the documentary aspect is extremely moving. I think the experience will be different for each visitor.

HS: A lot of trying things out and making adjustments.

JK: Super engaging and enlightening. Valery is dedicated to making her exhibitions the best they can be, and this sparked a dedication in all of us to not settle until everything felt right together.

AO: Honestly, I didn’t think the installation process would be as heavy work as it is! The brain power needed to critically think about the best position and carefully arrange each projector is astounding. It is a sure test of artistic and compositional ability.

Valery Lyman’s “Breaking Ground” can be seen from 6 to 8:30 p.m. Friday and Saturday at the Massachusetts Institute of Technology’s Building 42, also known as the “Chiller Hall” Central Utilities Plant, 59 Vassar St., Area II.