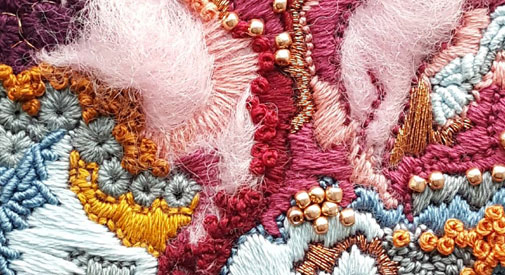 “Consent” participatory installation and opening reception from 7 to 10 p.m. at Spaceus, 11 First St., East Cambridge. Artist Marika Whitaker uses map pins and thread to create text on the walls of the “Porcelain Gallery,” highlighting how the bathroom serves as a place of exchange for everything from messages and bacteria to sex by inviting contributors to thread the text, write on the walls and engage in exchanges. Information is here.

Joe Keane Featured at Story Space from 6:45 to 9 p.m. at Havurat Shalom, 113 College Ave., Powder House Square, Somerville. There is a $5 requested donation. Celtic yarn spinner Keane tells a collection of Irish stories and his own work. Information is here.

21st Boston Underground Film Festival takes up a five-day residency at The Brattle Theatre, 40 Brattle St., Harvard Square. With titles such as “Heart+Knife,” “Clickbait” (by former locals Sophia Cacciola and Michael J. Epstein) and “Mope” as well as the “The Saturday Morning All-You-Can-Eat-Cereal Cartoon Party,” the BUFF certainly lives up to its underground tag. The fest’s showcase film, “Hail Satan?” comes from Billerica-raised documentary filmmaker Penny Lane, who follows the rise of a satanic cult. BUFF has long been a cultivator for local and novice filmmakers, and fills an “after dark” viewing niche. As cited by the Boston Society of Film Critics this year, BUFF was recognized for “scouring the dark alleys of the cinematic world for transgressive gems, and bringing home to an appreciative audience the best in film and video high weirdness.” (Contributed by Tom Meek) Information is here.

“Sightlines” opening reception from 6 to 8 p.m. at the VanDernoot gallery in Lesley University’s Lunder Hall, 1815 Massachusetts Ave., Porter Square. The photographs of Bonnell Robinson explore the remaining evidence of conflict from War War I, while Richard Zauft’s photos seek to capture unexpected moments that emerge from an idea. Information is here.

“Burning” play from 8 to 10 p.m. (and repeating Friday and Saturday) at Unity Somerville, 6 William St., just off College Avenue near Davis Square, Somerville. General admission is $20 (with fees, $21.69). The Theatre@First company produces a contemporary dramatic reimagining of “Cyrano de Bergerac” by Ginger Lazarus in which a former Army sergeant kicked out under “Don’t Ask, Don’t Tell” rules takes on the world as a blogger, blowing the whistle on sexual harassment within the Army and going toe-to-toe with her former commander. She secretly adores her friend Rose, who in turn has her eye on Cole, an inarticulate infantryman. Cy signs on to reluctantly ghostwrite Cole’s courtship of Rose, but lets her own fantasy take priority over the reality of the situation. Directed by Andrea Humez. Information is here.

Tufts Youth Philharmonic Benefit Concert from 6 to 8 p.m. at the Granoff Music Center at Tufts University, 20 Talbot Ave., Somerville. There is a suggested Donation of $10 per person or $25 per family. Information is here.

“Stitchers” exhibition reception from 7 to 9 p.m. at Gallery 263, 263 Pearl St., Cambridgeport. Free. This exhibition features six women artists from around the world who met on Instagram, going on to incorporate multimedia elements into their embroidery while depicting deeply personal narratives, potentially challenging the notion of embroidery as a pastime craft. Information is here.

“Her Sylvan Ascent” dance performance from 8 to 9 p.m. (and repeating Saturday) at The Dance Complex, 536 Massachusetts Ave., Central Square. Jody Weber brings back her dance work, inspired partly by Peter Wohlleben’s “The Hidden Life of Trees” and last year performed outdoors, that encourages viewers to look at imbalances within ourselves and the world now manifesting in climate crises. The dance draws on imagery from the Women’s March and strong feminine archetypes. Information is here.

“Burning” play from 8 to 10 p.m. (and repeating Saturday) at Unity Somerville, 6 William St., just off College Avenue near Davis Square, Somerville. General admission is $20 (with fees, $21.69).  Information is here.

New Zineland 2019 zine fest from 11 a.m. to 5 p.m. (and continuing Sunday) at the Massasoit Elks Lodge, 55 Bishop Allen Drive, Central Square. Free. More than 60 smalls presses, distributors, artists, writers and photographers sling their self-published works from comics to fanzines, artwork to autobiography, and everything in between on two floors. Information is here.

The sixth annual Empty Bowls Project at 11:30 a.m. and 1:30 p.m. Saturday at Puritan & Co., 1166 Cambridge St., near Inman Square. Tickets are $40. Comfort food cooked by 1369 Coffeehouse, Bisq, Trina’s Starlight Lounge, Darwin’s Ltd., The Druid, City Girl Cafe, Puritan & Co., Lord Hobo, Atwood’s Tavern, Loyal Nine, Highland Fried, Sofra and others promises to warm the soul as well as the belly – proceeds go to On the Rise, which will keep homeless women in Cambridge literally warm. What makes the meal unique is that after eating, diners take home the handmade bowls they ate from, donated by potters such as those at the MIT Student Art Association, Feet of Clay Studio and Indigo Fire Studio. There’s a second seating once again this year. Information is here.

“The Boy and the Beast” film from 3 to 5 p.m. at the Harvard Film Archive at The Carpenter Center, 24 Quincy St., Harvard Square. Tickets are $5, or free with a current Cambridge Public Library card, and are available starting at 2:15 p.m. outside the screening room. A grumpy warrior beast who lacks social skills but desperately needs an apprentice takes in the boy Kyuta, and the two develop a father-son relationship that gets put to the test in a supernatural adventure. Recommended for ages 12 and older. Information is here.

DIYDS 2019 Film Festival Premier Screening from 6:30 to 10:30 p.m. at the Massachusetts Institute of Technology’s Media Lab, 75 Amherst St., in Area II near Kendall Square. General admission is $14. The “Do It Your Damn Self!!” National Youth Film Festival – founded in 1996 by six Cambridge teens who felt misrepresented in media – is the longest-running youth-produced festival in the country, drawing over 800 youth and adults to public screenings every year. Information is here.

Past Forward: an Evening of Japanese Traditional Arts from 7 to 10 p.m. at José Mateo Ballet Theatre, 400 Harvard St., Harvard Square. Tickets are $35. The mystique of Japan is represented through dance and music and martial and visual arts, including kabuki dance, the sounds of koto and shakuhachi and powerful taiko drumming. The artists emerge to talk during intermission; a gallery displays kimono, aizome indigo dye art and ikebana flower arrangements (and you can try on the yukata); and there are Japanese foods and drinks to enjoy. Information is here.

Patches and Pins Punk Rock Improv from 11 p.m. to 12:15 a.m. at ImprovBoston, 40 Prospect St., Central Square. Tickets are $12. A fast and Loud punk rock improv musical, making up funny songs on the spot with the help of a band. Information is here.

“Her Sylvan Ascent” dance performance from 8 to 9 p.m. (and repeating Saturday) at The Dance Complex, 536 Massachusetts Ave., Central Square. Information is here.

“Conflict Zone: A Play of Mental Health and Other Wars” at 2:30 p.m. and 7 p.m. at Outpost 186, 186.5 Hampshire St., Inman Square. General admission is $15 at the door. Israeli-American musician and artist Leahy Ardon brings back her one-hour solo show about recovery from an eating disorder, touching on wars internal and external and promising to leave the audience “touched and shaken.” Information is here.

Odds Bodkin’s “Fall of the Titans: The Original Game of Thrones” from 5 to 8 p.m. (doors at 5 p.m. – be warned, you’re expected to be seated before the performance begins) at Grendel’s Den Restaurant & Bar, 89 Winthrop St., Harvard Square. Tickets are $15 (with fees, $17.55). Professional storyteller and musician Odds Bodkin accompanies himself musically while looking at the Titans of Greek mythology – starting with Gaia, who gives birth eventually to hideous monsters who threaten her more beautiful god children. Information is here.