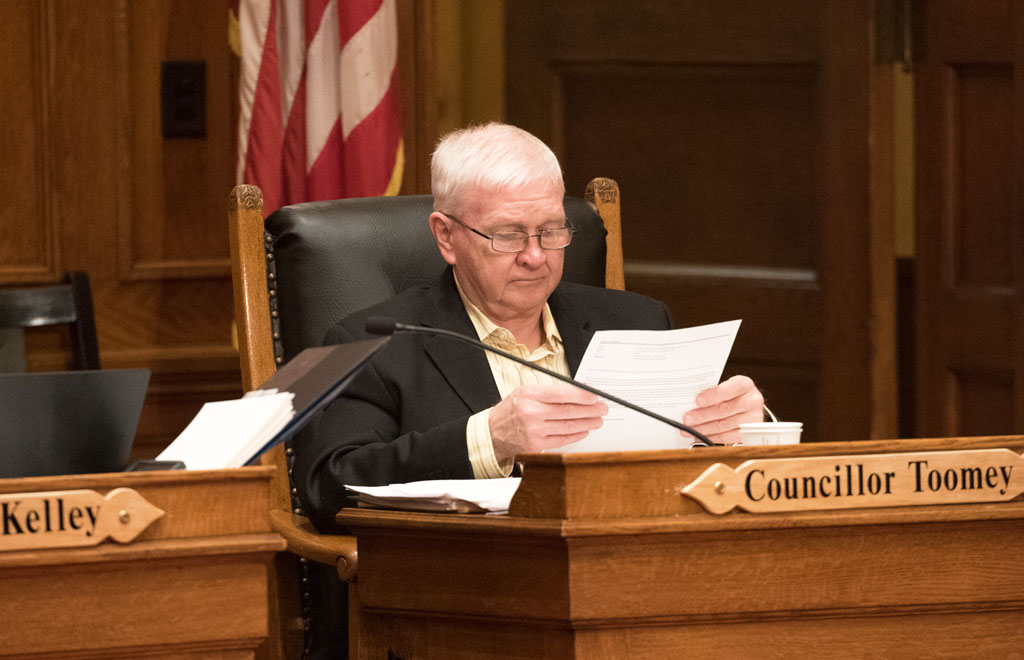 While never shy about using his “charter right” to bump a debate or vote to the next meeting, longtime city councillor Tim Toomey seemed to take everyone by surprise by doing it to all five items on the city manager’s agenda Monday.

City Manager Louis A. DePasquale appeared in the doorway behind Toomey in Sullivan Chamber at City Hall just at the moment councillors would be selecting items from the agenda to discuss – but Toomey seized that moment to instead charter right the whole thing, and DePasquale left. His total time in the room couldn’t have been more than a couple of seconds.

Toomey didn’t explain his action at the time, told journalist John Hawkinson during the meeting only that the charter right was “my prerogative under the council rules” and was no more forthcoming after the roughly two-hour meeting.

“It wasn’t to shorten the meeting, it’s just my prerogative,” he repeated, saying there was plenty of precedent for a mass charter-righting of city manager items. “Not only from me, but from a lot of people.”

Lee Gianetti, director of communications and community relations for the city and spokesman for DePasquale, left the meeting amused but reporting himself in the dark about reasons for the action – if appreciating the chance to get more work done before Monday office hours ended at 8 p.m.

The city manager’s agenda for the night included items transmitting the results of the biannual City of Cambridge Resident Telephone Survey; a request for $3 million for snow-related expenses (including $400,000 just for road repairs); a report on replacing failed LED streetlights; and discussion of “efforts to educate cyclists about riding safety and sharing the road especially at intersections.”