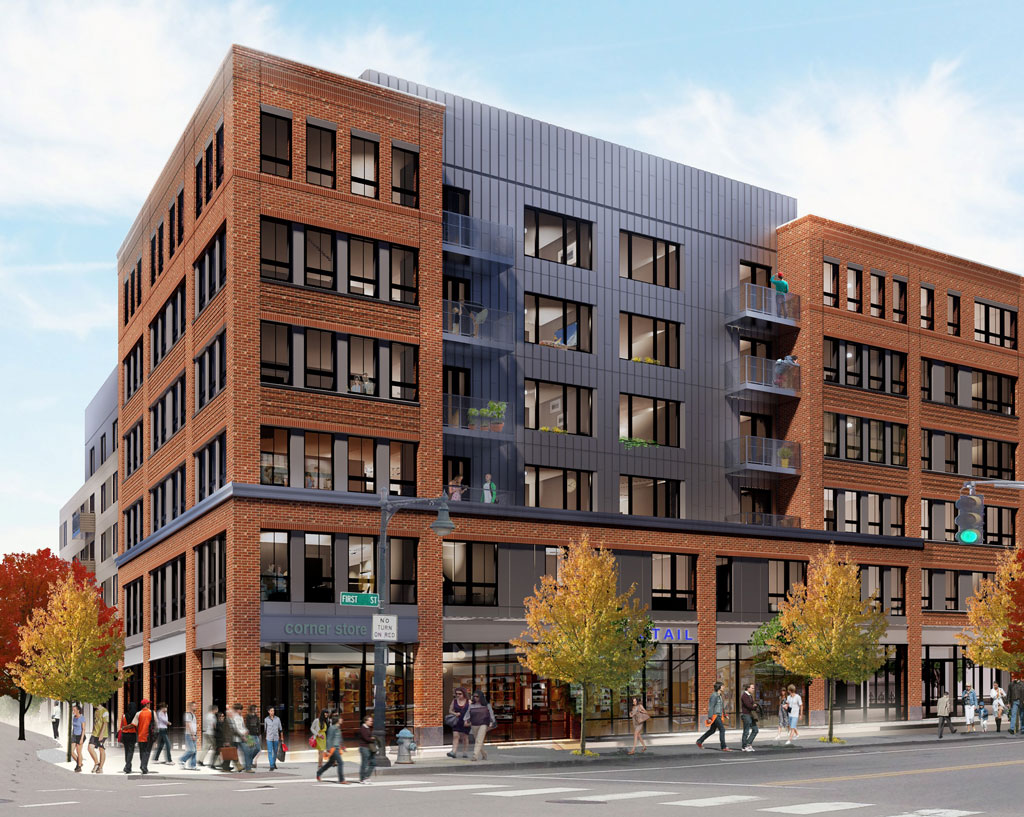 The Kendall East apartment complex will include space at 99-119 First St, once a Petco with a parking lot. (Image: Perkins Eastman)

The developer Urban Spaces began tearing down its own former headquarters Monday to make room for its latest project along First Street in East Cambridge – a 136-unit, two-building apartment complex with 14,800 square feet of retail at its base.

The project, called Kendall East, is set to begin construction in April and be ready for renters in 2020 on parcels at 99-119 First St., 18 Hurley St. and 29 Charles St. The First Street location was a Petco and its parking lot, but now will be pet-friendly apartments, according to Urban Spaces. The two buildings will share a two-level underground garage with 142 parking and 159 bicycle spaces beneath a half-acre green space; another 23 surface parking spaces will be used for whatever retail moves in.

There will be four-story and six-story buildings in the complex, a mix of studios and apartments with one, two and three bedrooms, the company said.

Sixteen of the 136 units will be designated as affordable, and a press release Monday wasn’t shy about labeling the housing as otherwise luxury, referring to “supply-constrained East Cambridge” and nodding to a January report by Zumper that called Cambridge “the most expensive Massachusetts city to rent in, affirming the high demand.”

“With office and lab space in Kendall Square and the First Street Corridor nearly at full occupancy and Cambridge Crossing signing leases with Sanofi and Phillips for over 1 million square feet, the demand for luxury apartments in East Cambridge has never been greater,” said Paul Ognibene, chief executive of Urban Spaces.

He unwittingly flipped concerns of city councillors Monday, when vice mayor Jan Devereux pointed to the coming of Sanofi and predictable rise in housing demand from arriving employees as cause to dramatically hike city spending on affordable housing. The council discussion Monday included the possibility of putting in $20 million annually toward the creation of affordable housing over the next three to five years. 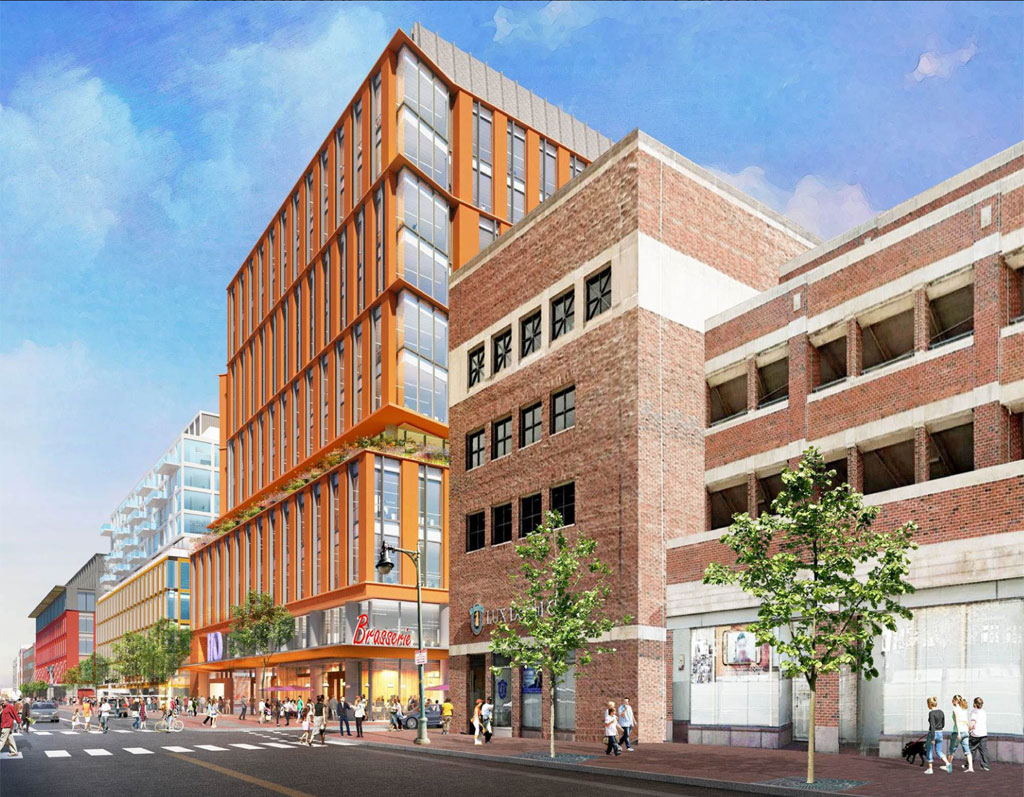 A proposed revamp of CambridgeSide mall properties would include a variety of uses and architectural styles. (Image: Elkus Manfredi)

Kendall East is across from the CambridgeSide mall, which plans its own dramatic revamp to reposition itself as retail continues to evolve in the Internet age.

Despite consistent efforts to attract new tenants, including a recent multimillion-dollar interior renovation and an application to turn the third floor of shops into leased office spaces, “the long-term success of CambridgeSide as a mixed-use center requires a more comprehensive redevelopment,” mall owner trustee Stephen Karp has said. That would mean hanging on to some retail but adding 600,000 square feet of mixed uses, including residential; trustees are also talking about more art, a seasonal farmers market and a contribution to the city’s struggling efforts to keep and increase tree canopy.

Heights would range between 85 and 185 feet high among three midrise buildings and one tower that would replace the Best Buy, Sears and Macy’s locations and the mall’s First Street garage with four mixed-use building, along with ground-floor retail. Residences could make up as much as 20 percent of the project.

The Planning Board gave generally positive feedback at a hearing March 19, though members had concerns about the proposed height of a redesigned CambridgeSide and the appropriateness of it hosting lab space, according to social media coverage by journalist John Hawkinson.

It’s the dramatic changes along the corridor due from Urban Spaces and CambridgeSide that contributed to widespread neighborhood opposition to a plan to lease out about 38 percent of the parking spaces in the city-owned First Street Garage for the next three decades, along with 9,000 square feet of long-closed ground floor area meant to be retail. Those parking spaces are used by residents, said Chuck Hinds, president of the East Cambridge Planning Team, and may be indispensable if CambridgeSide follows through on a plan to eliminate 800 spaces from its own garage.

Hinds’ group called for a halt to the city’s plan so a study could catch up with all the changes. “First Street is the only part of the neighborhood that has been excluded from previous planning studies,” Hinds said in October. “We had fought in support of Cambridge changing the planning process from isolated considerations of zoning impact which resulted in the [citywide] Envision Cambridge process. There is no reason that this good planning sense should not apply to First Street.”