Colonialism, tech and ‘civilization’ under lens as Technoskeptic talks about ‘Mosquito Coast’ 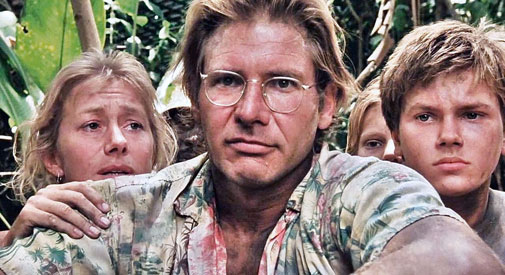 Colonialism, tech and ‘civilization’ under lens as Technoskeptic talks about ‘Mosquito Coast’

The Technoskeptic Goes to the Movies series returns May 9 with “The Mosquito Coast,” a 1986 film after a novel by Paul Theroux in which inventor Allie Fox – a sweaty but stern (and occasionally manic) Harrison Ford – moves his family to the jungles of Central America to rebuild civilization according to his ideals. His increasingly stressed family includes Helen Mirren and a young River Phoenix.

The film is little remembered despite being directed by Peter Weir, just off “Witness” (which also starred Ford), and just before his “Dead Poets Society.” Ford himself was riding the hottest of streaks after numerous installments of “Star Wars” and the Indiana Jones franchise, not to mention “Blade Runner.”

Its status as a forgotten film is “one of the reasons I thought it would be an interesting choice,” said Mo Lotman, founder and publisher of The Technoskeptic – which, as suggested by its name, takes a critical look at the impact of technology on society. “It’s a slower film, and given the choice of casting a known action star as the lead, it could explain why it didn’t get as much attention then.”

“Actually the themes are more resonant now than they were then, because people were in the middle of their Wall Street coke-infused partying,” he said. “The [societal flaws] the protagonist is noticing are even worse, and the consciousness around environmental issues and inequality is much greater now.”

“‘Civilization is ice’ is a quote from the film – meant literally, although with obvious metaphoric connotations – and I find myself thinking about that every so often,” Lotman said.

The Brattle Theatre screening will be followed by discussion of some suitably head topics: the culture and philosophy of technology, and the role of colonialism and labor in creating civilization as we think we want it. Participants will include Salem State professor Aviva Chomsky (an expert in Latin American and labor history) and the Massachusetts Institute of Technology’s Deborah Fitzgerald (an expert in the history of technology), as well as Lotman.

The screening takes place at 7 p.m. May 9 at The Brattle Theatre, 40 Brattle St., Harvard Square. General admission is $13.