‘Long Shot’: She’s testing a run for president, he’s that strange bedfellow you hear about 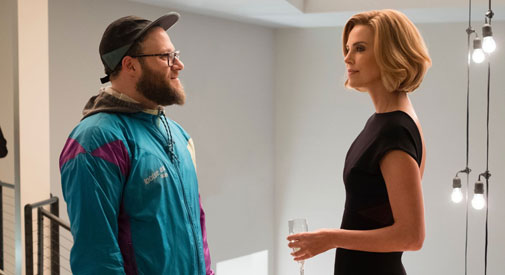 ‘Long Shot’: She’s testing a run for president, he’s that strange bedfellow you hear about

Without Charlize Theron, “Long Shot” would likely have no shot. The capable and statuesque actress has time and time again demonstrated her versatility, bouncing seamlessly from action (“Atomic Blonde” and “Mad Max: Fury Road”) to comedy (“Young Adult”) and of course, dark drama, namely playing serial killer Aileen Wuornos in “Monster” (2003), for which she won Oscar gold. Here she’s in rom-com mode as Secretary of State Charlotte Field looking to push a green initiative worldwide and launch a run for the Oval Office. 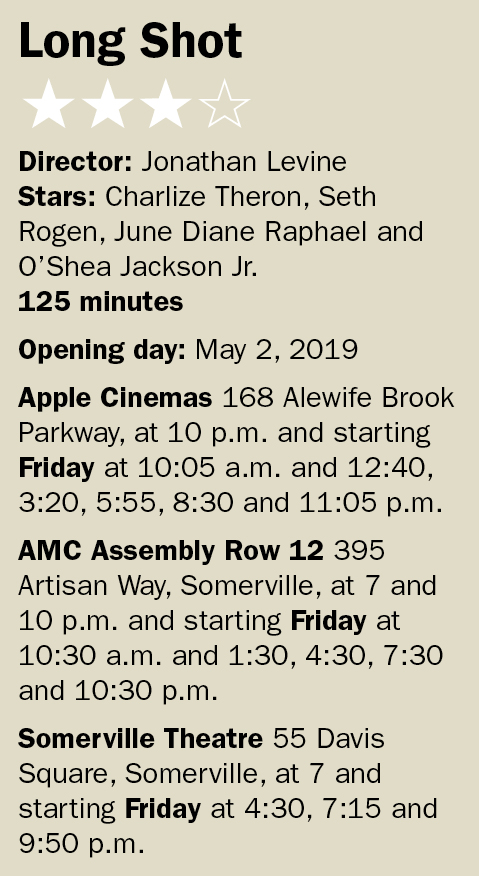 Before you say Hillary Clinton, “Long Shot” is set against a different political climate than the one we find ourselves in today – not that it doesn’t parody and poke at it. In this parallel political universe, the sitting president (Bob Odenkirk) is a former actor who has let it quietly be known he isn’t going to seek reelection because he’s got a series (Netflix, Amazon?), which triggers Field’s ambition. Along her test-the-waters tour there’s an early stop at a swanky Manhattan cocktail party where Boyz II Men happen to be the centerpiece of the all-white event. It’s there in the haughty suffocating stuffiness that she recognizes Seth Rogen’s Fred Flarsky, not because he’s in an electric blue windbreaker at a black tie event – one of many long running gags that goes on perhaps a bit too long – but because she babysat him when he was in his pre-teens, ending in an awkward moment when the young Flarsky winds up sporting a very visible erection.

Yes, that’s how “Long Shot” rolls. The script by Liz Hannah and Dan Sterling has the uproarious irreverence of “Something About Mary” (1998) and some sharp political spoofs too, especially Andy Serkis as the Rupert Murdoch-styled tycoon who just fired Flarsky’s ultra critical journalist (penning pieces such as “Why the Two-Party System Can Suck a Dick”) or Alexander Skarsgård as the Justin Trudeau-esque Canadian prime minister being pushed by handlers, the diplomatically community at large and the press on Charlotte as a romantic possibility.  The saucy send-ups of Fox News and CNN are bitingly hysterical, and sadly spot-on.

Plot-wise, Flarsky gets brought aboard as Charlotte’s speechwriter, and romantic seeds begin to take hold along a trip through Europe. That’s also when “Long Shot” becomes its least effective. Theron registers her best when Charlotte’s charming a room with her confidence and style or talking about the limitations of being a woman in politics: “If I am angry, I’m hysterical. If I raise my voice, I’m a bitch.” Not enough can be said about Theron’s presence and poise, and director Jonathan Levine seems to be well aware of the fact, as nearly every frame hangs from his star’s gravitational pull. Comedy star June Diane Raphael adds to the potpourri, playing it straight and sassy as Charlotte’s senior staffer, but the real big winner in this Theron tour de force (as well as carrying the film, she’s also devilishly funny) is O’Shea Jackson Jr., so good in “Straight Outta Compton” (2015, where he played his father, Ice Cube) and “Ingrid Goes West” (2017), and even more scene-grabbing here as Flasky’s bestie, a closeted GOP pragmatist. For O’Shea the future should be rife with opportunity, for Theron, there are no limits.