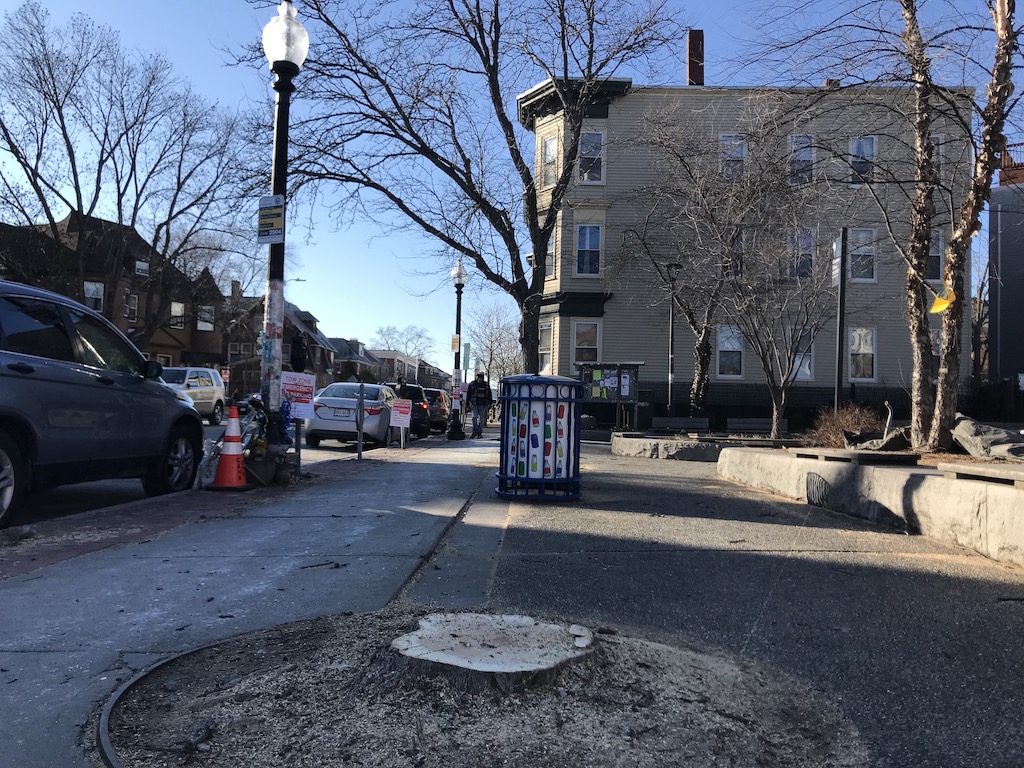 Vellucci Plaza in Inman Square saw four mature trees cut down as part of a city redesign of the square. (Photo: Marc Levy)

Seven Inman Square residents filed an appeal Wednesday in the Massachusetts Land Court against a redesign of the square, asking the court to review and annul a decision by the city’s Board of Zoning Appeal to let it go on – specifically changes to Vellucci Plaza.

The two-year, $7 million change to Inman Square would split the plaza in two, requiring a shrinking of the current plaza that in turn required the removal of four mature honey locust trees in January as work began. The redesign bends Hampshire Street between the smaller plaza and a new bump-out on the other side of the street to make an awkward, elongated intersection with Cambridge Street safer – essentially by turning it into two intersections that city planners deem safer for all forms of transportation.

If a review finds that alternative measures can provide equal or more safety at lower cost than the city’s plan, Vellucci Plaza can be redesigned and replanted “to grow again as it did when it first rose from the ashes of a 1975 building fire,” say the appellants: John Pitkin, Michael Reppucci, Megan Brook, Debra Mandel, Sara Mae Berman, Jonathan Harris and Gary Mitchell.

According to a press release from the appellants:

The zoning ordinance plainly states a requirement that the developer, in this case the city, must file a report on the proposed open space development with the city clerk for review by the public. The Planning Board then has 30 days to conduct a public hearing on the proposal and another 30 days to issue a report of its findings and recommendations. The ordinance also requires the city to obtain a special permit for uses other than parks and recreation in open space districts.

The city skipped these steps, the residents say.

“The city should have conducted a public review of the project before cutting down four mature trees in Vellucci Plaza and before authorizing Eversource utility work in the plaza,” Brook said. “Just because the city is now in violation of the zoning ordinance is no reason to give them a pass. They should still be required to allow an independent review of the project.”