Mysterious policy cited to limit entertainment is accepted by Zoning Board, 5-1, against pub 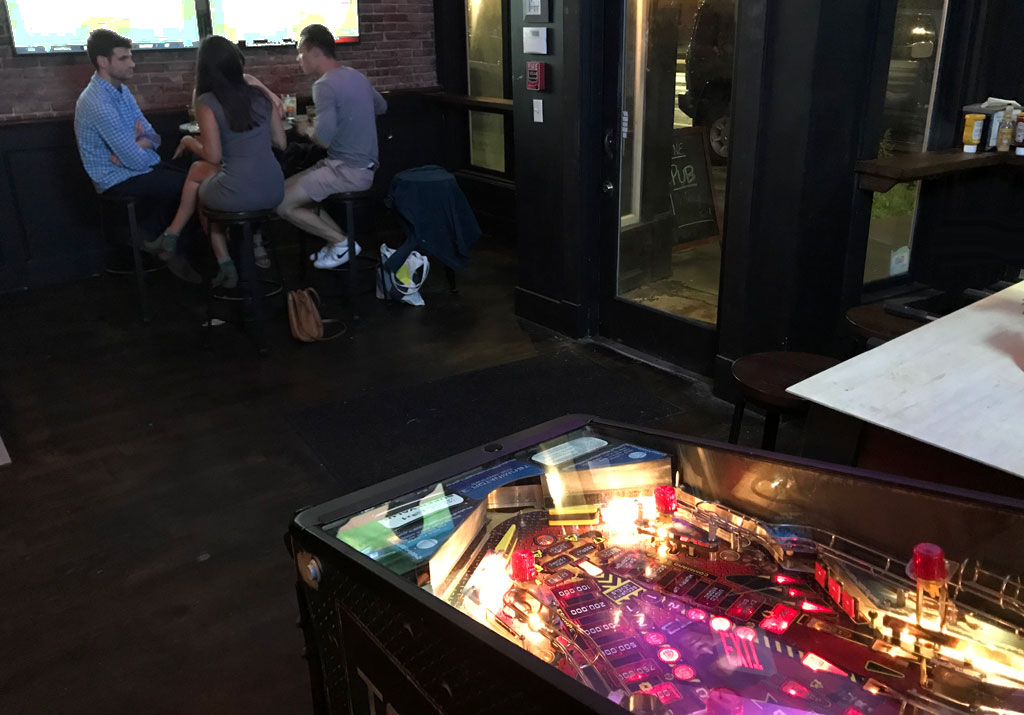 Mysterious policy cited to limit entertainment is accepted by Zoning Board, 5-1, against pub

In a case that could be troubling for restaurants and bars citywide, even city officials expressed dismay and confusion at the rejection of a pinball game, foosball table and jukebox for a Porter Square area restaurant that leaned on a supposedly 35-year-old policy in Cambridge that appears nowhere in zoning.

Officials on the Board of Zoning Appeal approved the decision 5-1 anyway, despite a defense by Ranjit Singanayagam, head of the city’s Inspectional Services Department, that included the claim that entertainment at the Lizard Lounge “must be background music,” even though the Lizard Lounge is a performance venue with live music and spoken word entertainment seven days a week.

The May 30 decision most directly affected the Shine Square Pub, at 2046 Massachusetts Ave., known as McCabe’s until December.

Based on the board’s approval, potentially any business in the pub’s position – a place in business districts where alcoholic beverages are sold and consumed, and entertainment is considered secondary, be it televisions, games or background music – can provide entertainment for only “up to two days per week.”

The policy cited by Singanayagam in a letter dated May 30 says:

“To the extent there may be other establishments within the district which have entertainment, such entertainment is allowed only as an accessory use up to two days per week, not on a full-time basis.”

Or, in an image you can click to see the full letter as a PDF:

It does not appear in city zoning and was unknown to members of the board, the public or the pub’s attorney, Kim Courtney.

“He does not cite any legal authority for this statement. I have no idea where this comes from,” Courtney told the board.

Singanayagam, in response to a prompt from acting board chair Brendan Sullivan, explained: “It’s a policy that has been since [Lester] Barber was in Community Development, almost 35 years ago … CDD and I decided [for] accessory use, not a full-time use, for a zone where there is no entertainment allowed.”

Another confusing aspect of the Inspectional Services decision and board’s approval was that the Shine Square Pub already has entertainment devices that Singanayagam said it could keep – but his testimony suggested that the amount of entertainment offered by the pub moved it from one zoning category (known as Section F, for an establishment “where no dancing or entertainment is provided”) to another (known as Section G, which speaks vaguely of a “dance hall or similar place of entertainment”), even though the amount was below what city zoning allows for an “accessory” use. There appears to be no standard that explains when a business moves from one designation to another

“‘Entertainment’ is only mentioned in Section G,” Singanayagam said. 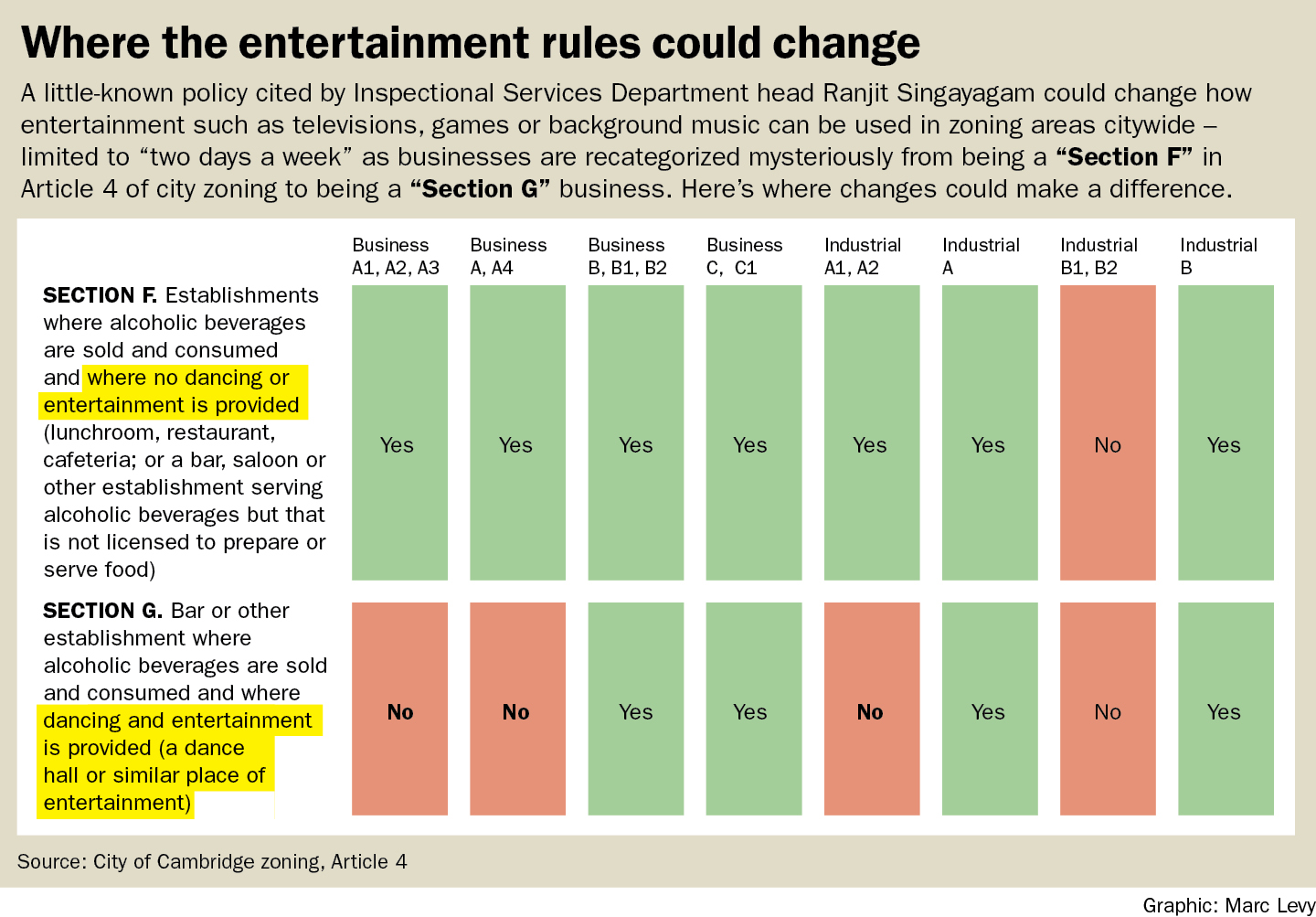 Heather Hoffman, a citizen in attendance who practices real estate law, addressed the board during a public comment period. “Where did Section G come from? And how does it suddenly become Section G if you add one more of something that’s already there? I am tremendously confused,” Hoffman said, urging the board to make a decision “that actually does make sense.”

“The City of Cambridge wants to have eating and drinking establishments all over the place, and so this is not just a decision that applies to one establishment. It will apply all over the city in people figuring out what they can and can’t do,” Hoffman said.

There were similar concerns from Ruth Ryals, who said she was speaking for herself despite leading the Porter Square Neighbors Association and serving on the economic advisory committee for the Envision Cambridge planning process. “Entertainment is what happens at Lizard Lounge or in Passim or at The Sinclair. [Shine Square] in no way a dance hall or even a bar,” Ryals said. “I’ve spent my life working with lawyers and actuaries and reading the code, [and] it’s a mistake to say [the pub] falls under G.”

Even members of the board expressed dismay over the claim being made against the pub. “It does seem a subjective decision and not an appropriate way to make policy or to promote policy,” said Laura Wernick, a BZA member who is also a principal at the HMFH architecture firm and past president of the Boston Society of Architects.

“The unclarity about entertainment I think is something that really needs to be addressed … It just seems so fuzzy what entertainment is and where it can be allowed,” Wernick said. “It seems that it does make it unfair for businesses trying to pursue economic benefits if they can’t understand the ordinance.”

Wernick wasn’t alone among board members in wanting more time to explore the issues and feeling unprepared to made an immediate decision, and there was momentum for the hearing to be continued without one. But when it looked like it would take until Sept. 12 to get the same members together to pick up where they left off, Courtney didn’t think it was a reasonable delay. She refused to sign the waiver to continue the discussion 3.5 months later.

Four votes were needed for Courtney to win her appeal of the Inspectional Services decision, but when the board voted she got only one – Wernick’s. A next step would take the case to Superior Court or Land Court.

The city’s official transcript of the Shine Square Pub portion of the May 30 meeting is available here as a PDF.