‘The Art of Self Defense’: He won’t be a victim, but sensei pushes a principle to the extreme 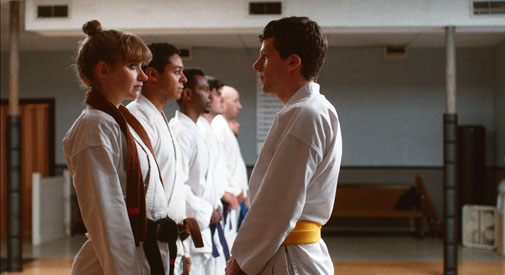 ‘The Art of Self Defense’: He won’t be a victim, but sensei pushes a principle to the extreme

“The Art of Self Defense” is a stunning little film that comes at you like a well-placed sternum punch in a dark alleyway. It begins with a droll, grim whimper as a wimpy nebbish gets viciously mugged by a gang of motorcycle thugs and subsequently waltzes into a dojo to allay his mounting fear. The set-up feels ripe for something of a comedic “Revenge of the Nerds” payback scheme, but “Self Defense,” directed by Riley Stearns (“Faults”) veers off into areas as shocking and black as such recent needle-in-your-eye edgy fare as “Midsommar” and “Under the Silver Lake.” 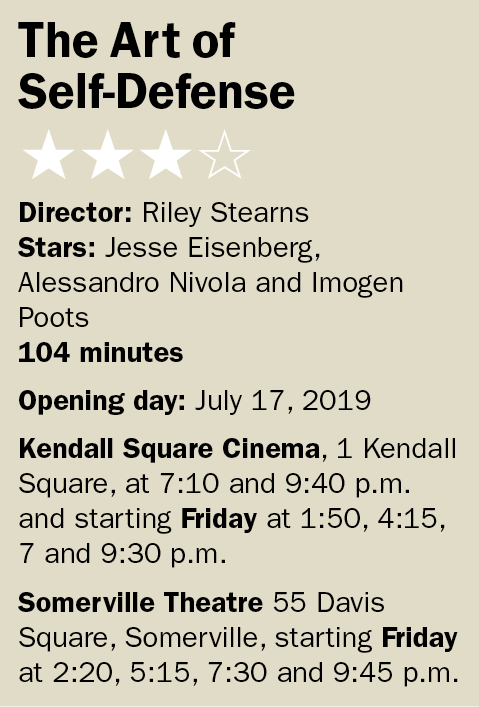 Casey, the self-suppressed office wonk on the receiving end of that beatdown (Jesse Eisenberg, in a role that seems tailor made), lives mostly for the affection of his demurring dachshund. The trauma of the event (he’s hospitalized) shakes him, and a chance venture into a martial arts studio sparks a meteoric transformation. The dojo’s owner, known simply as Sensei (a deadpan Alessandro Nivola) gets him on the hook with the cool, casual promise of confidence and control – you’ve gotta learn to punch with your feet. Sure, early encounters with bullies at a shopping mall don’t go so well, but at Sensei’s urging, Casey taps into head-banging metal, stops coddling his pooch and learns German. There’s also that application for a handgun (the store owner who prattles on about checks, the perils of firearms around kids, stats on suicide and the chance of becoming a homicide victim being higher for gun owners than non-owners might be the most responsible merchandiser of instant death ever portrayed on film) and a cold karate chop to his boss’ Adam’s apple over an innocuous invitation to dinner. Beyond swagger, Casey’s found his inner Bronson – and he likes it.

Eventually Casey’s invited to the special late-night classes, and that’s when the film enters “Fight Club” territory. In grim, gruesome detail, faces get punched in, elbows are disjointed and there are missions to confront others on the street – and no, these are not acts of vigilante justice or something even slightly noble. It takes a while to sink in (a noggin banged repeatedly against a cast-iron object helps make the realization for you) just how doubly dark Stearns’ reality-fraying portrait of a dweeb tweaked out on a testosterone high is.

“Self Defense” may amble along behind a sleepy indie guise, but at the corners it’s throwing jabs that keep you constantly off balance. Just as soon as you think you have it figured out, “Self Defense” grabs you in a cinematic jujitsu hold and throws you in another direction. You can’t fully right yourself – and that’s part of the fun. For some it’ll register as black comedic bliss, for others, the grim, bleak depictions will have you peering through splayed fingers. As gonzo as the film goes, it’s remarkably well composed, and Nivola and especially Eisenberg sell it perfectly. Imogen Poots reinforces the ensemble as Anna, the lone woman at the studio who, in earning her red stripe, reminds us what women have to confront in male-dominated spaces. She’s also one of the fiercest on the mat and the most compassionate off it. If there’s a message or parable to take from “Self Defense,” where “brute force” and “never back down” are mantras, it’s hard to find a humanistic application in these trying times. That said, the journey of empowerment for the meek is just, if just for that alone.