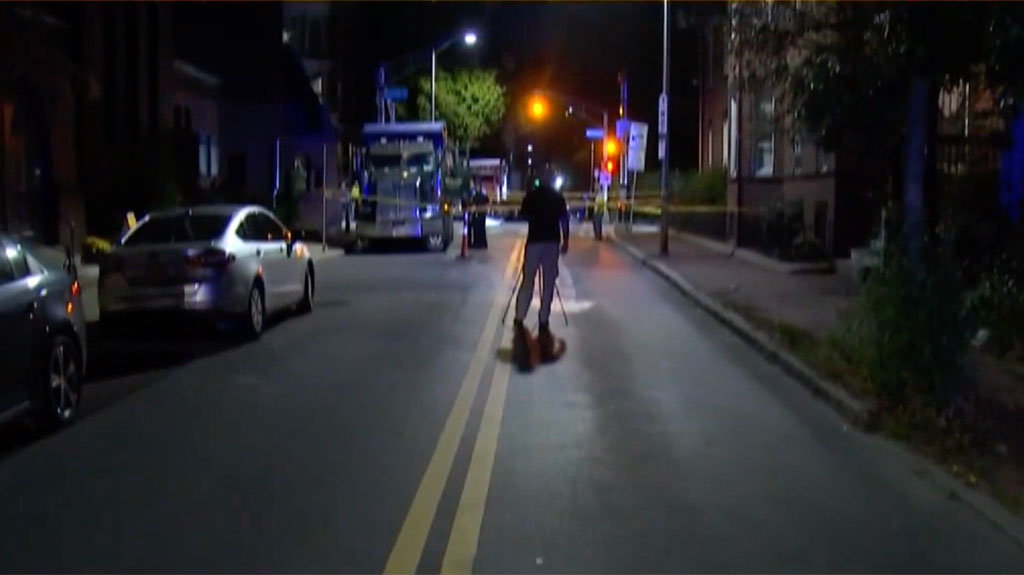 Police investigate the cordoned-off scene of a pedestrian death Oct. 5 at Putnam Avenue and Magazine Street in Cambridgeport in a screenshot from an NBCBoston news report.

A finding by State Police that blamed a pedestrian for the dump truck collision that killed her did not convince a judge to drop criminal charges against the truck driver.

Cambridge District Court Justice Robert A. Brennan rejected a motion to dismiss charges of vehicular homicide by negligent driving against Daniel Desroche, of Methuen. Desroche was driving the dump truck that killed Jie Zhao, 27, on Oct. 5, 2018, as he backed his truck through a Cambridgeport intersection while Zhao walked behind the truck.

A State Police analyst concluded that Desroche could not avoid hitting Zhao and that she caused the fatal crash by stepping into the intersection of Magazine Street and Putnam Avenue shortly before his truck began backing up on Putnam. The report did not include evidence gathered by police that a truck driver behind Desroche radioed him repeatedly to stop before he struck Zhao and that Desroche finally stopped, then drove his truck forward and ran over her again.

“Although the opinion of the expert police reconstructionist is compelling, it is not dispositive on the issue of probable cause [for the charges],” Brennan wrote in his Aug. 15 decision. “Based upon the facts contained in the various reports [submitted by prosecutors], there were numerous facts that could warrant a reasonable fact-finder to believe that the defendant’s decisions, actions and reactions were not those of a reasonably prudent driver.”

Desroche’s lawyer, Ronald Ranta, had argued that Desroche “took all the precautions a reasonable driver would take” before starting to back up, including checking his mirrors and putting the truck into reverse, which activated an audible signal. Echoing the State Police report, Ranta’s motion said Zhao’s actions were “clearly negligent.” He noted that Zhao was probably wearing earbuds and did not look for traffic before stepping off the curb.

Prosecutors countered that whether or not the young woman wore earbuds, “the causation of her death is the negligence of [Desroche] backing up a many-thousand-pound paving truck, not equipped with a backup camera, with limited sight on his side mirrors … in a matter of 3.4 seconds.”

Eyewitness accounts said the truck had gone past the intersection with Magazine Street before it began reversing, Assistant District Attorney Ashlee Mastrangelo wrote. It would not have been “‘reasonable’ [for Zhao] to foresee or believe the paving truck would back up the wrong way in the lane of traffic and into a busy intersection, in a matter of seconds.

“This manner of backing up is the very conduct that caused the death of Ms. Zhao,” Mastrangelo wrote.

The second truck driver, who was traveling behind Desroche to help him, told police that Desroche was angry and upset about having to make a second trip from an asphalt plant to Cambridge and complained about the amount of traffic and pedestrians. Both trucks were carrying asphalt to a city repaving project on Pearl Street.

Desroche had intended to turn right from Putnam Avenue onto Magazine Street and use that route to get to Pearl Street, which had been blocked off at Pearl and Putnam. Desroche missed the turn and was backing across the intersection to make it. He asked the second driver, Patrick Annese, to watch the intersection for him; spotting Zhao, Annese told him to stop “multiple times over the CB radio,” the ruling said. Before Desroche ran over Zhao a second time, Annese told him: “I can’t believe you ran over her,” Annese told police.

Brennan’s decision cited evidence that there were pedestrians on the other corners of the intersection, heavy traffic and that Desroche began backing up after Zhao had taken about three steps into the roadway.

She was looking down at a phone in her hand, although the phone was later found in her pocket. Zhao “may have been wearing headphones [and] either tripped or collapsed behind the rear right wheel of the truck,” the ruling said.

State Police inspected Desroche’s truck after the crash and ordered it off the road because of numerous violations; none could have contributed to the incident, the State Police report said. The inspection details included in Ranta’s motion indicated that two brakes on the truck were “out of adjustment” and said the brakes were supposed to be adjusted to account for “wear.”

Relatives of Zhao attended the Aug. 14 hearing when the two sides argued the motion to dismiss. Zhao’s mother and stepfather live in Wisconsin. Meghan Kelly, spokeswoman for Middlesex District Attorney Marian Ryan, said the office has a policy of not identifying family members of victims, so she could not say who was in the courtroom.

Zhao moved to the U.S. from China at the age of 14 knowing no English, and lived with her mother in Wisconsin. She learned the language, excelled in school and came to Cambridge to attend the Massachusetts Institute of Technology, graduating in 2014. She worked for a Cambridge company that helped other firms use social media and other Internet-based techniques.

She was killed less than two blocks from a condominium she had recently bought.

Desroche runs his family trucking business and has driven a truck his entire working life without a blemish on his record, according to Ranta.