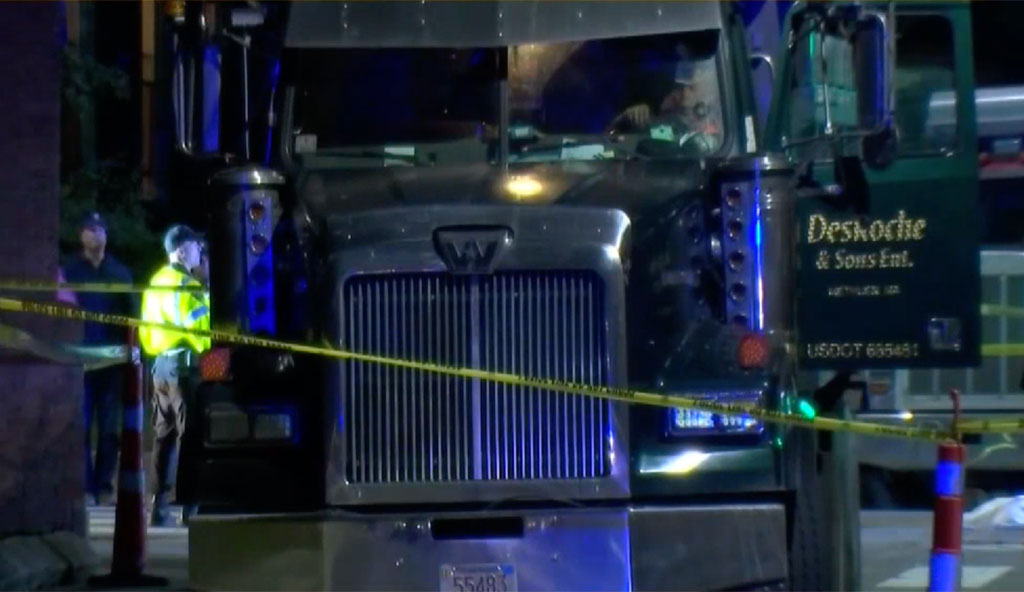 Having a spotter didn't help, and a second crushing came after warning
By Sue Reinert

A dump truck filled with asphalt for a paving job on Pearl Street is stopped at the scene of a pedestrian death Oct. 5 at Putnam Avenue and Magazine Street in Cambridgeport in a screenshot from an NBCBoston news report.

State police analysts have concluded that the Methuen driver whose dump truck ran over a 27-year-old Cambridgeport woman last year and killed her could not have avoided the crash, and that the victim’s actions precipitated it.

Despite the finding, prosecutors are charging the driver, Daniel Desroche, 53, with vehicular homicide by means of negligent operation. The state police report by the Collision Analysis and Reconstruction unit did not include some evidence gathered by Cambridge police and did not mention the fact that Desroche’s truck ran over the victim twice.

Desroche intends to move to dismiss the charges. A hearing Aug. 1 was postponed to Aug. 14 in Cambridge District Court. Desroche’s attorney, Ronald Ranta of Danvers, didn’t respond to a message left for him Tuesday. Meghan Kelly, spokeswoman for the Middlesex District Attorney, said she could not comment while the case is open.

Desroche was driving a dump truck filled with asphalt to a paving job on Pearl Street on the evening of Oct. 5 when he missed a turn from Putnam Avenue onto Magazine Street, according to court documents. He stopped his truck in front of the Cambridgeport Baptist Church at the corner of Putnam Avenue and Magazine Street and began backing through the intersection.

Around the same time, Jie Zhao, who lived less than two blocks away, started crossing Putnam Avenue behind Desroche’s truck. The truck ran over her, stopped, and ran over her again when Desroche reversed direction. She was killed immediately, according to court records, although it was not clear whether she was still alive after the first collision.

A second truck behind Desroche was traveling to the same job. The driver was checking the intersection for Desroche as Desroche started reversing his truck; he told police that he yelled repeatedly at Desroche to stop when he saw Zhao start walking behind the truck, to no avail.

The state police analysis did not include the second driver’s statements. Instead, the state investigators worked from measurements of where Zhao’s body and the truck were after the crash. The report assumed that Desroche was backing up at 4 miles per hour and about how fast a 27-year-old woman of Zhao’s height – 5 feet, 3 inches – could walk.

A week after the death, state police shut down the same intersection and restaged the event with Desroche’s truck. A taller police officer played Zhao. They took photos of the truck’s mirror at various points in its backward path, showing when Desroche could have first seen Zhao. Big trucks are known to have large blind spots in the rear.

A state police officer also inspected the truck, which had been impounded, and found “multiple mechanical defects” that were serious enough to have the truck “placed out of service,” the state police report said. But the problems would not have “contributed to this collision,” the report said.

It concluded that at the assumed backup speed of 4 miles per hour, it would have taken Desroche slightly more than 46 feet “to perceive, react” and stop the truck in response to trouble.

Desroche could not have avoided hitting Zhao, the report said. Instead, had the victim “been reasonably attentive,” obeyed the traffic light (it was against her), and crossed at the crosswalk “when it was safe to do so, this collision would not have occurred,” the report said. It cited a regulation forbidding pedestrians to “suddenly leave a sidewalk … and run into the path of a vehicle which is so close that it is impossible for the driver to yield the right of way.”

The report noted that Zhao had an iPhone in her pocket and an Apple EarPod was lying to the left of her body. Zhao’s “use of audio headphones may have contributed” to the crash, the report said. The second truck driver told police that Zhao appeared to be looking down at her phone as she began crossing the intersection.

At least two witnesses who were in cars stopped at the scene told police that Zhao seemed to be startled when she saw the truck moving backward and fell down before being hit. Desroche’s truck was blocking the crosswalk near the church so Zhao was walking diagonally across the intersection, one witness said. The truck’s backup alarm was audible, witnesses said, and an audio file from a surveillance camera at a nearby home confirmed that. The camera was pointing into the house, so there was no surveillance video of the incident.

The second truck driver, Patrick Annese, told police in a recent interview that when the two men were picking up their loads of asphalt, Desroche was “angry and upset about having to come back to Cambridge [for a second trip] and the amount of traffic and pedestrians,” according to a police account of the session in the court file.

Annese said the two drivers communicated by CB radio and Desroche asked Annese to watch the intersection as he backed up. When Desroche stopped after running over Zhao the first time, Annese said he told Desroche, “‘I can’t believe you ran over her,’” the police account said. Then Desroche went forward and ran over Zhao again.

Zhao came to the United States from China at 14 to join her mother living in Wisconsin, learned English, excelled in school and graduated from the Massachusetts Institute of Technology in 2014. She worked for a Cambridge company that helps other firms use the Internet and social media. Desroche owns his family trucking company and has driven a truck for his entire working life. Ranta, his attorney, said previously that the incident was “a tragedy” but not a crime.

This post was updated Aug. 8, 2019, to correct references to Jie Zhao.