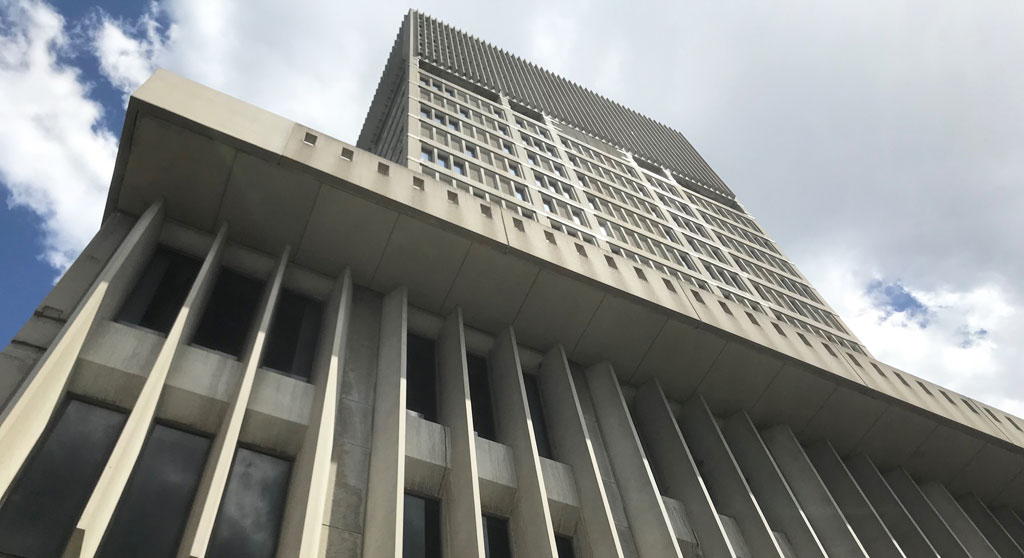 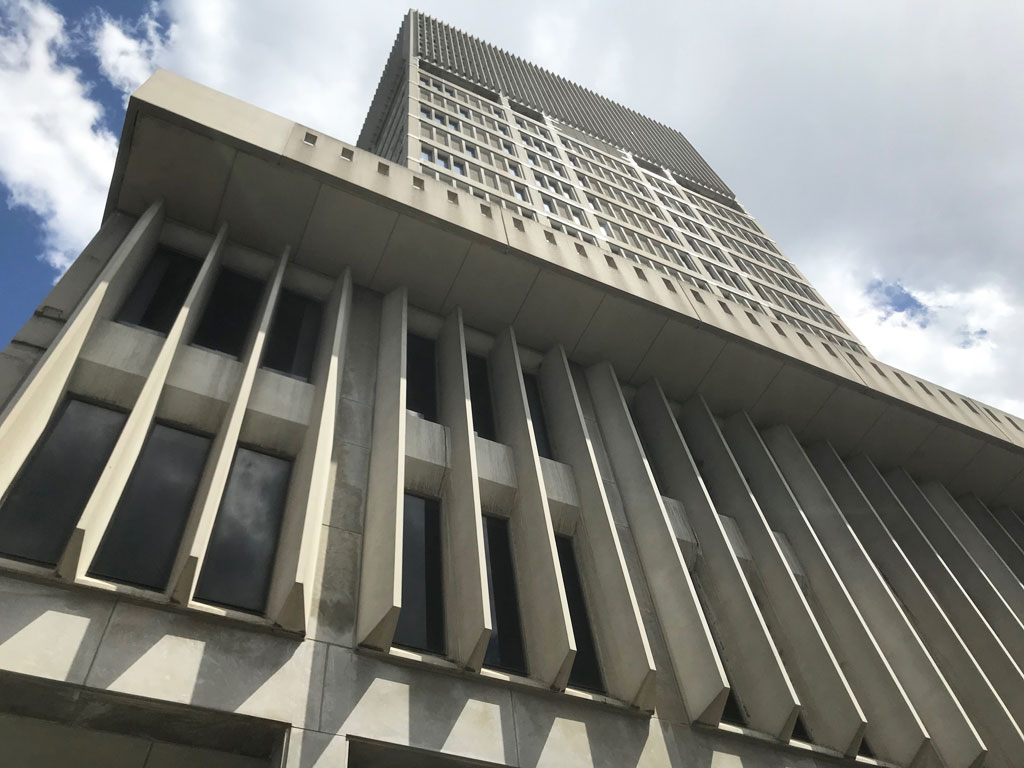 Development of of East Cambridge’s former Edward J. Sullivan Courthouse got a boost Wednesday from a majority of the City Council. (Photo: Marc Levy)

In the ninth inning of the City Council’s double-header of two very important meetings Thursday, councillor Sumbul Siddiqui hit what is being characterized by some as the equivalent of a walk-off home run to wrap up months of heated debate over the First Street Garage disposition and the future of East Cambridge’s former Edward J. Sullivan Courthouse. Before unpacking my morning-after thoughts about the conclusion of yesterday’s episode of the long-running courthouse drama, I would like to thank councillors Siddiqui and Quinton Zondervan for their leadership on cannabis equity, which ultimately secured seven votes, including my own, in support of a two-year head start for state-approved “economic empowerment” businesses to open adult-use cannabis retail stores in Cambridge. Once officially adopted by the full council – the vote is expected Monday – this will make Cambridge the first city in the commonwealth to use the full extent of its local permitting authority to prioritize social equity businesses.

But I have mixed feelings about the way Thursday’s second hearing concluded, and I feel it is important to express them. I want to be clear that none of what I will say is personal; I respect and like councillor Siddiqui, and we have supported each other on many issues this term. I look forward to working with her during the remaining months of this term, my last on the council.

When our reconvened hearing on the First Street Garage disposition opened, the only vote still in doubt was councillor Siddiqui’s. As the undecided swing vote, she had considerable power, but I don’t think she used her leverage to its full advantage.

First, I will recap quickly how the hearing’s ninth inning played out. Up to that point, during almost two hours of debate and questions to the staff, councillor Siddiqui was mostly silent, except for a question to confirm that developer Leggat McCall Properties had indicated officially a willingness to return to the Planning Board to amend its 2014 special permit by reducing the required parking by 125 spaces. She also asked rhetorically whether the market value of the courthouse site had increased in the six years since Leggat McCall acquired it from the state; the developer said yes, but did not quantify the increase in value. Finally she revealed what she would need to become the critical sixth “yes” vote on the garage disposition.

Her list of “contingencies” asked Leggat McCall to agree to:

Doubling the number of affordable housing units (from 24 to 48);

Reducing parking leased in the city garage by 125 spaces (from 420 to 295) and to seek a further reduction of up to 25 spaces in the total parking requirement (from 510 to 360 total for the project);

Donating an additional $3.5 million to the Affordable Housing Trust;

Committing to leasing a small amount of already-promised community space in the courthouse building to a local nonprofit day care provider.

The developer’s lead attorney, former mayor Anthony Galluccio, barely blinked at these demands, which took me and others on the council by surprise. His only counter-ask was that the additional payment to the Affordable Housing Trust be delayed until 18 months after the courthouse redevelopment gets its certificate of occupancy. He also underscored that these conditions are subject only to the developer making its “best efforts” to secure the Planning Board’s approval to amend its special permit. A four-minute recess was all LMP needed to agree to these supposedly brand-new terms.

Within just a few more minutes the council voted 6-3 not only to approve the disposition with these newly revealed and undebated conditions, but to block future reconsideration of the vote. Game over. (To no one’s surprise, councillors Dennis Carlone, Zondervan and I voted “no.”)

After months of authentic grassroots advocacy led by state Rep. Mike Connolly with rallies, a door-knocking campaign and a petition that gathered more than 1,250 signatures to reject the parking disposition outright to give the city leverage with the state to negotiate an inclusive, community-driven alternative plan with affordable housing as its centerpiece, councillor Siddiqui went to the brink and then folded our hard-won winning hand too quickly, even depriving the three councillors who had always demanded much more from the courthouse redevelopment of any opportunity to improve her deal’s terms. It was the momentum built through the grassroots campaign to stand up to the expensive, professional public relations campaign waged by Leggat McCall that put councillor Siddiqui in the position to even make these demands. She could have stated them as the opening bid on what she would need to get to “yes” without rushing us to a final vote last night. Seizing her own bird in the hand deprived everyone else of a voice, which sadly is pretty much the opposite of a collaborative and transparent community-driven process.

More affordable housing units are unquestionably a positive addition to the project, but the percentage of housing in the outsized building still will be less than 10 percent of the total space. During the 2014 Planning Board hearings for the project, Leggat McCall insisted that 24 units were all that would fit in the podium portion of the building and that housing would not be feasible in the tower portion. Nothing about the building’s structural constraints has changed; the Planning Board and the community must hold Leggat McCall accountable to following through on this new commitment to deliver all 48 affordable units on site.

Furthermore, the reduction in the required parking, which it seems possible the Planning Board could approve without even requiring a traffic and parking study to update data that are now six years old, will save Leggat McCall a substantial amount of money. By subtracting 150 spaces from its lease in the First Street Garage, Leggat McCall would save about $17.5 million over 30 years (that’s about half of its reported acquisition cost for the courthouse). The approximately $49 million in guaranteed revenue to the city from the parking lease had been touted as a significant community benefit; councillor Siddiqui’s bargain will reduce the value of that benefit by about 35 percent. And in a little less than six years, the additional $3.5 million payment to the Affordable Housing Trust will have been recouped through these windfall savings on the parking lease. Where those 150 cars will park if not in the city garage in spaces leased by Leggat McCall remains an open question. One might fairly ask if this grand bargain could, in fact, prove to be a net financial gain for Leggat McCall. But in its rush to close on councillor Siddiqui’s unilateral deal, the majority of the council deprived itself and the public of any opportunity to more carefully consider what was agreed to so readily by Leggat McCall. In her desire to tie up her deal with a neat bow and accept Leggat McCall supporters’ accolades for her power play, I think councillor Siddiqui squandered the leverage the community had given her.

Councillor Siddiqui was right when she acknowledged that her choice to cut a deal with Leggat McCall would disappoint some people. I am one of them, and I am not alone. I hope we can all learn something from this experience. Time will tell what that lesson is.