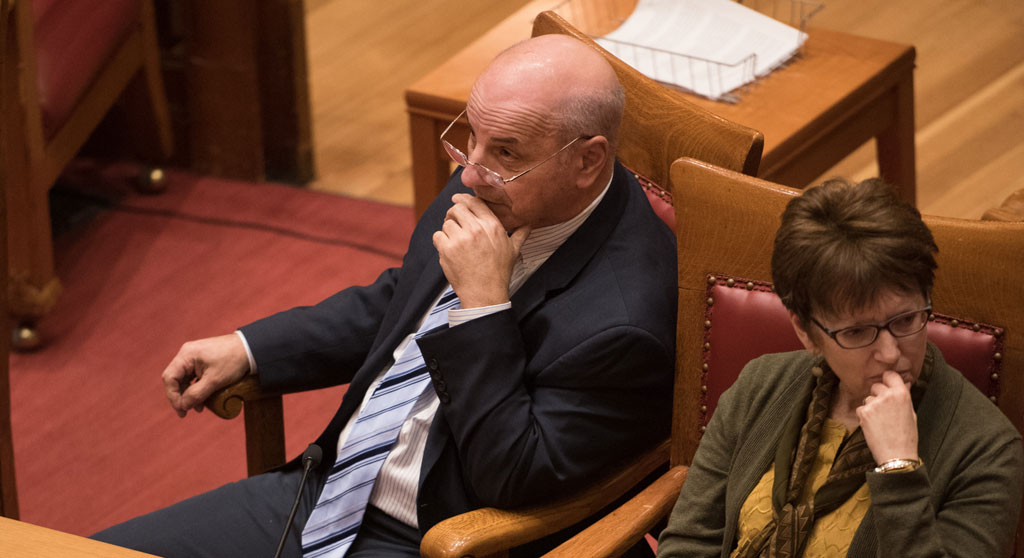 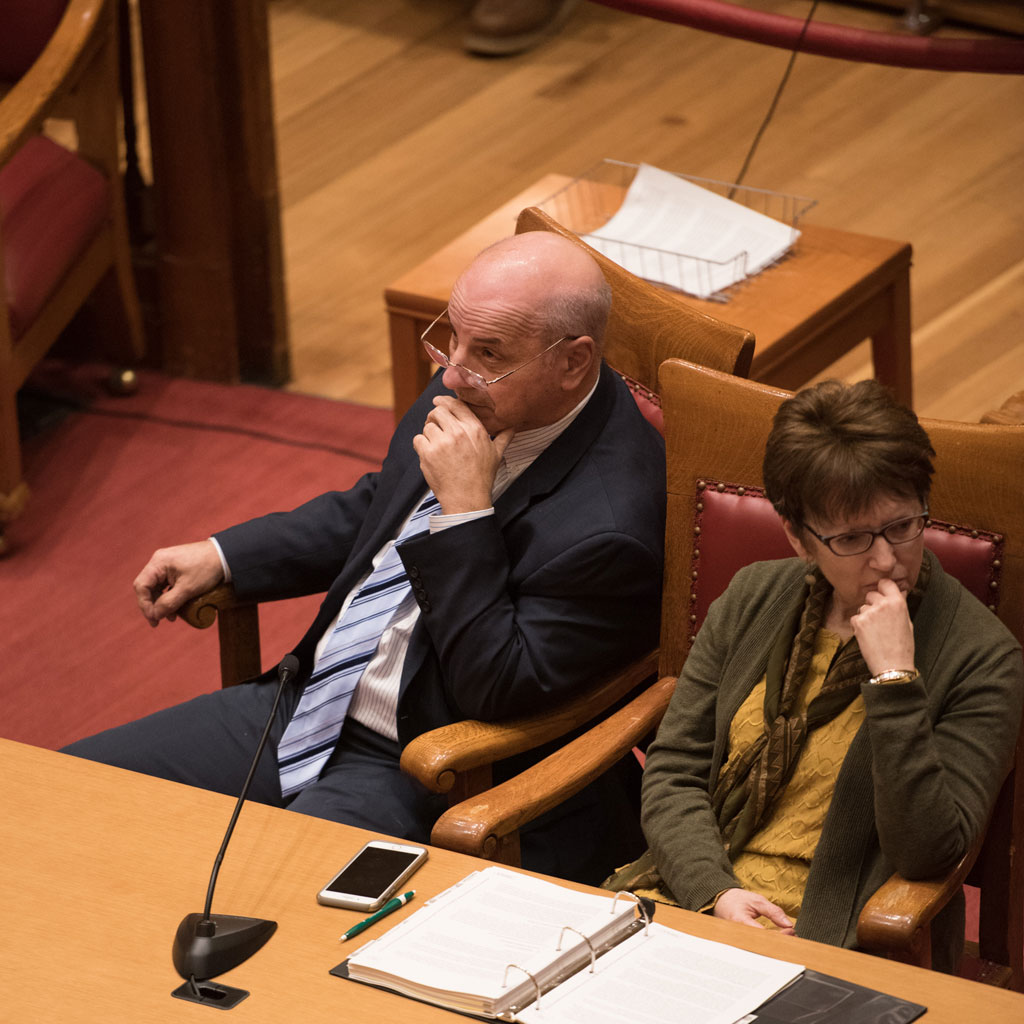 Only 6 percent of Cambridge voters went Trump/Pence in 2016, so there are surely plenty who’ve cringed for years at how the Trump administration handles governing. But do the cringers notice the parallels with their own municipal government?

City Manager Louis A. DePasquale is not anything like President Donald Trump, of course, not personally. But bad government can look the same whether on a local or national level.

The scandal that led Democrats to a formal Trump impeachment inquiry Tuesday was signaled by a whistleblower and included complaints of an attempted coverup. As U.S. Rep. Adam Schiff described it, Joseph Maguire, acting director of national intelligence, “received an urgent and credible whistleblower complaint directly implicating the president. He didn’t provide it to Congress as required. He consulted the White House – the subject of the complaint,” Schiff said on Twitter, “the same White House the complaint alleges sought to conceal Trump’s misconduct.”

The local example is not a precise parallel: Cambridge Day filed a complaint with the Police Review & Advisory Board about police commissioner Branville G. Bard, and instead of following city law to conduct a preliminary investigation, board executive director Brian Corr engaged in 43 communications with city solicitor Nancy Glowa to decide that the citizen panel known as PRAB didn’t have “jurisdiction” over the police commissioner.

“The city solicitor … represents boards and commissions and the council and departments of the city,” Glowa told city councillors Sept. 16 (while not speaking to what happens during a conflict, such as when the council challenges one of those commissions).

The city will not make its communications or reasoning about jurisdiction public, claiming “attorney-client privilege,” and this too has a rough parallel in our federal government, where the Justice Department’s Office of Legal Counsel has built “a whole body of secret law that remains shielded from public view,” as Cristian Farias wrote in August in Politico. That’s even though the office “makes law that holds tremendous sway over issues of public concern.”

Another crazy-making thing about the federal government as led by the right is the way it abuses science and the facts – something that started long before Trump took office. It’s immeasurably worse at the federal level because Republicans there apply anti-fact principles to such critical issues as climate science (ignoring accumulated data in favor of bad and misleading propaganda) and gun violence (including stopping the Centers for Disease Control and Prevention from gathering information on shooting deaths).

In Cambridge, the DePasquale administration’s ways of putting blinders on to facts and alternatives don’t tend to risk human lives. But it has spent years refusing to do a study that can provide the city with real wisdom about municipal broadband despite widespread public desire to see the numbers, while other cities nationwide speed ahead on building infrastructure and breaking a few companies’ Internet monopolies. Residents and councillors alike have called out an East Cambridge parking study and Inman Square redesign as being flawed, and the city’s defenses as being unconvincing. In each case, administration officials have just ignored obvious, basic questions about their methodologies. In the case of whether the health hazards within East Cambridge’s former courthouse were leaching out into the neighborhood, a panel of municipal health experts let the state handle the issue within the courthouse property – an approach that fails to answer residents’ actual concerns. (They said they couldn’t go on state property to do water, soil or air samples; nothing prevented them from testing water, soil or air across the street, which is where the panic had been. Even more strangely, neighbors didn’t seem to care.)

Like the U.S. Constitution spells out that our federal government’s democracy functions because of checks and balances, the city’s Plan E charter spells out the roles of the City Council (legislative) and city manager (administrative). But just as the Executive Branch of our federal government has accumulated more and more power over the decades, so too has the City Manager’s Office in Cambridge claimed power to unintended degrees.

Trump has been aided in the breaking of our democracy through the concentration of Republican power through different branches and levels of government: The presidency, Senate, much of our courts (and certainly the U.S. Supreme Court) and governorships are largely in Republican hands, and some of that has been achieved in ways that don’t feel appropriate, including extreme gerrymandering, vote suppression and the refusal to hear then-President Barack Obama’s choice for Supreme Court justice. In Cambridge, the democracy-warping consolidation of power has been achieved more legitimately, through longevity in the office that hires and appoints everyone except elected officials, the city clerk and auditor.

We’ve arrived at a point where some residents fear fighting back or even speaking out against malfeasance or injustice because they fear retaliation, and where city councillors feel hampered from their role as legislators and checks on city manager power because that office could see their initiatives quashed.

Again, to state the obvious: The Trump administration is many times worse, in many ways. Trump’s White House, for instance, enflames racial animosity through xenophobic policies, which is not the case with DePasquale, and Trump is credited with the attention span, intelligence and temper of an especially stupid and spoiled teenager, insults that have never been heard against DePasquale. Our city manager is expert at setting neighbor against neighbor, whether it’s business owners vs. bicyclists or around Inman Square, the courthouse, an affordable housing overlay or just development by development; but he doesn’t rule through ranting, unlike the topic of Bob Woodward’s book, “Fear: Trump in the White House.”

But as a principle of executive power? This administration can’t be relied upon to do top-quality work or come to smart conclusions because justifications often seem to fit around a predetermined decision rather than result from a process in which data shape an emerging conclusion. That is an ugly and unfortunate rhyme with what we see federally, the outcome of something ThinkProgress commented on in July:

There is a “culture of fear, censorship, and suppression” within the Trump administration that is impeding government scientists from doing their best work, former Interior Department policy director and scientist turned whistleblower Joel Clement warned.

As a candidate, Trump once told Woodward and another Washington Post reporter that “Real power is – I don’t even want to use the word – fear,” and he has followed through as a way of maintaining discipline within his administration and party. “There is one place where Mr. Trump’s fear tactics have been an unqualified success: among Republicans. Mr. Trump has held an iron grip on the Republican base, making it difficult for fellow party members, who also rely on … core voters, to oppose him,” New York Times reporters have noted. He has “demanded political loyalty from Republicans in Congress and drove several who bucked him from office.” The same story from February included this comment:

“There is no constituency within a party that is so dominated by one individual that is charting a course with the opposition unless you want to be a former lawmaker,” said Josh Holmes, a Republican strategist.

That sounds like the legislative stranglehold councillors describe in Cambridge, where if you want to be effective and reelected, it’s understood that the city manager is in charge – no matter what the charter says.

Again, our city manager is nothing like Donald Trump. That’s why he should try harder to make Cambridge’s government less like the one run by Donald Trump.