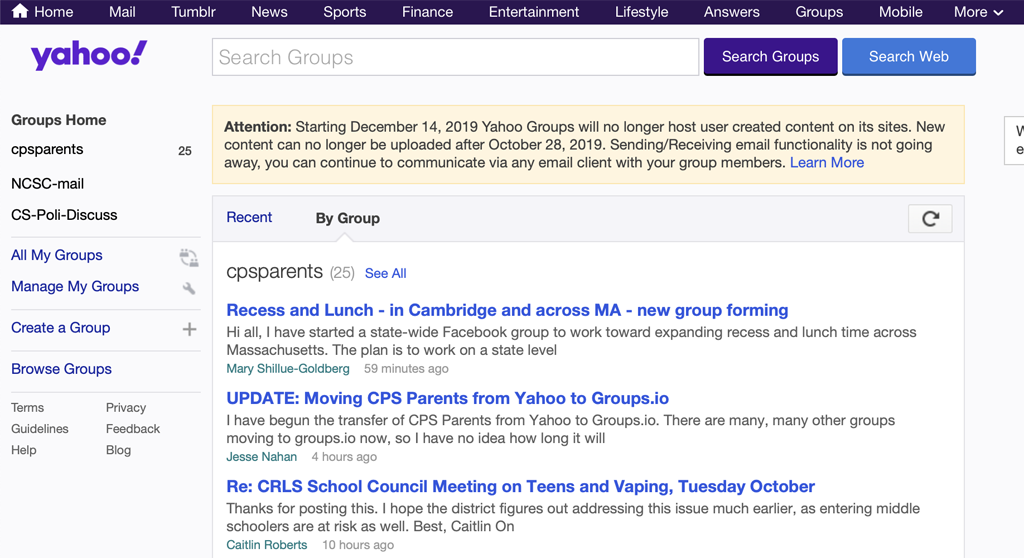 Yahoo has posted a notice atop its Groups service listings that its website functions end this month.

A nearly nine-year archive of conversation and information about Cambridge Public Schools is among the victims of surprise deletions coming this month to Verizon’s Yahoo Groups service – along with a political subgroup, a Cambridge Families list and the North Cambridge Stabilization Committee, as well as many others that may have lived only briefly in Groups’ 18-year life.

Reading, posting and replying to messages online will be disabled as of Oct. 28, Yahoo said, and the company would delete all “previously posted” material Dec. 14 – leaving administrators of potentially hundreds of thousands of lists nationwide with millions of users scrambling to find new homes and a way to archive conversations. Email dialogues can continue among members, Yahoo said.

“I especially feel the list archives are an essential resource,” said Jesse Nahan, moderator of the Cambridge Public School Parents group, which began in January 2011 and has 1,397 members.

While some city groups, such as the Cambridge Special Ed Parent Advisory Council, use Google groups software for its online dialogue, Nahan said he – like many others nationwide – planned to move to the Groups.io system, which would take care of transferring the Cambridge Public School Parents group and its message archives.

“I have moderated a few Google Groups and I have not been impressed,” Nahan said, while Groups.io “is adding features, not taking them away.”

The service said Monday it is also doubling its annual fees, which Nahan luckily noticed early Tuesday, with hours to go before the price hike deadline. He alerted Katie Starbuck of the Cambridge Families group – an even larger list of around 3,000 participants – so they could get in just under the wire to sign up at the lower price of $110, Nahan said.

“They built this to be all about groups, and now Groups.io is getting flooded with business and need to add servers and needs to add staff. So from a business perspective, [the price increase] makes sense,” Nahan said.

Yahoo Groups was identified by the company in 2010 as having 115 million members among 10 million groups, but no new information was made available.

Yahoo didn’t explain its shutdown of Groups, or even publicize it, leaving people nationwide panicked and angry – a repeat of 2009, when the company shut down its GeoCities hosting service and its roughly 7 million websites. The Internet Archives group captured what it could of GeoCities, with archivist Jason Scott saying at the time to Time magazine that “These guys found the way to destroy the most massive amount of history in the shortest amount of time with absolutely no recourse.”

On Oct. 16, Scott said the Internet Archive would snapshot what it could of Yahoo Groups. “We will take a huge-ass snapshot,” he said, but of course the experience would suffer. “People will lose all the functionality of access, search, reference. That’s the price that’s paid – we turn things into snapshots instead of reference books and living things.”