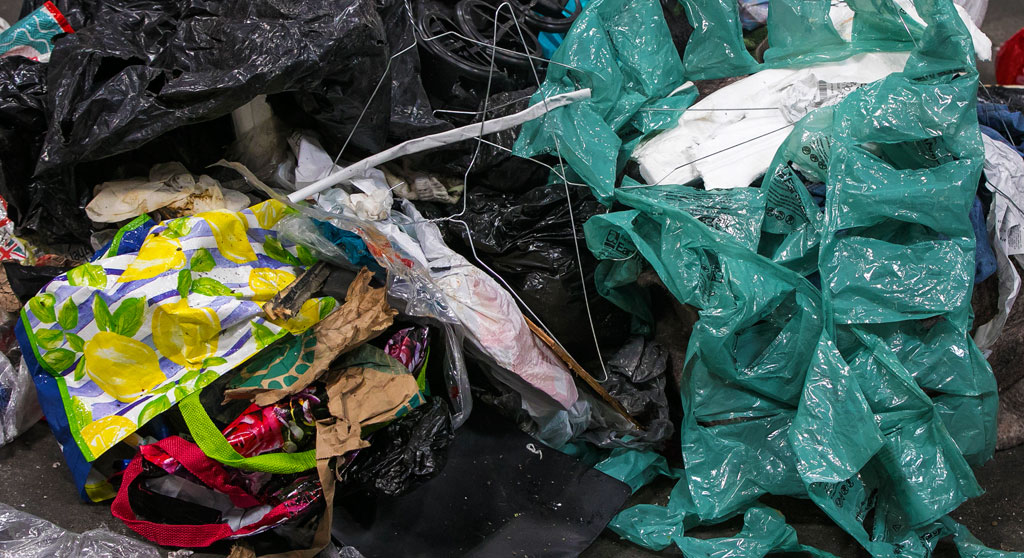 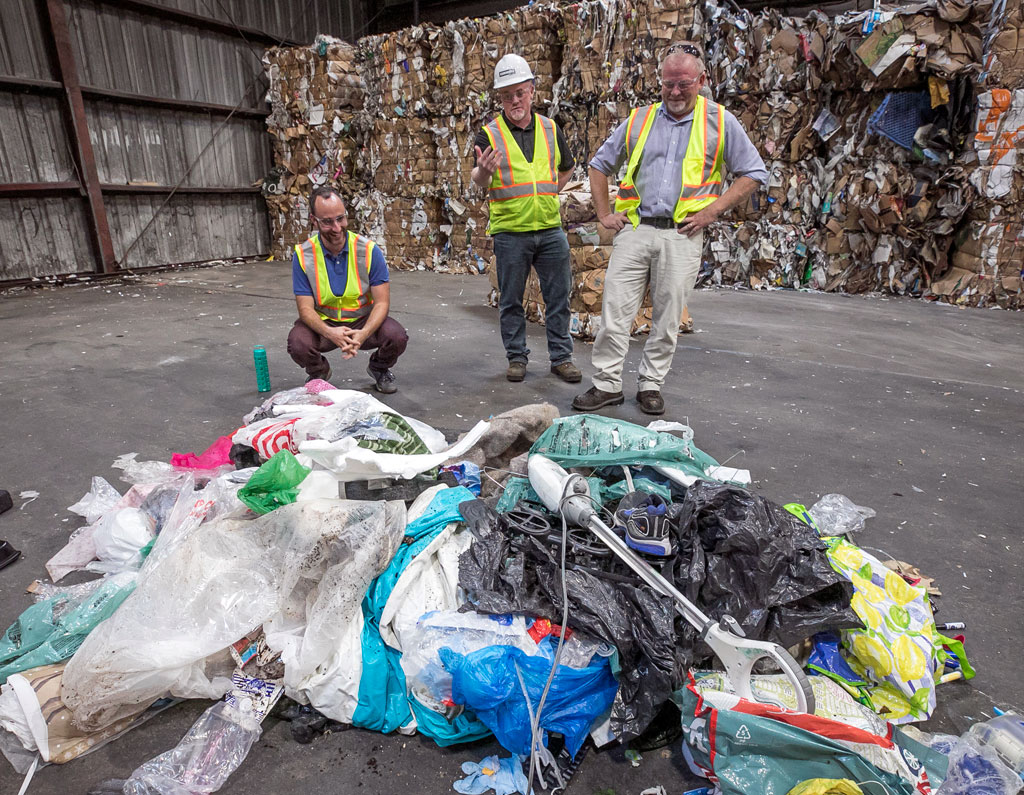 Contaminants still get into Cambridge recycling, but city workers have seen a drop this year. (Photo: Kyle Klein, courtesy of the Department of Public Works)

America Recycles Day came and went Friday with little notice, but Cambridge had cause to celebrate: In October, the city announced a significant drop in recycling contamination – to 6 percent from 11 percent in 2018.

“[The decrease] was more than I expected,” said Mike Orr, recycling director at the city’s Department of Public Works. “We thought that this was going to be a two- to three-year process, but we’re finding that 12 to 18 months is all we needed to make significant headway.”

Contamination – when residents throw items that can’t be recycled into the blue carts – is the bane of recycling programs. Frequent contaminants include old clothes, wire coat hangers and plastic bags. The city’s recycling contractor, Casella, conducts routine audits to measure the percentage of contaminated material because higher contamination rates mean higher costs for the city. 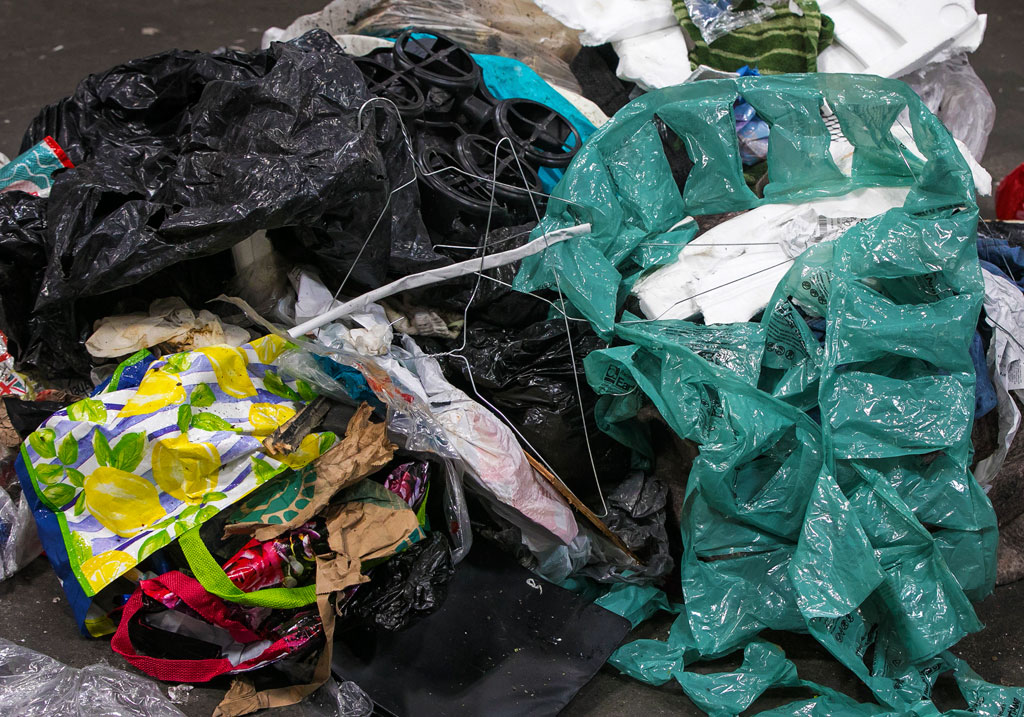 Some of the recycling contaminants found in August 2018. (Photo: Kyle Klein, courtesy of the Department of Public Works)

Orr credits education and enforcement for the cleaner recycling stream. The city stepped up promotion of its “Recycle Right” campaign; ads were placed on bus shelters and Blue Bike stations; mailings reminded residents of what can and can’t be recycled, and promoted the “Get Rid of It Right” tool on the city’s website – also a feature of the Zero Waste Cambridge app.

Curbside monitoring of blue recycling carts began in September 2018. Public Works inspected about 4,400 carts, giving those with medium to high contamination “Oops” tags to alert residents about offending items. According to Orr, contractors continue to watch the carts they’re emptying and reject carts that have too much contamination.

In November 2017, nearby Newton had a contamination rate of 18 percent, according to Waneta Trabert, the sustainable materials management director there. To lower the rate, Newton began curbside inspection of carts in the fall of 2018, funded with a grant from the state’s Department of Environmental Protection.

“You go out to the curb and lift lids and look in and provide feedback to residents,” Trabert said. If contaminants were found in a cart, residents were given a warning. If violations persisted, carts would be rejected. By January, Newton’s contamination rate had dropped to 9 percent.

Across the river, Boston has a contamination rate “depending on where you’re looking, something like 16 percent to 20 percent,” said Brian Coughlin, Boston’s superintendent of waste reduction. “We know we have some work ahead of us as far as education campaigns and different kinds of strategies to try to lower that.”

Recyclables are commodities, and commodity prices rise and fall with supply and demand, “but there’s always going to be demand for the cleaner materials,” said Amy Perlmutter, a consultant who previously directed the Chelsea Center for Recycling and Economic Development; before that, she managed San Francisco’s recycling program.

“A lot of domestic markets went out of business because of the competition from China,” Perlmutter said. The United States buys large quantities of goods from China that are transported in cargo ships – and rather than returning empty, ships had carried U.S. recyclables back to China at very low costs. “Rather than trucking or using trains to send recyclables around the U.S., it was cheaper to send them to China. 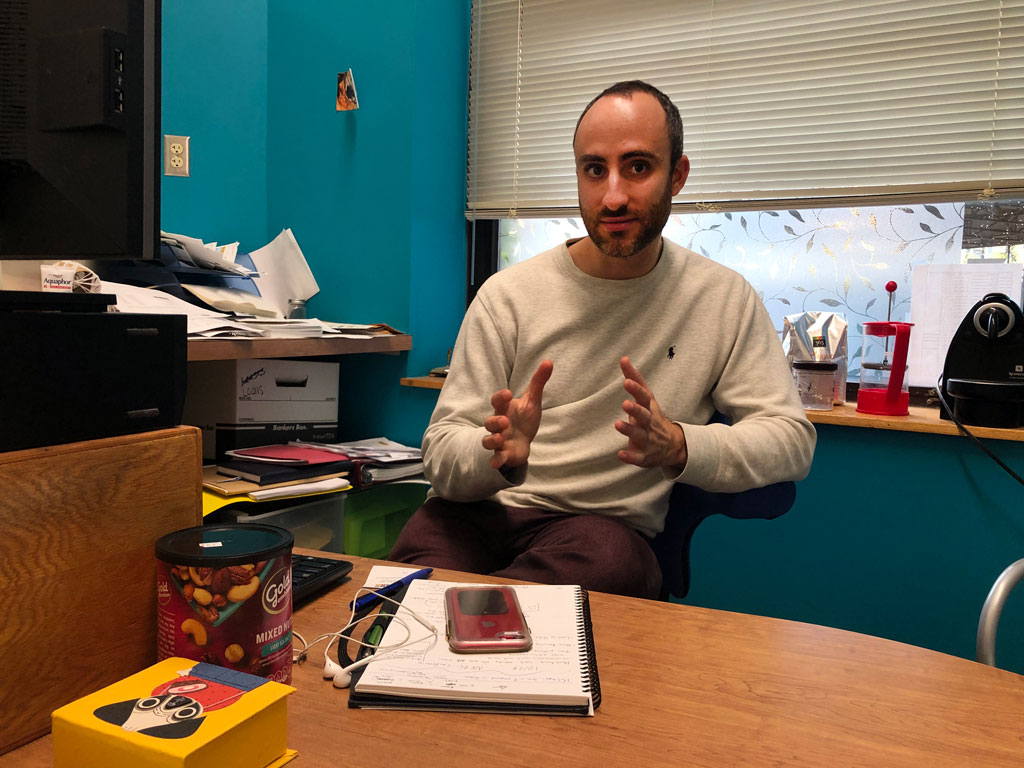 Mike Orr, recycling director at the Department of Public Works, said the drop was contaminants was more than expected. (Photo: Martha Henry)

“For a while, China didn’t care about the contaminants. We were able to move large quantities of very low-value stuff. China finally said, ‘Enough, we’re not going to take your stuff anymore,’ which left our markets scrambling,” Perlmutter said.

China’s National Sword policy, which went into effect in early 2018, banned imports of 24 types of waste material and set hard-to-achieve contamination levels for others. The world’s biggest market for recyclables disappeared almost overnight.

“To keep moving the quantities of low-value stuff, companies like Casella found themselves stuck and scrambling. That’s pushing the whole movement to reduce contamination,” Perlmutter said.

With China’s change in policy, Cambridge’s costs to process recycling increased from about nothing per ton to about $35 per ton. In the summer of 2018, when Casella started auditing more closely, costs increased to $70 per ton. But the city had a way to get it back to $35 per ton: “The magic number was 7 percent,” Orr said. “We’ve achieved that goal.”

Orr’s happiness isn’t the lasting kind. “Our contract with Casella is up in a year,” he notes. For the next renewal, “it’s a whole different world.”

Martha Henry is a member of Cambridge’s Recycling Advisory Committee and writes about trash and recycling.