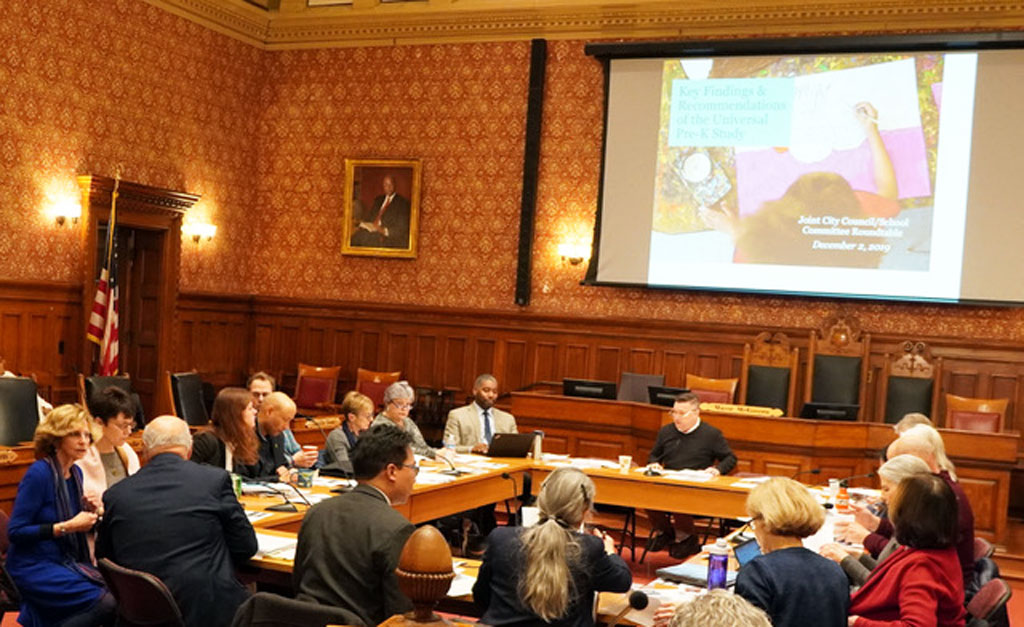 Whichever of three redesigns is selected for a Tobin Montessori and Vassal Lane Upper School restructuring, its population will be a problem. The Innovation Agenda, which seven years ago broke off upper schools from what had been a K-8 model, intended caps of roughly 300 students – yet the projected student body at a new Vassal Lane is 450.

School Committee members expect to talk about that at their meeting Tuesday, a follow-up to a roundtable discussion held with the City Council last week.

Recently completed campus renovations at two other combined elementary and upper school sites were at capacity before they opened their doors, noted Mayor Marc McGovern, who also leads the committee.

The capacity of the reconfigured campus will increase to 1,164 students from 725.

Significant changes at the elementary level are a separate special education program of 40 students and an increase in a Special Start program, for 75 preschool-aged children with disabilities, up from 14. At the upper school, changes would include an increase in sixth- through eighth-grade students to 450, and new programs for sheltered English immersion (for 75 students) and special education (for 48). A Human Services preschool for 160 will also be added.

There were three proposed designs presented by Perkins-Eastman architects, each giving the three schools – Tobin, the upper school and the preschool – separate facilities but sharing the gym, auditorium, cafeteria and additional common and office space.

The space allocated to “CPS districtwide” purposes would almost triple, to 22,300 square feet from 8,317. 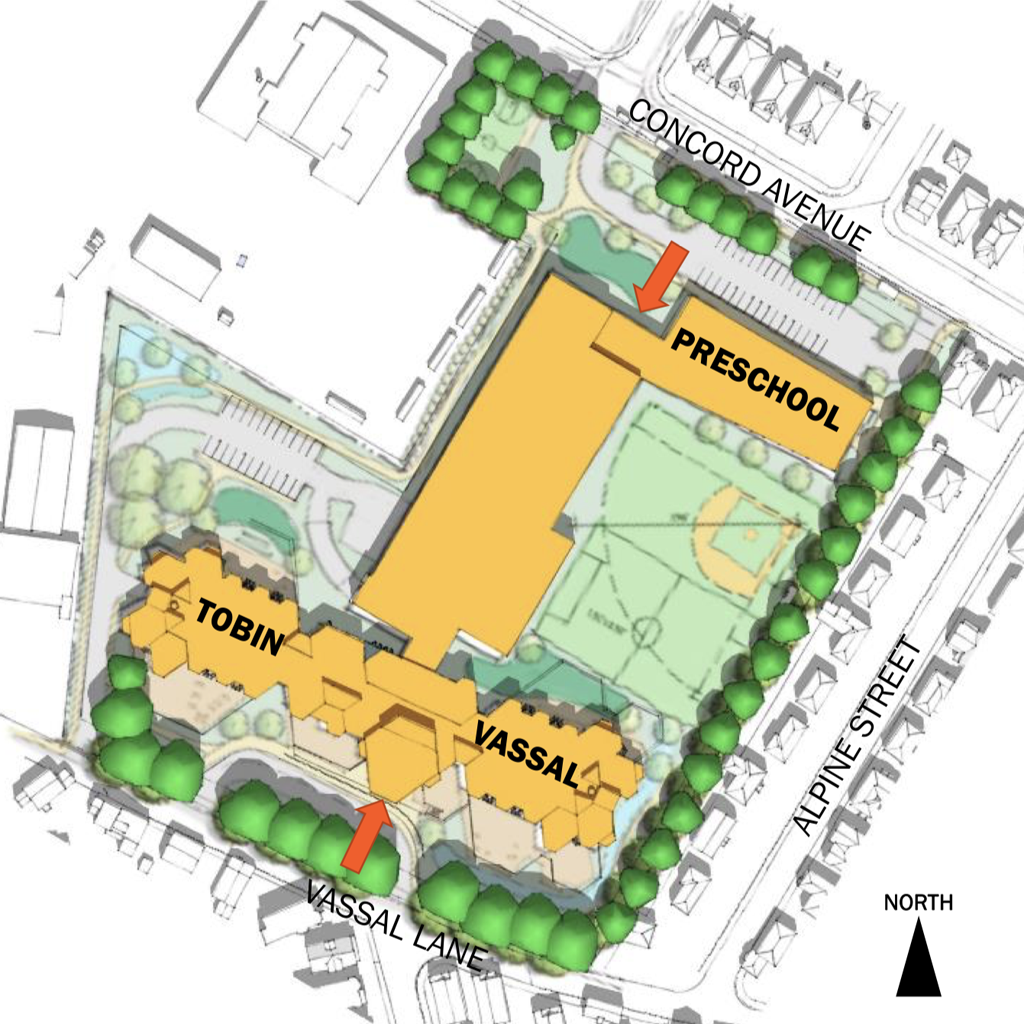 Renovation/Addition: Renovates the existing building, placing the Tobin and upper school at opposite ends. An L-shaped extension cuts through the center. The dual playing field is on the east side; there is parking on the north and west. 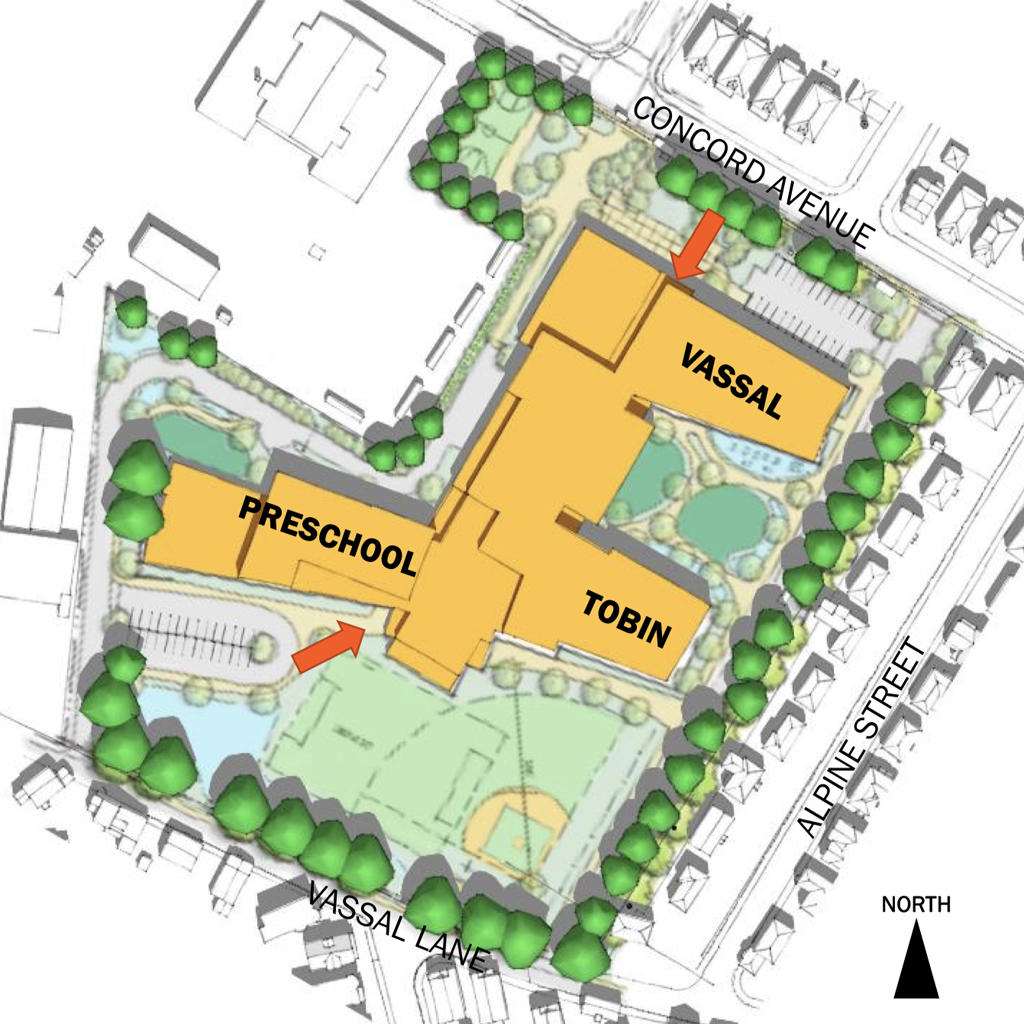 “Wings”: New construction, with a courtyard separating Tobin and upper school wings and the preschool branching out of the west side. The dual field is on the south, and parking is on the north and west. 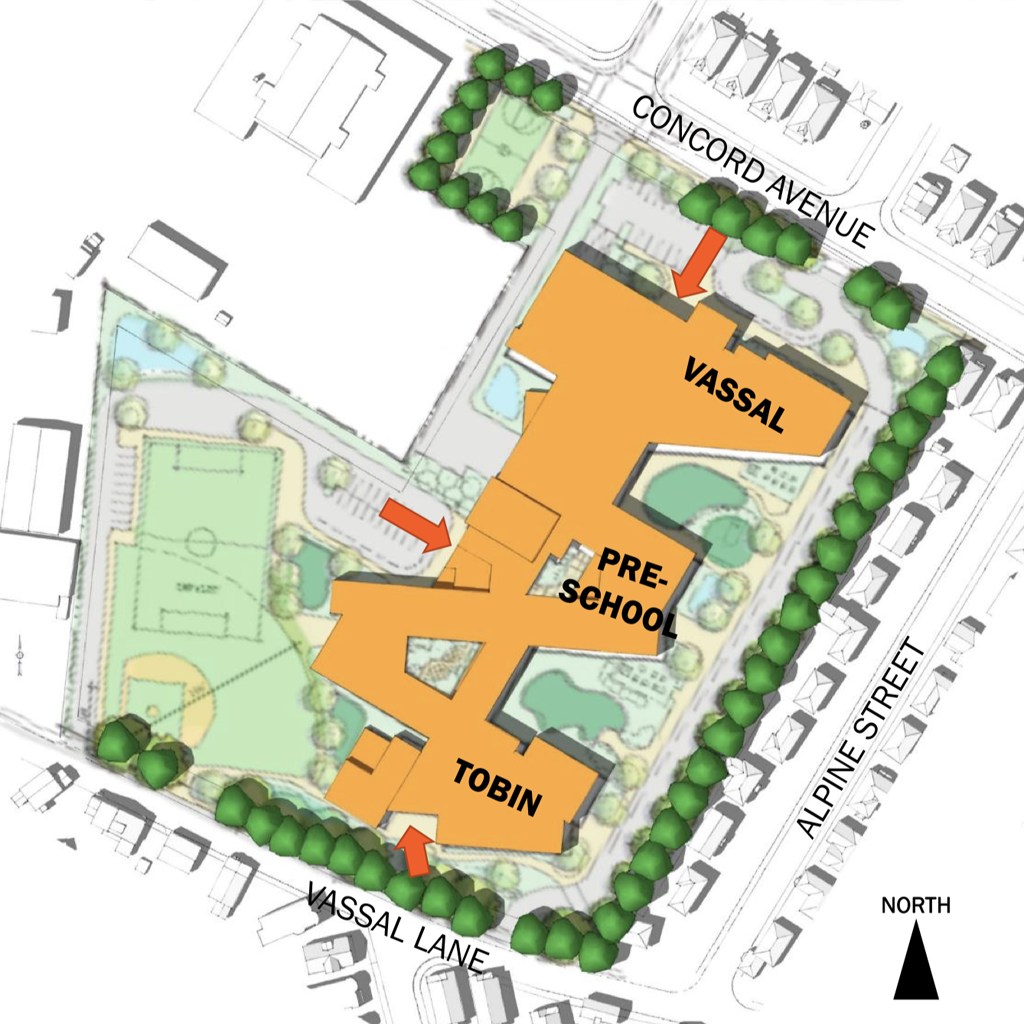 “Pavilions”: Gives the three schools separate “pavilions” on the east, with shared spaces massed behind them. The dual field and some parking spaces are on the west, with additional parking on the north.

Each design incorporate the same elements: a maximum of three floors set back from neighboring homes, with surface and underground parking. The plans try to accommodate staff increases with more than 50 surface parking spaces and 55,000 spare feet of underground parking.

Each design seeks to preserve at least five acres of outdoor space on the nine-acre site and replaces the Callanan playground, with its three overlapping baseball fields, with one overlapping baseball and soccer field – an idea that was strongly discouraged by McGovern, vice mayor Jan Devereux and city councillor Alanna Mallon. Several councillors favored turning surface parking spaces to play areas and adding to the underground parking, though the idea drew interest for preserving open space in general, not just to keep baseball fields open.

The goal is a net zero building with solar panels and possibly geothermal wells, a 1.25 million-gallon stormwater tank, bioswales and rain gardens, and the preservation of mature trees.

The estimated cost of the buildings is $250 million, but the final cost will depend on the final design and the site mitigation expenses. Clay was mined on the site for decades, and from the 1930s through the 1950s it was used as a municipal dump. Cambridge hired CDM/Smith, a geotechnical consultant, to evaluate the site’s geology, as well as the waste and its impact on water and soil quality, and the presence of hazardous materials and gases.

The new campus is expected to open in September 2024. Several officials, led by committee member Patty Nolan, asked if the project could be accelerated, but the complexity of the site makes it unlikely, said James Maloney, chief operating officer of Cambridge Public Schools.

The campus plans were pulled into the larger context of growing enrollment citywide, leading to Mallon calling for a full inventory of school facilities – needed especially if the city implements universal pre-kindergarten.

Maloney encouraged the School Committee to review program enrollment and assignment, noting that the mix of programs determines the class schedules and how space is used.

The City Manager’s Office extended the feedback period to Dec. 15 and will schedule a public meeting, the fourth, in December or January.

“We need the process to be inclusive and meaningful, or it’ll be hard to defend the final outcome,” McGovern said.