‘In Fabric’: That’s a killer dress you’ve got on, but the film around it unravels as we watch 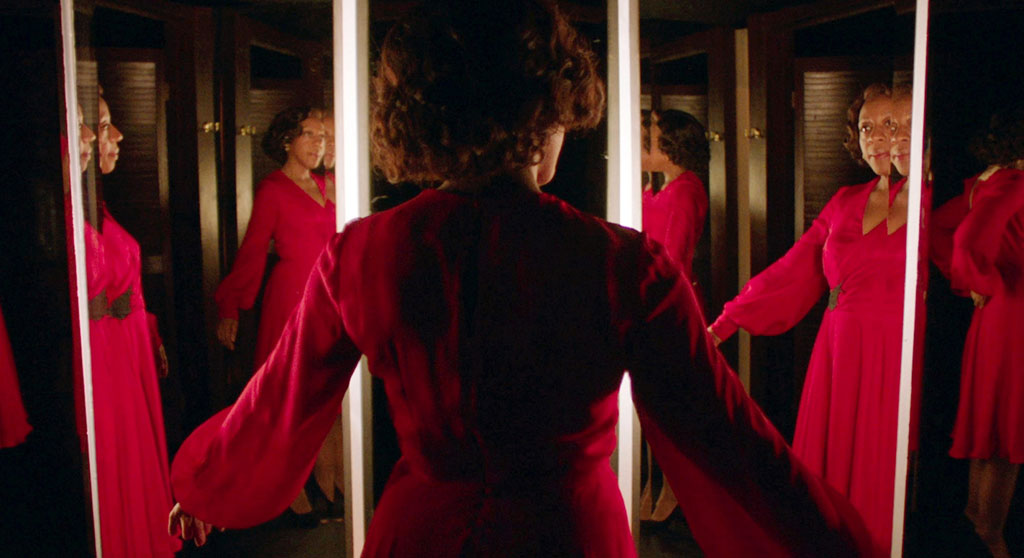 ‘In Fabric’: That’s a killer dress you’ve got on, but the film around it unravels as we watch

“In Fabric,” the latest arthouse horror offering from British writer-director Peter Strickland (“The Duke of Burgundy,” 2014, and “Berberian Sound Studio,” 2012), hems hard and long on its eerie, immersive style, but remains elusive when it comes to the what and why. Centering on a bloodthirsty “artery red” dress with supernatural powers and the department store staff/cult that sends it out into the world, “In Fabric” has the vibe of “Suspiria” sans the foreboding grip – because there we’re aware of what the cult is up to. 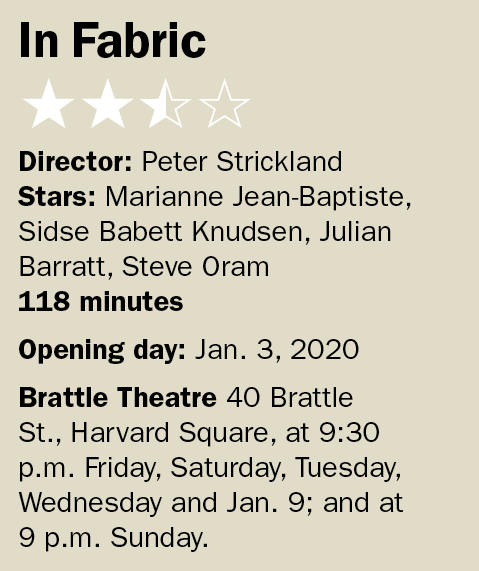 Like the recent “Waves,” “In Fabric” is told in two parts. In the first segment we meet Sheila (Marianne Jean-Baptiste), a bank teller and lonely single mother in her 50s looking to get her groove back after a divorce. A trip to a high-end boutique department store (think Lord & Taylor or Saks with a perfume wisp of the occult) nets Sheila the “risqué” red dress that she’s steered to by the freaky S&M head sales associate (Fatma Mohamed). At night, strange things go on: the dress floats menacingly about the house; Sheila, ever wandering herself, peers thorough a crack in a door to watch her son (Jaygann Ayeh) perform cunnilingus on his girlfriend (Gwendoline Christie); and down at the department store, the coven gather round a redheaded mannequin and writhe in orgasmic ritual.

There’s a lot of moody kink and a fantastic retro ’70s horror score by the techno group Cavern of Anti-Matter that helps bind the giallo homage together. Through paper clippings Sheila learns that the former wearer of the dress (the model in the catalog) died bizarrely (death by zebra, anyone?). Perhaps the scariest part of “In Fabric,” however, isn’t the killer dress but the higher-ups, white men who question their underlings’ intent and commitment constantly. In one scene, Sheila is called in by her superiors (comedians Steve Oram and Julian Barratt) who are concerned with the sincerity of her handshake and the amount of time she spends in the bathroom. It’s a shakedown of sorts in which the knife-twisting is all done with the “fuck you” politeness  demanded by British etiquette. In the latter chapter, a nerdy washing-machine repairman named Reg who dons the dress (Leo Bill) is humiliated by his ogre of a boss and pretty much everyone else, including Sheila’s managers, who pick him apart when he applies for a loan.

Themes of ritualistic consumerism and crowd mentality are embroidered in, but so ostentatiously and without satirical substance that they feel like cheap window dressing, especially when measured against George Romero’s great “Dawn of the Dead” (1978), which proves a much more devious and effective take on constant consumption. Even as plot developments trend toward the silly, Strickland remains focused on his spellbinding effect – and not enough can be said about the vulnerable, no-nonsense approach of Jean-Baptiste (of Mike Leigh’s “Secret and Lies”). When she’s on screen, she keeps the outré tale from unraveling. “In Fabric” is a unique experience best taken in with logic left at the door.