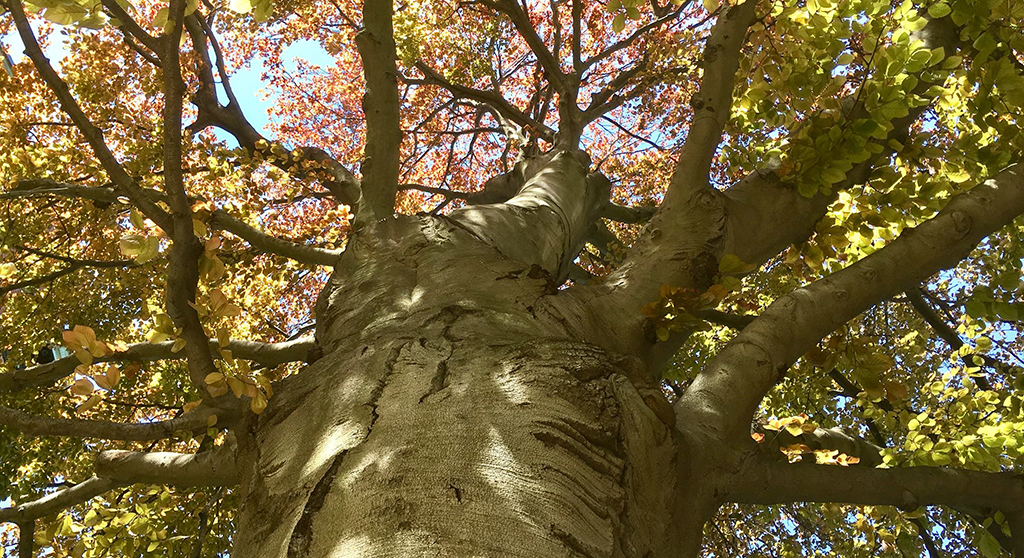 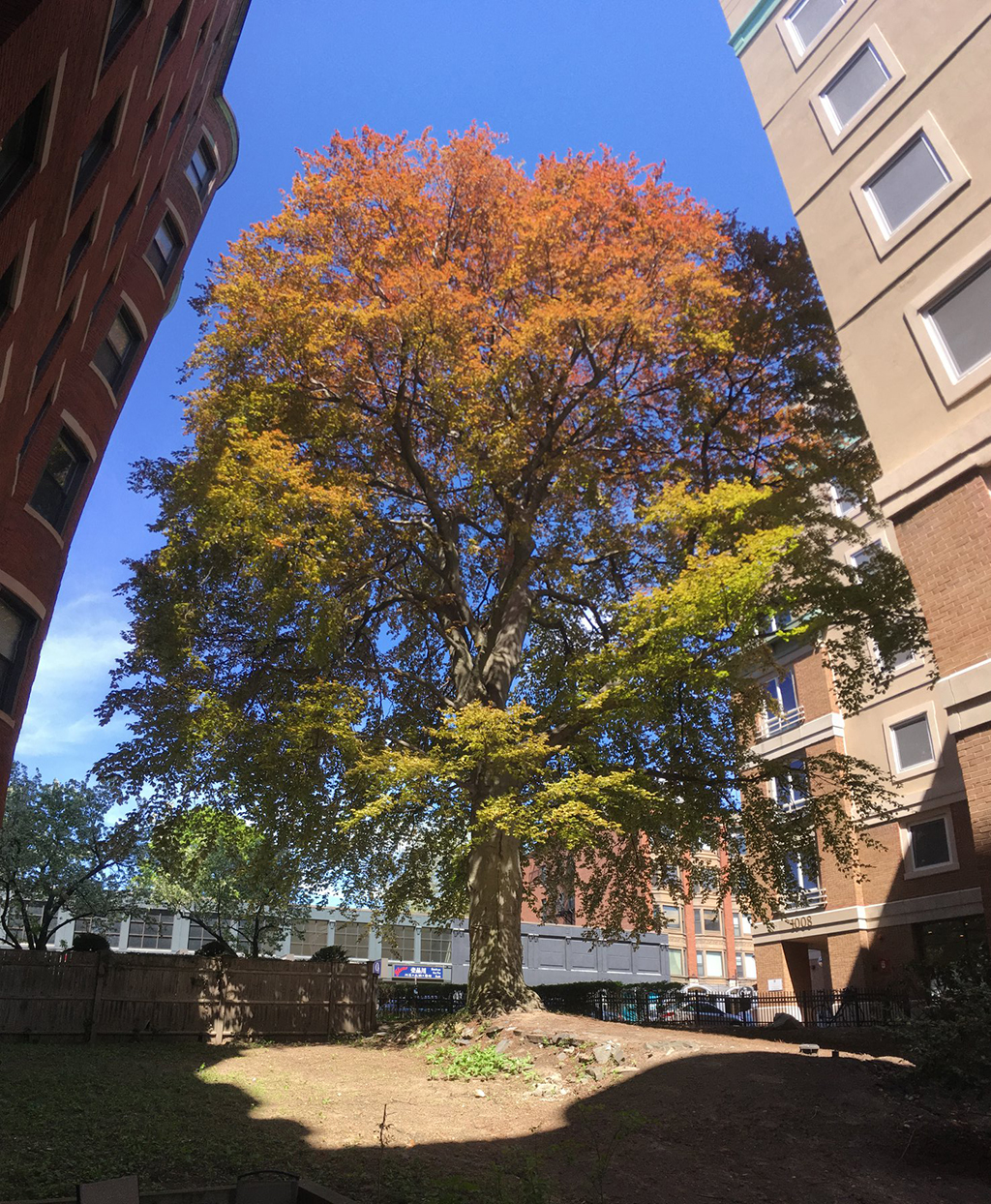 The copper beech at 1008 Massachusetts Ave., in the Riverside neighborhood on the outskirts of Harvard Square, is the only landmarked tree in Cambridge. (Photo: Green Cambridge via Facebook)

The City Council’s Health and Environment Committee holds a public hearing Wednesday to begin discussing possible amendments to the Tree Protection Ordinance – as suggested by the Urban Forest Master Plan Task Force report that was released in November. Also on the hearing agenda is a policy order to extend the temporary moratorium on removing healthy, significant trees through the end of 2020 to allow time for the law to be updated. Otherwise, the moratorium is set to expire Feb. 25. Lifting the moratorium before stronger tree protections are in place could have a devastating impact on the canopy.

The No. 1 priority for climate action at the local level is prioritizing through policy and action a deep sense of collective responsibility of these 4,500 acres in Cambridge we all share. We can do that by reconnecting with each other as a community as we reconnect with our local environment. While behavior change and technological advances have undoubtedly begun to tweak existing socioeconomic and infrastructure systems in the right direction, the creation of an everyday resilience deeply tied to our land by broad-based cultural engagement with local ecological cycles is our ultimate path forward through this long emergency we face in our changing climate. Our urban forests, no matter whose property it grows from, are cornerstone to this effort.

The Tree Protection Ordinance is critical because it gives us space to work and take recommendations in the excellent task force technical report and find an agreed-upon method to implement them. The top-level strategies in the report were clear: curb the loss of trees and grow the canopy. We can’t do either if the ordinance is allowed to expire.

A thriving tree canopy is critical to building Cambridge’s resilience to climate change, especially to combating the projected increase in temperatures and duration of heat waves and the heat island effects of urbanization. Not only do trees bring cooling shade to neighborhoods and absorb stormwater, but they sequester carbon. A thriving canopy complements the city’s priorities on increasing  safety and walkability, it promotes street-level retail and improves public health outcomes for children and seniors. Trees create inviting, usable open spaces around housing and parks across all neighborhoods. Residents strongly support these priorities: Once again, planting trees was the top vote-getter in the Participatory Budgeting process this year.

Extending the moratorium is necessary, in part, because the release of the task force report was delayed; the report had been expected by midsummer, but was not ready until November. The delay was due to the fact that the task force process was far more comprehensive and complex than originally anticipated – a good thing – but the findings and recommendations in a 300-page report, plus 700 pages of appendices, will take more time to digest and more council and community discussion. To note, the current moratorium has not entirely stopped the removal of trees; as of early November, 298 permits had been granted for the removal (mostly) of dead or dangerous trees (out of 349 applications). Public tree hearings have been held for the removal of more than two dozen healthy street trees, and their removal has been permitted.

The task force report underscores the importance of stopping canopy loss, which has averaged 16.5 acres annually since 2009. The 26 percent canopy in 2018 could decrease to 20 percent or less by 2030, if no action is taken to prevent loss and plant more trees.

The report also highlights the importance of protecting trees on private property, where 58 percent of the canopy is, and where 72 percent of the loss since 2009 has been, most as a result of development.

Further, the report shows that restoration of a healthy canopy (getting back up to at least 30 percent) cannot be accomplished simply by planting thousands of trees in the public right-of-way. Rather, we will need to engage and enlist the cooperation of all property owners, educational institutions and the state Department of Conservation and Recreation in a sustained, all-hands-on-deck campaign to protect and restore our canopy.

Finally, the report concludes that we will need a stronger Tree Protection Ordinance and that it should be integrated with the ongoing work of the Climate Change Resiliency Zoning Task Force, the 2020 Bicycle Network Plan and a five-year street and sidewalk plan. The consultants recommend that all property types should be subject to the ordinance, that the current definition of a “significant” tree should be broadened and that our oldest, largest (“heritage”) trees should have special protections. It recommends that the mitigation fees for a voluntary removal should not be the same across the board, but should be proportionally higher for larger trees, and the ordinance must require not only financial mitigation, but also must incentivize replanting of large trees.

The report also suggests finding a mechanism to use tree removal mitigation funds to replant on private property possibly by creating a privately funded and administered Tree Trust.

Green Cambridge has been an active advocate and partner in the development of the Urban Forest Master Plan. We are excited and eager to continue to play a major role in public outreach and education to implement its recommendations by working directly with the city’s Department of Public Works and community partners such as Cambridge Rindge and Latin School to prototype planting programs in the urban forest; by having our board members serve on the master plan committee; and by kicking off the Heritage Tree program last summer.

But first, we hope that the City Council will vote unanimously to extend the moratorium through 2020.