‘Mandy’: Hunting for revenge in the woods from hell raisers that forced him to see red 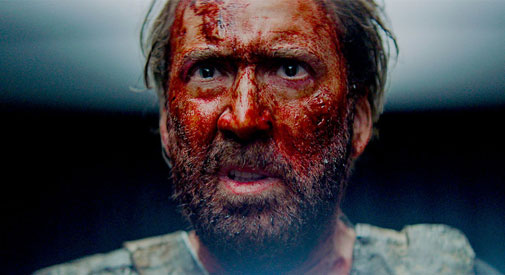 ‘Mandy’: Hunting for revenge in the woods from hell raisers that forced him to see red

Barry Manilow’s timeless classic will never sound the same after you drink in this midnight cult curio that’s the bloody union of arthouse horror and a bad ’70s head trip. You can already stream it for a fee on Amazon, but the rich artistic palette of red and black (it would make a wicked, stomach-churning double feature with the recent “Suspiria” reimagining) and Nic Cage’s gurgling snarls are best suited for a full, immersive theater experience. “Mandy” is wicked mayhem that’s certainly not for all, and the unwary curious will undoubtably have to avert their eyes during the graphic scenes of ritualized sacrifice, but it’s getting served up regardless for a three-day weekend run at The Brattle Theatre starting Friday (late-night shows only). 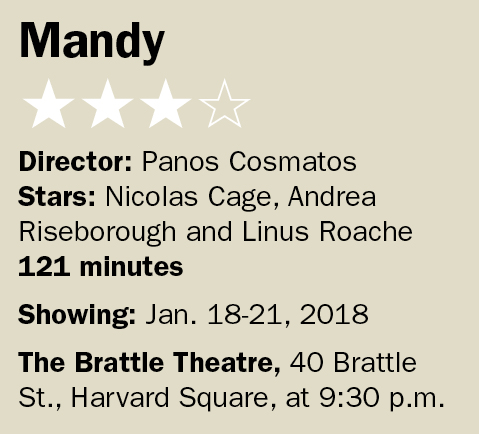 Shot in Brussels, but ostensibly taking place in the cold, remote hills of someplace like New Hampshire in the early 1980s, “Mandy” pulls on a battery of horror-genre tropes without feeling ersatz or anemic. Much of that’s due to Cage’s overstuffed performance and director Panos Cosmatos’ relish for revenge, rage and raw imagery. Like “Last House on the Left,” Cage’s Red Miller and his gal – the subject of the inspired title – Mandy (Andrea Riseborough) are a relatively chill couple living a spare simple life out in the woods. He logs, she’s an artist. But one day the leader of a nomadic cult known as the Children of the New Dawn (Linus Roache, from TV’s “Vikings”) catches a glimmer of Mandy and decides he wants “that.” The baddie here doesn’t have a cool name like Silas (like the cult leader from recent Nicole Kidman cop drama “Destroyer”) but Jeremiah Sand – perhaps uninspired names and titles are a means to lull before the spectacular Grand Guignol to come? But he’s far more the real deal when it comes to the macabre, be it mad, prophetic pontifications or slow, bleed-out crucifixions. Needless to say, Jeremiah, his followers and a loyal pack of S&M-clad minions whipping through the woods on dirt bikes and ATVs get their hooks into Mandy, which naturally sets off Red.

Cage is perfectly over the top as the distraught, rampaging force of nature, and Cosmatos (his late father, George, directed the neo-classic western“Tombstone”) articulates every arterial spray and flesh-piercing plunge with prolonged, agonizing effect. Cinematically, the lush, dark camera work by Benjamin Loeb and the haunting score by the late Jóhann Jóhannsson, whose CV includes “Arrival,” goes far to sell the delectably gonzo bloodbath.  Between brutal beatdowns and bind-torture tie-ups, there’s a smattering of hallucinogenic drug trips (most not taken by choice)  and plenty of death metal to underscore the backwoods mayhem. If that’s not enough, there’s sword fighting with chainsaws, with one opponent wielding a woefully undersized blade. The political or theological agenda of the Children of the New Dawn is never clear, but that’s beside the point; like “Suspiria” or “Race with the Devil” (1975), it’s all about giving it back to the occult freaks so gleefully demonic and drenched in innocent blood.

Between Red’s acumen for bloodletting and Cosmatos’ pushing of boundaries in glamour gore, “Mandy” is poised for near-instant cult classic status. Sadly, not enough time’s allotted to Riseborough, who’s in something of a breakout season with this, “Nancy” and “The Death of Stalin.” The film revolves around her, though she’s never really here. And then there’s that Manilow song; go see “Mandy” and then cue up Barry’s song and see if its texture, tone and tenor isn’t knocked off its old familiar base.