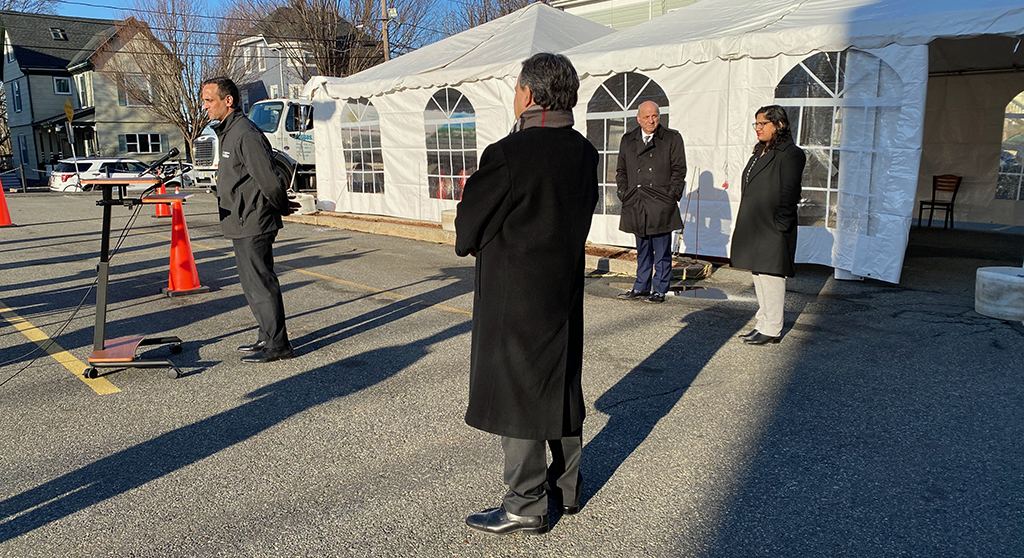 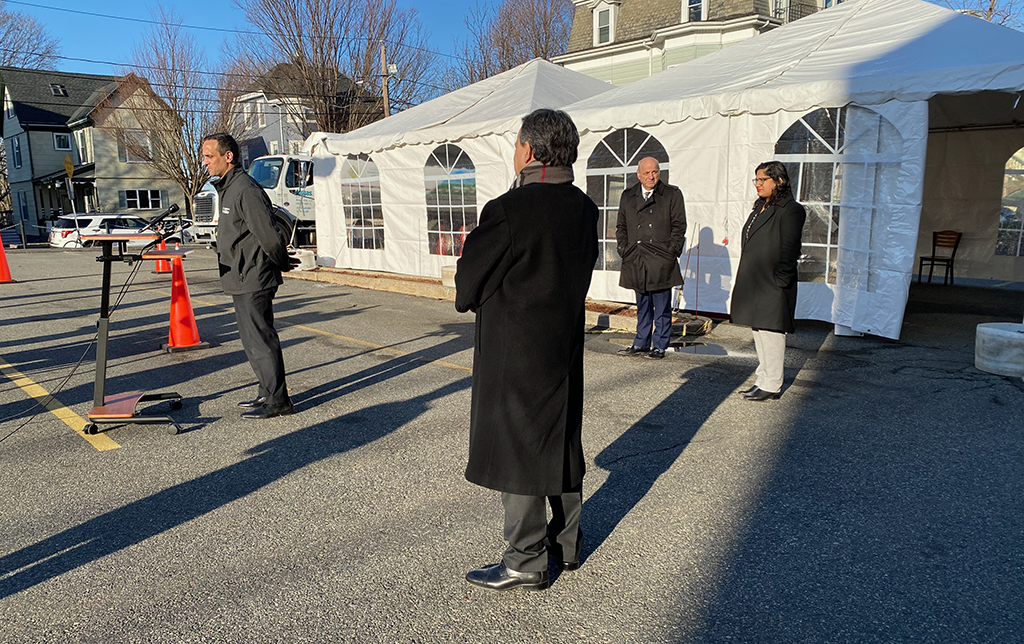 Cambridge Health Alliance opened a mobile testing site for the Covid-19 on Wednesday – a tent in a parking lot at CHA Somerville Hospital – and officials said two more mobile testing facilities for the coronavirus would start operating in the next several days. For the time being, only Alliance patients with symptoms of the virus such as cough, fever and shortness of breath will be able to get a test, said Dr. Assaad Sayah, chief executive of the Alliance.

Separately, the Cambridge Public Health Department announced Wednesday that a person in their 20s has Covid-19, the eighth Cambridge resident to test positive. The office of Mayor Joe Curtatone in Somerville said there are six people confirmed with Coronavirus in that city as of Wednesday evening.

At a morning press conference opening the testing site, Sayah did not say where the next two sites would be or exactly when they would open. The Alliance has hospitals and clinics in Cambridge, Somerville, Everett, Revere and Malden. Eventually CHA will offer testing to the public, not just Alliance patients, Sayah said.

The health care system is “still evaluating locations and launch dates for the other testing sites,” its spokesman, David Cecere, said later. 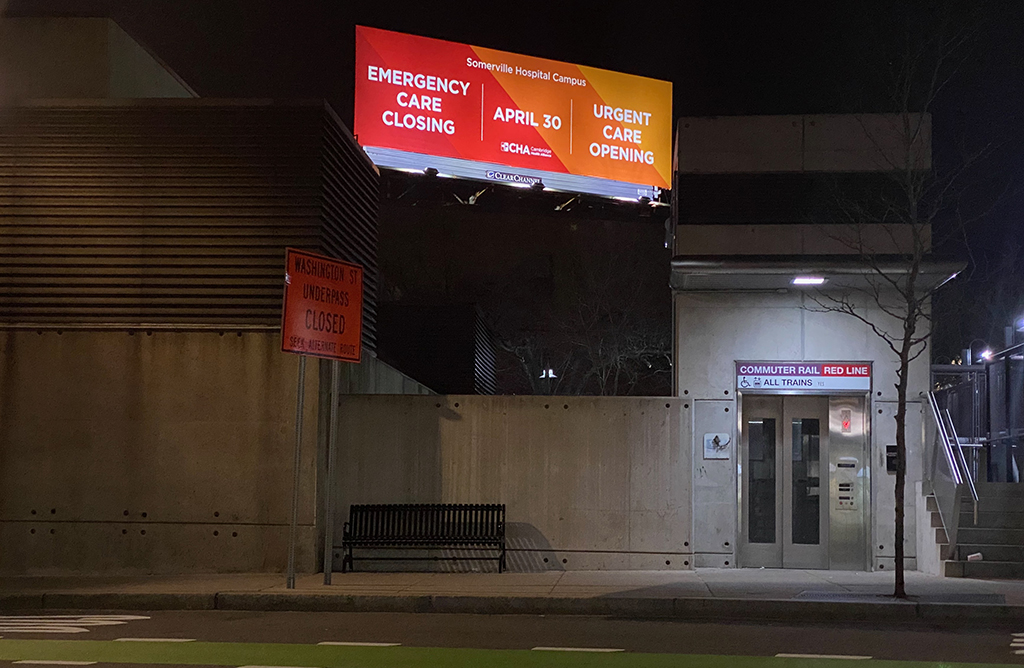 A billboard announces the closing of the emergency room at CHA Somerville Hospital, a move made less certain by a viral pandemic. (Photo: Mac Levy)

In light of the coronavirus crisis, the Alliance is also weighing whether to go ahead with its controversial plan to close the Somerville Hospital emergency room April 30. “We are evaluating it on a day to day basis,” Sayah said. Last month, Cecere had said the closing would proceed, with the space being used for an urgent care clinic open 9 a.m. to 9 p.m.

The tent test site is part of an elaborate system to separate people who may have the coronavirus from other patients, to protect not only the uninfected but health care workers, Sayah said. He said patients who call the Alliance would hear a recorded message in which one of the choices was to press a number if they had Covid-19 symptoms.

Those who pressed that number would have their call directed to a “triage center” at the Alliance’s Broadway primary care clinic in Somerville, where clinicians would question them by phone for more details on their symptoms, Sayah said.

Depending on the severity, patients would be told to stay home – “most of them,” Sayah said – get a test at the mobile site, come to a respiratory clinic at the Broadway clinic for an in-person assessment or go to the emergency room, he said.

As of Wednesday afternoon the recording had not changed and did not mention respiratory symptoms or Covid-19.

Officials said the mobile site could do 80 tests a day as of Wednesday, but the number is changing daily. The site will be open from 9 a.m. to 3 p.m. seven days a week. Patients who show up at the parking lot without an appointment will be sent to another tent on the site and asked to call the triage clinic, Sayah said.

About 55 people were tested Wednesday, spokesman David Cecere said after the site had closed for the day.

It will take only seconds to collect a sample from patients, and they won’t have to leave their car, Sayah said. (He said the testing facility will also serve people arriving on foot, but later Cecere said those patients will be sent to the respiratory clinic at the Broadway center.) Results should be available in two to four days, Sayah said. The Alliance is sending the samples to LabCorp, one of the big private laboratories that is now offering Covid-19 testing, CHA infectious disease specialist Lou Ann Bruno-Murtha told city councillors Monday. At the same meeting, Sayah said the Alliance is developing the capacity to do the testing itself.

Besides funneling patients suspected of being infected to a limited number of areas, the new service will increase the number of people who’ve been tested at a time doctors and public health experts say many more tests are needed. With more testing, officials responding to the pandemic will know better how many people have the virus and where they are, permitting them to target efforts to prevent the spread of the disease.

Like other hospitals, the Alliance is finding it difficult to get enough face masks, gowns, goggles and other equipment to protect its workers from infection. Sayah said CHA now has a stash of one week to two weeks on hand. “That’s not good,” he said, but it’s better than last week, when the supply would have lasted just three days.

The Alliance has posted a plea for donations of personal protective equipment on its website, asking for N95 masks, paper masks, paper gowns and used or new protective glasses. Donors can drop off the items 24 hours a day with security guards at its hospitals in Cambridge, Everett or Somerville, the message said.

CHA is also asking patients not to walk into clinics without an appointment or go to the emergency room with mild symptoms in search of a test. Patients should call their doctor if they have fever, cough or other flulike symptoms.

At Cambridge Hospital, no one is allowed to visit emergency room patients or patients admitted to the hospital except if the patient is a woman about to give birth, or a child. Only the woman’s partner can visit, and for children and teens in the psychiatric unit, only one parent or guardian. Some exceptions may be made to these rules, such as for patients who are dying, the Alliance said.

Visitors are not allowed in any case if they have traveled in the past two weeks or been exposed to someone who has tested positive for the coronavirus, and health workers may also screen visitors for signs of illness.

CHA is also postponing some elective procedures and rescheduling some routine doctors’ visits.