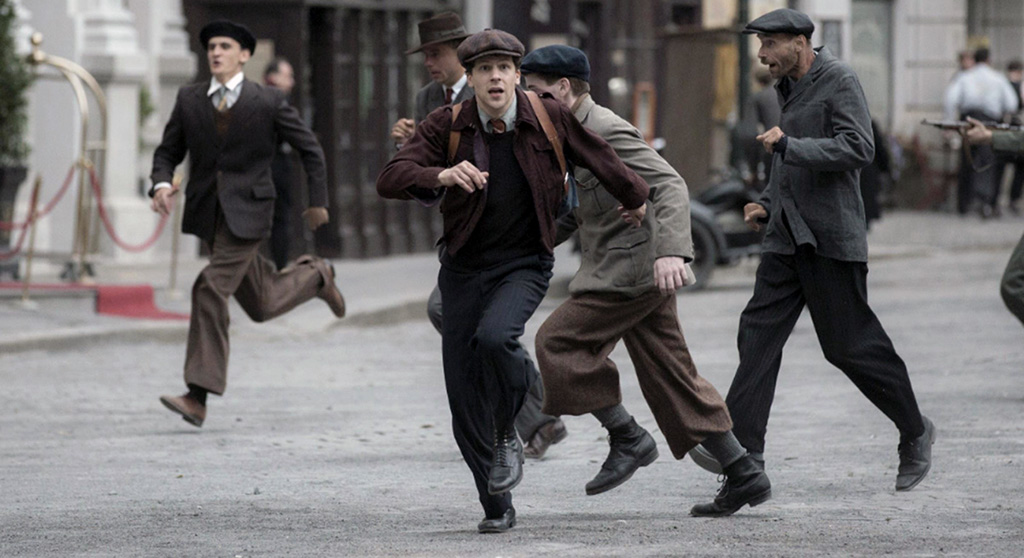 Many know Marcel Marceau as one of the greatest mimes who lived, but he also was also part of the French Resistance during the Nazi occupation of France, helping hundreds of orphaned, mostly Jewish children escape to Switzerland. His father was Jewish and as the film “Resistance” has it, none too keen of his son wanting to be like Charlie Chaplin, calling him “a useless bum who wants to be a clown but has the muscles of a ghost.” His father, a butcher, would end up being put to death in a concentration camp, and Marcel would change his last name as he and his brother joined the fight.

Jonathan Jakubowicz’s self-important film is framed with Gen. George S. Patton (Ed Harris) citing Marcel (Jesse Eisenberg) for his heroics to a crowd of U.S. soldiers after the liberation of France. It’s an awkward, out-of-place device – as is much of the film awkward. Harris, normally dead-on in his male bravado, is a mouse stepping into George C. Scott’s shoes, and Eisenberg, while game, struggles with the subtlety of mime and the nuance of an actor feigning composure under the masochistic boot of Klaus Barbie (a scene-chewing Matthias Schweighöfer, a pleasing, malevolent distraction) trying to shake down an escape plot. The film’s told with a Holocaust thriller edge, yet it never quite thrills nor enlightens, especially given the rich historical material at hand.

Just what drives Marcel – or Jakubowicz’s plot – is hard to say. He’s so enamored with Chaplin and breaking out as a performer, it’s hard to know if protecting children or a way of life is more important. Then there’s the sullen but determined Emma (French actress Clémence Poésy), who’s in on the cause and a romantic interest; many of these seeds never fully sprout, leaving the realization of Marceau and his legacy as something of a muddled miss.

Jakubowicz’s choice of title is austere but irrelevant. Yes, Marceau served in the Resistance, but the movement and his time in it are not the film’s major thrust, making it another aspect of the film that raises more questions than it ever answers. One of the very best films (if I may suggest) about the French Resistance is Jean-Pierre Melville’s dark and daunting “Army of Shadows” (1968). Due to the famous May 1968 civil rebellion against the presidency of Charles de Gaulle, the film, with its favorable portrayal of de Gaulle, was not widely embraced; it didn’t get a theatrical release in the United States until 2007. It’s well worth seeking out.

Available on iTunes, Amazon and other platforms where movies can be rented individually for streaming.