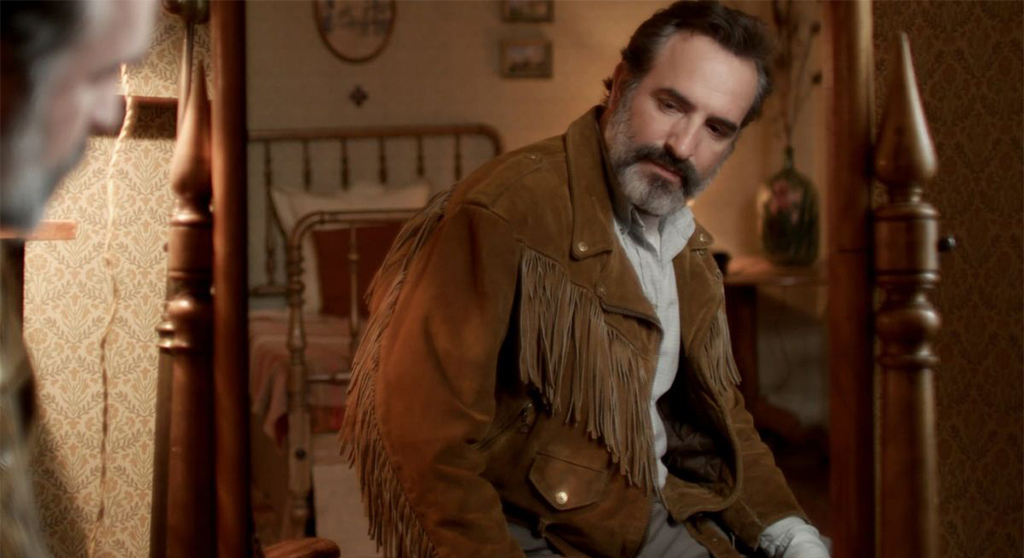 A trippy arthouse horror film that’s tedious and arousing at the same time – what would one expect from the director who made “Rubber” (2010), a dark comedy about a homicidal tire that goes on a killing rampage? This one’s about a suede jacket made of (can you guess?) deerskin and its obsessive owner (Oscar winner Jean Dujardin), who appears adrift and in need of direction. Once he gets it, the outré drama set in the alluring French mountainside turns très dark as bodies quickly start to pile up.

About halfway into “Deerskin” you begin to wonder if the protagonist, Georges, is mad, and perhaps an unreliable narrator. He does pay 9K for the fringed garment of the title, which doesn’t quite fit (too small) and, as part of the odd deal (the old coot who sells it to Georges is played by Julie Delpy’s father, Albert) gets an antiquated video camera. From there, the content yet forlorn Georges settles into a nearby hamlet where he postures himself a filmmaker and quickly makes the acquaintance of a young bartender (Adele Haenel from “BPM” and “Portrait of a Lady on Fire”), an unemployed film editor – talk about convenient circumstance.

To echo the internal malaise of Georges, director and cameraman Quentin Dupieux (also writer and editor) shoots everything in flat, washed-out hues. We’re informed early on that Georges has been spurned by his wife and left destitute, but we’re given little else to go on. Dujardin, who rolled to international fame with the 2011 silent-era Oscar winner, “The Artist,” bears the weight of the world as Georges, with eyes that are sad, heavy and weary; they also show flickers of devious inner workings. It’s a performance that carries the film through the meandering buildup, but as gears shift, Dujardin’s nuance gets submerged in the bloody boil of black comedy. There are scenes at night when Georges lies in his boardinghouse bed and talks to the jacket – and it talks back. Yes, we are in the slightly surreal realm that made “In Fabric” (1918) a lingering curiosity, but Dupieux, who moonlights as a techno-pop star, can’t fully rectify the character study of Georges with the rushed, final bloody pages. Haenel’s bartender-turned-collaborator is a game player, and deepens the stakes. She’s no waif in waiting, but a strong observer who’s onto Georges. Their collaboration on Georges’ macabre footage is unfortunately far too brief. A similarly themed curio, “Man Bites Dog” (1992) had a film crew following a serial killer on his weekly hunts. It was dark, devilish and a biting reflection of society’s obsession with grim happenings. Here those moments go by in a fast-forward montage. Questions linger and burn, and only the napped suede jacket seems to know the answers.

This is a Virtual Screening room rental from The Brattle Theatre.

‘True History of the Kelly Gang’: In the outback for a bloody, convoluted crime tale, clad in tulle