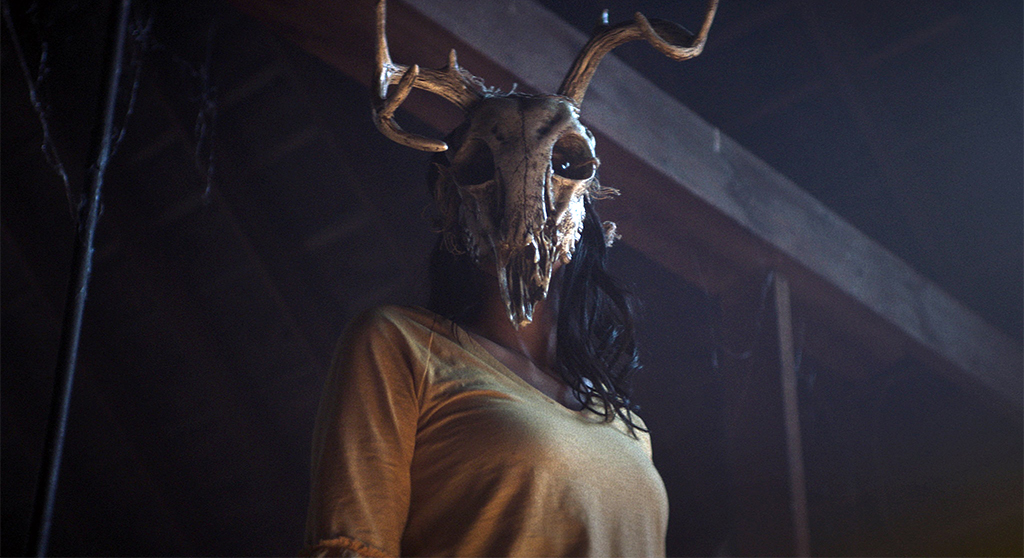 The film begins with a sharp hook as a babysitter, arriving at a home for her shift, can’t find her charge but hears strange noises in the basement – the kind of flesh- and bone-crunching noise that says “Don’t come down here.” But she does. (Not that she sees it, but the basement door bears an occult symbol.) From that happy opener we rewind five days as we settle in with Ben (John-Paul Howard), whose life as a young teen (his parents are recently divorced, and he’s making youthful forays into romance, or not) is more interesting than the freaky shenanigans of Abbie (Zarah Mahler, who does demonic effectively enough), his next-door neighbor who skulks about at night in silk gowns with an evil glower in her eye. Ben doesn’t pay her wacky wanders too much attention at first. Then her son, Dillion (Blane Crockarell), terrified of his mother, comes running to Ben one night.

The film, written and directed by Brett and Drew T. Pierce (billed as the Pierce Brothers, who collaborated on “Deadheads,” a zombie flick that has nothing to do with the trippy 1960s rock band) slide into “Stranger Things” territory as Ben does some googling about witches of the woods and finds a strange, gnarled tree with an underground lair. As things hit their gory, blood-splattered crescendo, the Pierce lads pull in as much as they can from the classic goo-steeped transmutation scenes in “Alien” (1979) or “The Thing” (1982) – which those films did better. The big miss here is Ben’s angst-filled existence in a township of privileged jerks, bullying jocks and elusive coeds out of his league. In one such scene, a comely partygoer entices Ben into the pool and coerces him to get naked, only to have the intimate moment quickly exposed for what is: a planned group prank. Then there’s Ben’s relationship with Mallory (Piper Curda), a coworker at the local marina; their late-night phone calls as Ben spies on Abbie are more compelling in what they say about each other and the character of the town than the weirdness Ben is drinking in. “The Wretched” feels like a melding of two films: one I’ve seen ad infinitum, and another that begs empathy and intrigue.