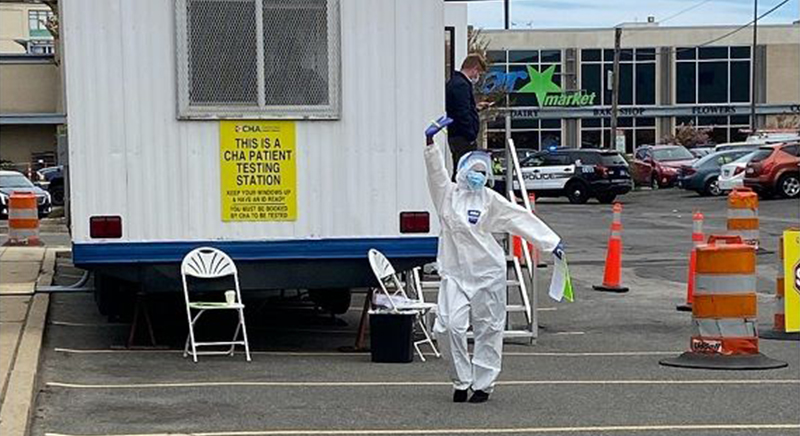 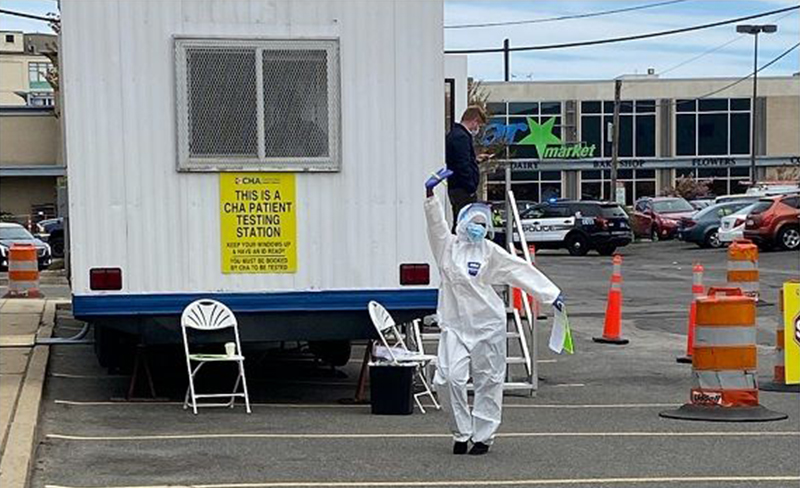 The East Cambridge site that offered free Covid-19 tests to Cambridge residents since May 8 will close Friday, the city abruptly announced Monday. Testing will continue once a week in The Port, North Cambridge and a third location that’s yet to be announced, Chief Public Health Officer Claude Jacob said.

Jacob said the city’s performance in testing and controlling the spread of the virus stood out in relation to nearby communities. “Cambridge continues to look very strong, “ he said, citing the city’s high testing rate – the number of tests per 100,000 population – and its low percentage of people who test positive, which he said was 6.4 percent as of June 17. According to the state health department, more than 15,200 residents had been tested as of that date, for a rate of 13,509 tests per 100,000 population.

The percent of people testing positive in Somerville was 8.75 percent; in Arlington, 9.38 percent; Boston, 18 percent; and Chelsea, which Jacob called “really the hotbed of these activities … they’re currently at 37 percent.”

But the Cambridge Public Health Department does not track a statistic called Rt that measures the transmission rate of the virus, or the number of people who can potentially be infected by each person who tests positive, Jacob said in answer to a question from Councillor Patty Nolan. Nolan said Massachusetts has the lowest Rt rate in the United States and asked Jacob for the Cambridge figure, calling the number “a key rate.”

Epidemiologists look for a transmission rate below 1 to show that infection spread is under control. A website that tracks the rate, Rt.live, says the state’s rate was 0.67 as of Monday. According to the site, the state’s rate dropped below one in early April.

Jacob said it would be “very difficult” to estimate Rt for Cambridge alone. “I can look into it,” he said.

The Cambridge Health Alliance is the agency that has operated the East Cambridge testing site next to its Gore Street clinic. It also is offering tests at a parking lot near its former Somerville Hospital and in Malden. The Somerville site opened first, on March 18, and restricted testing to CHA patients only at first. It expanded to offer tests to any Somerville resident starting the week before the Cambridge site opened.

Alliance spokesman David Cecere said CHA is also closing its Malden testing site Friday. Cambridge residents and people who live in other communities it serves, including Somerville, Malden, Medford, Revere, Chelsea, Everett and Winthrop, can get tested in Somerville, he said. The health care system has seen “declining utilization” of the East Cambridge site in the past few weeks, Cecere said, although there was an uptick last week from Cambridge city employees and people who participated in anti-racism demonstrations, he added.

This month, the city health department conducted two weeks of testing in The Port and one week in North Cambridge. The department says these neighborhoods are “hot spots” for the virus because of a relatively high number of cases or infection rate. Jacob said the third site for testing will be disclosed by the end of this week; previously Jacob said Cambridgeport is a hot spot.

In related news, the city’s case count for Covid-19 on Monday showed an unusual drop in infections – to 1,078 on Monday from 1,082 cases on Sunday. (Jacob gave a different figure at Monday’s council meeting: 1,081).

The Public Health Department had no immediate explanation for the decrease, but in the past, spokeswoman Susan Feinberg has said the total can shrink if the department finds out that someone identified as a resident actually lives in another community. Still, the drop of four cases was split evenly between people living in the community and people living in nursing homes and assisted living facilities, and it was hard to understand why two long-term care residents would turn out to be living somewhere else.