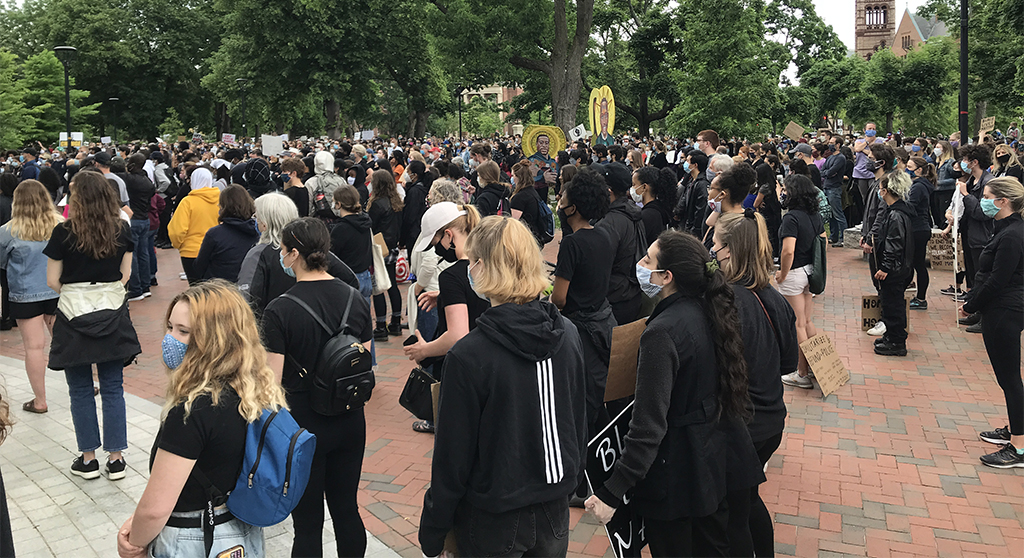 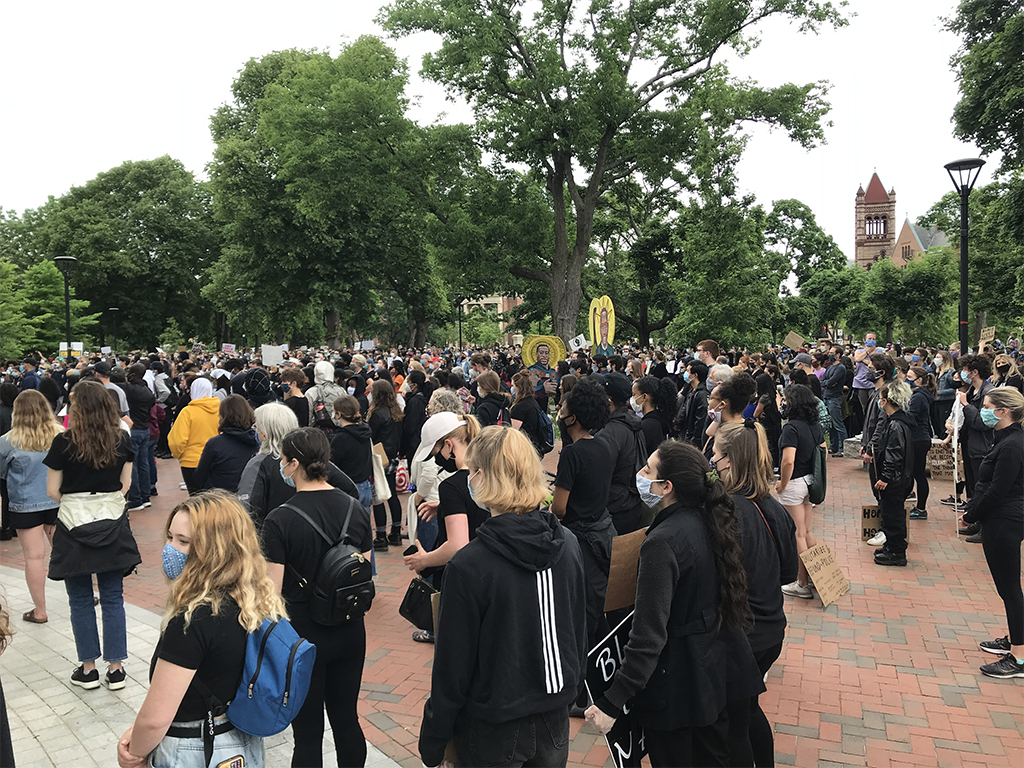 After weeks of confinement against coronavirus, thousands gathered June 7 on Cambridge Common for a protest against police brutality and systemic racism. (Photo: Tim Plenk)

The Cambridge Health Alliance is offering free Covid-19 tests this week to people who attended large anti-racism rallies in the past two weeks, as part of the state’s campaign to prevent spread of the virus from the close contact among thousands who gathered on Cambridge Common on June 7, Boston and elsewhere.

Testing are available Wednesday and Thursday from 9 a.m. to 7 p.m. at CHA’s tent on Gore Street in East Cambridge, as well as at the Alliance’s mobile testing sites in Somerville and Malden, spokesman David Cecere said. He said Cambridge residents continue to be offered testing on any weekday “but [we] encourage people involved in mass demonstrations to be tested on those two days.”

“We ask people to make an appointment, but walk-ins will be accepted,” Cecere said. The phone number for appointments is (617) 665-2928. Those who don’t have an appointment may wait longer, according to the CHA website.

The city has offered free tests to residents, and now city workers and day care employees, at the Gore Street site. It has also tested about 4,000 residents and workers in nursing homes and assisted living facilities, public housing developments for seniors and at sites in “hot spots” with a high number of cases or a high number per 10,000 residents: The Port neighborhood and North Cambridge.

Chief Public Health Officer Claude Jacob told city councillors Monday that Cambridge has one of the highest community rates of tests per 100,000 population in the state, and one of the lowest percentage of people who test positive, a sign that the city’s strategies are working to curb transmission of the virus. “Based on the work on the ground compared to other communities, we are doing very well,” he said.

Still, councillor E. Denise Simmons has prodded Jacob and City Manager Louis A. DePasquale to schedule more testing in The Port, where she said some residents didn’t know about the program until the two weeks of testing had ended. According to Jacob, not one person out of the total of 212 who got tested there were positive for the virus.

Jacob said Monday that the public health department is planning “to provide access to Covid tests on a rotating basis at designated locations and focus on the needs of the hot spots.” This is in line with Simmons’ request to rotate the testing site weekly, he said. Details haven’t been worked out yet, Jacob said.

Some experts have said demand for viral tests will decline when the prevalence of infections is low, as it is in Cambridge. They have also said that ramping up the number of tests isn’t as important in that situation as it would be if there were big outbreaks in a community. Jacob said the city is not conducting antibody tests, which show whether a person has been infected in the past. Some epidemiologists have said repeated antibody testing is more useful than viral tests to monitor the reopening of the economy.

In another development, Jacob disclosed that 60 of the 95 people who have died of Covid-19 were white, and 11 black. He said more racial information on deaths is coming, and health department spokeswoman Susan Feinberg said the data will be included in the city’s daily Covid-19 case updates Wednesday or Thursday.

Jacob said the number of white people who died “mirrors the long-term care facilities,” which account for 70 of the 95 deaths. But Cambridge’s three nursing homes have varying percentages of black residents, according to a Brown University database.